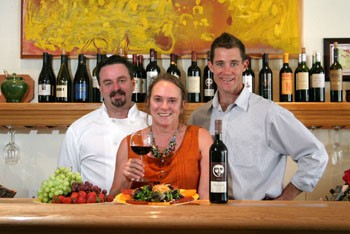 On Tapas the World

In Sonoma, there’s a Portuguese restaurant (La Salette), and up until recently Glen Ellen had a Latin-flaired restaurant (The Girl and the Gaucho), but no straight-ahead Spanish cuisine was to be found in Sonoma Valley–or, for that matter, the North Bay. That is, until Anne Thornton took over the old Wild Thyme Cafe in downtown Sonoma and converted it into Cafe Andalusia, a wine bar, marketplace, and restaurant with plates both big (sandwiches, salads, and paella, mostly) and small (yes, tapas).

The space is open and bright, with silk bougainvillea vines winding up its blue-tiled pillars. Images of bullfighting and flamenco dancing decorate the white walls. Brightly colored pillows line the bench seating along the front windows, adding a very subtle Moorish touch. Out back, there’s a patio with ample seating and a cloistered courtyard setting.

In the corner are three refrigerated display cased filled with cheeses, sausages, pickled items, and pastries. A Sonoma Valley day tripper could easily come in and get some supplies for a simple picnic lunch.

But I had come for an early dinner, alone, at the grossly unfashionable hour of 5:30 (even for Sonoma that’s early). The dining room was empty, save for two tittering older New York women who seemed to think of tapas as luncheon dishes.

Since the fun of tapas is sharing them, for this visit I steered toward the larger plates: a citrus salad ($7) and the sandwich special called the SAT ($8). A BLT with Iberian flair, the SAT featured serrano ham, arugula, and big, fat slices of ripe heirloom tomato. The name brought to mind standardized tests, though this SAT was the most enjoyable sandwich I’ve had in months.

The citrus salad, with its slices of orange, grapefruit, and red onion, tart vinaigrette, and cornichons on the side, was a little too acidic for my tastes; more of the contrasting avocado would have been welcome.

The next visit, Mr. Bir du Jour and I noticed how sparsely populated, once again, the dining room was, but out back, every single table on the patio was filled. Our server brought out bread and two ramekins, one filled with olives and the other with whole picked garlic cloves, surprisingly sweet and mellow.

On Friday nights, Cafe Andalusia offers Friday Night Flights–three food and wine pairings for $10–which turned out to be a wonderful way to start off the evening. That evening the flight consisted of Sonoma County pinot noirs, a wine I normally would not have picked to wash tapas down with, but hey, that’s the fun of a flight. The first pairing was a silky Robert Stemmler 2000 with an amazingly mild goat’s milk cheese from the Pyrenees, Jean Faup. “It’s a cheese for people who don’t like goat cheese,” said chef Niki Van Rthanyi.

The second pairing was of a jammy and tannic Acacia 2001 with serrano-ham-wrapped plums, salty-sweet morsels that I would have preferred paired with the velvety Benziger 2000 (that came with a tender chunk of grilled lamb whose paprika and cumin seasoning were too spicy-hot for the wine).

On to the tapas. Of course you have to order the tortilla Española ($6), just because it’s the quintessential Spanish tapa. Cafe Andalusia’s version is a wedge of thinly sliced and slightly underdone potatoes suspended in a firm egg mixture. I’m more inclined toward tortillas Españolas whose potatoes have been browned in more olive oil, though it’s hard to toe the line between too oily and undercooked. A handful of shredded romaine lettuce and a fresh tomato relish came on the side.

Mr. Bir du Jour had been ogling the cordero a la plancha ($11)–grilled lamb chop with pomegranate glaze–on the menu, and its reality was even better, with the pomegranate glaze not sticky-sweet but tart and complex. Three lamb chops rested atop a caper-studded couscous, which gave the whole works a nice Moorish flair.

Spanish meatballs (albondigas caseras, $6) came out in the traditional little round red earthenware dish familiar to tapas lovers. Fall-apart tender in a tomato-rich gravy, the meatballs were on the bready side, though perhaps that’s the way they’re intended to be.

Ensalada romana ($6.50) was basically a caesar salad, with whole, crisp heart of romaine leaves, an anchovy dressing, and big, crunchy croutons. Where the salad departed from the norm was in its topping of four fat anchovies, fleshier and not quite as salty as the Italian ones typically seen. I almost mistook them for skinny sardines at first.

Our little table filled up with plates fast; either more consistent clearing of empty plates or a bigger table would have been helpful. While the waitstaff was hit-and-miss in this area, they were friendly and courteous throughout our visit, and we were comfortable nonetheless.

Be smart if you go to Cafe Andalusia, and order the crema quemada ($6), the Spanish version of crème brûlée. Our crema quemada was better than any old silly crème brûlée I’ve had yet, rich and simple, its sugar crust perfectly caramelized.

Earlier we had noticed a huge bundt cake in the pastry case, and we were surprised when our server brought a towering piece of it over to us, on the house. “Jeff makes our cakes,” she said, referring to general manager and wine guy Jeffery Cook, “and we just give them away sometimes, because we like them to stay fresh.” After an entire meal dabbling in Spanish cuisine, digging into a bundt cake was a bit of an anomaly, but the tender, spicy apple cake was a perfect example of what makes American home baking so great.

The wine list is compact and organized into Sonoma/Spain sections, but it merited further exploration, which we’ll be happy to return for; we still have the paella and plenty more tapas to try.