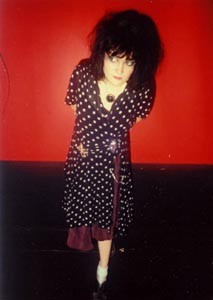 Words That Matter: Exene Cervenka puts her songwriting talents to use in her recent work.

“I’m neither optimistic nor pessimistic about the future of the world,” says Exene Cervenka. “I’m an artist, a writer. For the most part, I just feel like an impartial observer. I watch and listen in on life and try to help people make some sense of it all, because sometimes you can’t get in touch with your feelings.

“I guess it’s my job to find the words that evade most people to help them express those feelings.”

As a singer and songwriter with the legendary L.A. punk band X and more recently as a solo performer, Cervenka has ridden the crest of the underground music scene in the ’80s and beyond. X wasn’t the first punk band to make the scene in Los Angeles, Rolling Stone once reasoned, but it definitely was the first one that mattered. At a time when most L.A. punk bands merely aped the sound of their London and New York counterparts, X invented a unique metal-edged, high-octane rockabilly-based sound that stood head and shoulders above the pack, thanks to deep roots in the storytelling tradition of Woody Guthrie.

Recent reissues reinforce the notion that Cervenka and her band mates were pioneers of an edgy brand of Americana rich in country-inflected harmonies and guitars, unafraid to explore the nation’s seamy underbelly, and inviting comparisons to film noir and the work of Bowery bum-cum-Beat poet Charles Bukowski.

Music writer J. D. Considine once opined that the band’s strong suit was that its early songs were “so obviously and audaciously intelligent, with verses that read more like poetry than punk doggerel.”

So it’s no surprise that Cervenka has a real talent for spoken-word performances and poetry. She brings her wild gifts to Petaluma this week at celebration of poetry and song.

Born in Illinois, Cervenka moved at age 16 to Florida. She attended a Catholic school, developing a deep mistrust of orthodox religions and a growing sense of rebelliousness. Around that time, an older sister inspired her to start writing poetry. “She was a very intelligent, creative person who was always handing me a blank journal and encouraging me to write,” Cervenka recalls. “You know, sometimes you look up to an older brother or sister like no one else, and no matter who you meet, that never changes.”

Cervenka later wrote about that relationship in “Come Back to Me,” an early X song about her sister’s suicide at age 26.

Her own music, first heard on 1990’s solo debut Old Wives’ Tales, an underappreciated post-punk classic, finds Cervenka shedding her rock veneer for a folksy raiment and draping her provocative song poetry in semiacoustic folk rock that leaves plenty of room for slyly turned lyrical phrases. It’s an unsentimental landscape of coyote-infested backyards peopled by gigolos, apocalyptic fanatics, and white-trash debutantes, all surveyed by a pretty though mournful voice.

In that work, the searing guitar solos, urban canniness, and existential allusions that were X’s trademark give way to predominantly countrified instrumentation, homespun common sense, and religious symbolism. The album also features a powerful spoken-word piece, “Gravel,” a prescient fantasy that gains new meaning in this post-9-11 era. It is a tense prose about a radical young couple who, loosened by liquor, decide to even the score on America’s trail of broken promises by dynamiting Mount Rushmore.

The song earned Cervenka a spot of the U.S. Secret Service hit list of potential wackos; the agency still checks on her whereabouts anytime the president is in the neighborhood.

Cervenka, who thinks of herself “as a writer first,” likes the directness of the spoken-word genre. “Music is a more complex way of receiving verbal information, but sometimes it’s great to just sit back and listen to spoken word,” she says. “And I think the growing interest is a good sign.”

Exene Cervenka performs Sunday, Aug. 31, at 4pm–along with Patti Trimble and Al Young, and others–at Rhyme, Rhythm, and Song III at the Phoenix Theatre, 201 Washington St., Petaluma. Tickets are $10. The event, sponsored by the Literary Arts Guild, is a benefit for the Petaluma Poetry Walk and Sonoma County Book Fair. 707.544.5913.