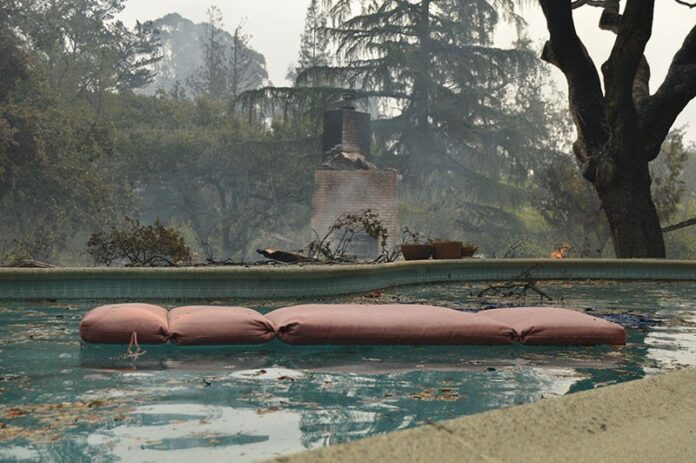 Sacramento was busy putting out fires this year

Count ’em: California passed 28 fire-related bills in the aftermath of the October 2017 firestorm—grappling with everything from PG&E’s role in the fires to the role that electric garage-door openers conspired to kill people as they tried to evacuate.

The fires hit on every corner of civic, political, economic and social life in the North Bay. This sampling of bills signed addresses some but not all of the aftermath and what to do prevent, mitigate or otherwise lessen the impact of California’s new normal of a year-round fire season.

Senate Bill 824 Prevents insurers from canceling or not renewing insurance claims just because the place being insured is in a designated emergency area. This ruling will be in effect for one year after a property in question is declared an emergency area. It also requires insurers to report possible fire risks of their properties to the insurance commissioner by April 1, 2020, and forbids them from canceling insurance on a structure that is already damaged by fires. The bill was sponsored by Insurance Commissioner Dave Jones, who says the collected data will help make a more comprehensive map of California’s changing insurance marketplace.

Senate Bill 917 This law is intended as a legislative clarification and states that insured homes lost to mudslides, debris or other natural disasters would still be covered by wildfire polices—as long as such disasters are directly attributed to earlier wildfires. This law came into effect to help homeowners in places such as Monetico, where fire-induced mudslides destroyed the homes of many who had fire insurance but not flood insurance.

Senate Bill 1260 Most of SB 1260 is meant to combat the drier weather conditions in California by setting new standards for prescribed burns (for instance, by managing the air quality of the burns), as well as allowing Cal Fire to give non-binding advice about building in areas with a high risk for fires. There’s also new regulations built into 1260 over who can create and monitor prescribed burns, and where they can be undertaken. Additionally, it requires the Cal Fire to work with other agencies to enhance fire-safety education for the general public. Pro tip #1: Don’t throw that cigarette butt out the window, yo.

Senate Bill 896 Extends the sunset date of an already existing anti-arson law from Jan. 1 of next year to Jan. 1, 2024, as well as increasing the threshold of convicted arson from $7 million to $8.3 million The purpose, duh, is to prevent arson-based wildfires. What’s funny-not-funny about this bill is that readers may recall that right-wing website Breitbart.com fingered a homeless undocumented immigrant in the North Bay firestorm in the days after the inferno broke out. Turned out to be a bunch of fake news, and interim Sonoma County Sheriff Rob Giordano blasted the Breitbart bozos in a memorable presser last October at the Sonoma County Fairgrounds. We still get all tingly recalling Giordano’s pungent push-back to the lie.

Senate Bill 894 This law is meant to help homeowners who are underinsured and don’t have the money to rebuild their burned-up homes—a pretty common dilemma. The bill provides flexibility to homeowners to move around some of their losses by shifting it from one type of coverage to another. They only qualify for this if (a) it’s directly after a declared disaster, (b) they’ve lost everything and
(c) they are underinsured. The bill also extends the additional living expenses program for people with total loss from two years to three, and provides fire survivors two chances to renew their insurance, instead of one.

Senate Bill 901 Easily the most controversial fire bill passed this year. Senate Bill 901 determines the culpability of companies such as PG&E in the fires, determining how much they need to pay in damages. It allows the company to slacken some of the financial burden wrought by massive wildfires by off-loading costs onto its customers. It also contains requirements that PG&E increase fuel-reduction efforts and do a better job clearing vegetation from around its power lines. The utility was found by state regulars to be the culprit in 12 of the North Bay fires last year. This year, downed PG&E power lines were almost immediately identified as the culprit in a Marin County fire —the Irving fire—last month that scorched some 150 acres in Samuel P. Taylor State Park. PG&E has embarked on big public-relations campaign assuring customers about its commitment to fire awareness—and has emphasized the new normal of global climate change as it has fought to limit liability for the damage caused by the 2017 fires.

Senate Bill 969 The devilish fires had lots of details to deal with, and this bill requires all automatic garage-door openers to have backup batteries in case of catastrophic power failure. This is in response to the October fires causing massive power failures, leaving many unable to open their garage doors to escape, including Bill Dodd himself, who sponsored the bill. At least five victims were found in the burned-out remains of garages.

Napa County plans to honor the anniversary of last year’s wildfires with a practical and potentially soothsaying gesture: at 9:30am on Oct. 9, the county will test its upgraded Wireless Emergency Alerts (WEA) system. At that moment, anyone in Napa County with a cellphone will get a text message. Don’t freak out: it’s only a test.

The WEA is an emergency network maintained by the federal government. A region-wide breakdown in the emergency alert system in place last year, via the opt-in Nixle program, meant that many residents only got the message to evacuate when a law enforcement official banged on their door in the middle of the night as the flames licked at their mailbox.

The test on Oct. 9 comes after Napa County officials were trained in using the WEA system and received certification from FEMA. Officials have jumped into the fray with assurances that if there’s a next time, they’ll be at the ready with digital warnings.

A big difference between Nixle and WEA is that the former is an opt-in system, while WEA automatically sends a text message to anyone in the region with a cell-phone (unless they’ve turned off their emergency-notice settings). Napa County did send out a text message about the fires last year—but the only people who got them were those who had signed on to the county’s emergency-alert system.

Napa County deputy county executive officer Molly Ratigan, in a statement, says Napa County decided to roll out its WEA system on the one-year anniversary to sync with other goings-on in the county that day. On Oct. 9, county supervisors will acknowledge the anniversary, receive presentations on recovery efforts and get reports on “steps that have been taken to improve readiness for future disasters.”

The Napa County Office of Emergency Services will ride herd over the test of the county’s new Integrated Public Alert and Warning System (IPAWS).

The county notes in a press release about the upcoming WEA rollout, that people who are already signed up for Nixle could get the test message twice, since the county can link WEA messages to the Nixle system. That’s good news for Spanish-speaking residents of Napa County: the WEA messages will only be sent out in English, while the Nixle messages are bilingual.
Napa County residents are encouraged to check their emergency-alert settings on their phones before the test on Oct. 9.