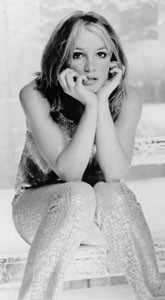 Naming the year in two notes

It’s Celebrity Death Match at its most raucous. In the red corner, wearing low-slung jeans and a scanty halter top, it’s pop princess Britney Spears, trying to prove that there’s life after the teen-pop phenomenon that rocketed her up the charts three years ago. In the blue corner, looking paunchy and decidedly middle-aged, but determined to regain their crown as best album-oriented rock band of all time, it’s Pink Floyd.

For the past three weeks, Britney’s long-awaited eponymous third LP has gone toe-to-toe with Pink Floyd’s Echoes (Capitol), a two-CD greatest hits collection, both hitting the stores in the same week. Britney debuted at number one; Pink Floyd claimed the number two spot.

In a year that gave us the XFL, the Bush presidency, and the Sept. 11 terrorist attacks, the Billboard pop chart at year’s end is a tuneful battleground that reflects the opposing forces at war within the soul of America.

Can you still take comfort in the vapid trappings of popular culture, or are you looking for more meaning in your life?

Britney, of course, is out to prove something. Her disco beats are grittier, her songs more reflective. And there’s a clear message. “Overprotected,” “I’m Not a Girl, Not Yet a Woman,” co-written by Dido, and “What It’s Like to Be Me” set the tone. And just in case you miss the point, “I’m a Slave 4 U” let’s you know Britney’s working overtime for your sake.

At a time when President Bush is promoting tourism and asking millions of unemployed workers to spend their way out of the recession, Britney is the corporate America’s poster child, the material girl du jour.

On the other hand, Pink Floyd speaks to that side of the national psyche that senses there’s more to life than a new Lexus, Xbox, and Armani suit. Sure, this is a washed-up band that hasn’t had a hit in three decades. But for all their songs of angst, alienation, and social decay, Pink Floyd’s hard rock still resonates with a huge segment of the record-buying public.

And remember that for all of society’s obsession with success, this is a band whose biggest commercial hit–1973’s smash single “Money”–derided the pursuit of the almighty dollar and helped vault the conceptual masterpiece Dark Side of the Moon on to the charts for hundreds of weeks.

As a body of work, Echoes evokes sometimes psychedelic, often ponderous art rock filled with songwriter Roger Waters’ frequently mundane and even maudlin ruminations about everyday life, with occasional experimental excursions into the frenetic, the surreal, and the terrifying. It’s the perfect soundtrack for a post-Sept. 11 world struggling to redefine its values and searching its tired soul.

Britney is a willing slave to the machine, happy to lead you down the garden path; Pink Floyd offers cautionary tales about authority (“Another Brick in the Wall”), comfort to the forlorn (“Hey You”), and not so gentle reminders that your casual compliance to the system is bleeding you of your humanity (“Sheep”).

Heed their call or cue up for Britney’s ear candy–consider it a pop music lesson in duality.