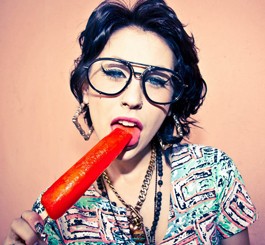 YOU AIN’T NO BARBIE: Leave it up to a 21-year-old white girl to bring hip-hop focus back to the Bay Area.

A few years back, comedian Chris Rock killed on Conan O’Brien’s old show with a joke about the apocalypse. “The world’s coming to an end, Conan,” he said in his famous bark. “The best golfer’s black, and the best rapper’s white!” While both Tiger Woods’ and Eminem’s status have suffered lately, the crossing of such arbitrary cultural lines is still jarring for many. Case in point: the hyper-meteoric success of Oakland rapper, filmmaker and artist Kreayshawn.

“Man, [a year ago] I was staying with my grandpa in east [Oakland], probably editing video, making $400 for a video and just chilling,” says the 21-year-old via phone from L.A., where she’s staying currently. “It’s funny, there’re people I used to reach out to all the time and be like, ‘I’m an up-and-coming blah blah blah, fuck with me,’ and they would turn me down, and now they’re hitting me up. It’s crazy to see how fast things can change.”

Crazy seems an understatement, considering the kind of year Kreayshawn has had. Born Natassia Gail Zolot, Kreayshawn was raised in Oakland by her mother Elka Zolot, guitarist for punk bands Bitch Fight and the Trashwomen. After dropping out of high school and later out of a scholarship at the Berkeley Digital Film Institute, she kept busy directing videos for local rappers like DB tha General and Lil’ B. Kreayshawn also released a mixtape and a track called “Bumpin’ Bumpin’,” a dubstep ode to clubbing. It didn’t make much noise. Its follow-up, however, was like an earthquake.

In mid-May, Kreayshawn’s “Gucci Gucci” video hit YouTube, featuring the petite, pierced and tattooed artist boasting her singular G-Punk style, Amy Winehouse mascara and friends from it-collective Odd Future. Along with her DJ Lil’ Debbie, Kreayshawn ghostrides an old Honda, smokes swisher blunts and floats atop a whirring bass-heavy Cali beat to deliver the chorus of the summer: “Gucci Gucci, Louis Louis, Fendi Fendi, Prada – Dem basic bitches wear that shit, so I don’t even botha’.” She raps about dealing drugs, toting a gun and getting bitches—the conventional male rap persona, emanating from a cute little white girl in a bare midriff and Minnie Mouse headband—culminating in the ultimate post-feminist boast: “I got the swag, and it’s pumpin’ out my ovaries.”

While quintessentially Bay Area in its hybrid style and slang, “Gucci Gucci” was a breath of fresh air that exploded on the internet. Within two weeks, there were 2 million views; at press time, it’s over 12 million. In the ensuing whirlwind, Kreayshawn picked up an MTV Video Music Award nomination for Best New Artist and a contract with Columbia Records rumored at $1 million.

Easily, “Gucci Gucci” is the biggest local song to break nationally since Vallejo’s E-40 and Oakland’s Keak da Sneak released “Tell Me When to Go” five years ago during the hyphy craze. But it’s also a benchmark moment for 21st-century DIY artists, with Kreayshawn and her White Girl Mob crew using free social media for effective promotion. Even the song’s hypnotic beat was born of her Twitter correspondence with DJ Two Stacks from Long Island, N.Y.

With “Gucci Gucci,” Kreayshawn officially became a star. But she’s also been a target for the most vicious vitriol in recent bandwidth, from bloggers and real journalists alike. Kreayshawn has been called a minstrel, the new Vanilla Ice, an exploiter of black culture, a degrader of black women and an enabler to suburban posers. One wonders which is more of an offense—her race, gender or general deviation from traditional hip-hop mores.

“I definitely think it’s a bit of all of the above,” Kreayshawn says. “Being a female in general, it’s hard to come up in the hip-hop game because they want to pin you against other females. Also, being white is just a big thing,” she continues, “but I don’t want people to look at me as ‘the female white rapper,’ because I’m an artist before anything.”

Regional concerns also rear their head. “People want to question your credibility just because you make a type of music. I’m from Oakland, and it’s hood in Oakland,” she says of the rampant queries. “I grew up in the hood, but I don’t feel like it’s important to flaunt where I’m from or try to convince people. I’m just creating, I’m just making music.”

But hip-hop music has become less about the actual music since gangsta rap took over in the early ’90s. Hip-hop fans and the media are more obsessed than ever with the notion of being “real,” defined not only by race and class, but now also by region and rap sheet. One’s proximity to crime, violence and drugs is directly proportional to acclaim. Can you imagine if Miles Davis had been shunned because of his wealthy upbringing? Was Louis Armstrong more important because he endured extreme poverty as a child?

That’s a lot of cultural projection for clever young lady to deal with. Last May, Kreayshawn’s problems were compounded when she cited lyrics from the rapper DMX on her Twitter feed; DMX’s own lyric contains the word “nigga,” but many critics either attributed it to Kreayshawn herself or were furious she could co-sign on it. Kreayshawn has repeatedly stated that she doesn’t use the word, but her fellow Oakland rapper and White Girl Mob member V-Nasty does, and unapologetically so—leaving Kreayshawn to answer to it endlessly in interviews.

Kreayshawn’s response thus far has been that in Oakland, it’s common for people to call each other “nigga,” no matter the race, and the word has become benign; even “dumb” and “stupid” mean something different around these parts. (Oakland rapper and mentor Mistah F.A.B. has posted YouTube videos in defense of V-Nasty, asserting the same.) “I definitely think it’s hard for Bay Area people to break out because only people from the Bay understand ‘people from the Bay’ type of things,” she tells me. “That’s where I’m at right now. Everyone sees me as extreme or crazy.”

So far, Kreayshawn’s detractors have been outshined by friends in high places like Drake, the Red Hot Chili Peppers and even Snoop Dogg. (“It was pretty crazy sitting in the studio recording with him, just smoking hella weed and just chilling.”) And despite the haters, Kreayshawn keeps her eye on the prize. “There’s a lot of stuff that just pops up everyday, but I try to keep my mode off the internet and into what I’m doing,” she says. At the moment, that means completing her debut album for Sony, playing live, moving back to Oakland and possibly bringing a moon man back to the Bay Area . . . one way or another.

“We’re going to take V-Nasty to the VMAs,” she says, “and have her pull a Kanye or something.”

Kreayshawn plays a sold-out show on Thursday, Aug. 25, at Slim’s in San Francisco.