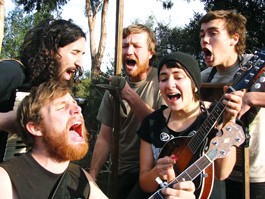 Squattin' and strummin' with Blackbird Raum

Years before the members of Blackbird Raum ever played their first show, they lived together in abandoned buildings in Santa Cruz. With no electricity, they picked up whatever instruments they had access to—banjo, mandolin, accordion, washtub bass, washboard. “That’s why we learned to play folk instruments,” says mandolin player Mars. “They were lying around.”

The idea of forming a band came a while later, after discovering a group from Eugene, Ore., called the Sour Mash Hug Band. “All of us were scraping by in the most squalid manner possible,” says banjo player Caspian. “The idea that these people played on the streets and got 30 bucks, we thought they were millionaires.”