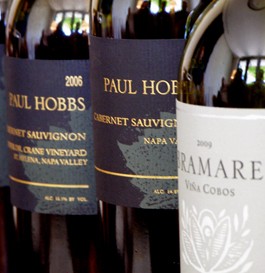 Times were changing in upstate New York. Wealthy investors moved in, threatening with obsolescence family farms like the one Paul Hobbs grew up on. So one night his father, having noted that local wineries paid a premium for grapes, made an appeal to the family in the form of a tray of paper cups filled with a mysterious orange liquid.

Everyone—although his mother forbade spirits in the house—loved it; it tasted like apricot juice. It was a Premier Cru Sauternes. Hence, Hobbs spent his college summers replacing apple orchards with grapes.

Wealthy outsiders, apple trees supplanted with grapes? All too familiar to residents of West Sonoma County. Hobbs, now a globetrotting consultant and owner of his own brand of ultra-premium wine, has lately attracted attention due to a legal dispute that ended with his taking ownership of several parcels adjacent to his winery. For Hobbs, it was an unexpected windfall after he’d indulged his neighbor up to the limits of reason; others cast the story as the fleecing of an old curmudgeon by the Villain, Paul Hobbs. Regardless, the endgame was the removal of a line of trees that had screened the winery from view. Now that it’s in plain sight, let us take a closer look.

The tasting room, Lindsay House, is a modern, concrete affair, with an art gallery interior: abstract canvases, designer gas fireplaces, and sofas the gray-green hue of a 1950s Remington Quiet-Riter. On a recent visit, a diverse group, led by an engaging and informed staff, included a pair of comely Brazilian physicians, a zestful Southern California restaurateur and aficionados from near and far.

From Mendoza, Argentina (“The Malbec Diaries,” Bohemian, May 7, 2008), the 2009 Bramare Malbec, Luyan de Cujo ($40) floods the palate with licorice and lingonberry syrup. From Napa Valley, the 2006 Beckstoffer Dr. Crane Vineyard Cabernet Sauvignon ($150) has fresh black cherries over fine, new leather, with vibrant black cherry and plum fruit flavors that carry through. Similarly youthful and bright, the 2006 Beckstoffer To Kalon VIneyard Cabernet Sauvignon ($275) shows plum-jam, cedar and chocolate and a finely-knit finish. “Fantastico!” as the Brazilians put it.