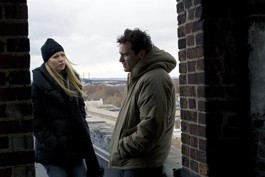 'Two Lovers' is a melodrama with little drama

FAMOUS MOMMY Gwyneth Paltrow has famously stated that now that the kids are here, she is restricting her career to just one movie a year. Curious, then, that Two Lovers would have been her choice for 2008. Paltrow’s role is largely concerned with flipping her hair about, and while her long blonde locks certainly have their own dramatic tension (Will her part hold in the wind? Do her tresses look better in a ponytail or under a wool hat?), her Michelle is an uninspired cipher, a golddigger with a heart of gold who is trying to separate her married lover from his wife. What attracts Leonard (Joaquin Phoenix) to Michelle is that she is such an unabashed goy. “What’s that?” she asks, wandering his parent’s stifling apartment. Well shucks, Michelle, it’s a dreidel, and they made it out of clay.For his part, Phoenix has announced that Two Lovers will be his last film before he embarks upon what promises to be an unusual hip-hop career, and he does as best he can with director and co-writer and co-producer James Gray’s mawkish work. Far better he had ended it with Johnny Cash. Part Brighton Beach Memoirs without the laughs—indeed, part Annie Hall without the laughs—Two Lovers follows Leonard first into the seawater muck off the Brighton Beach pier where he throws himself in the film’s establishing shots.

From there, the cinematography remains stubbornly stained an unpleasant green, an unimaginative metaphor expressing poor Leonard’s moldy world. Leonard has just come home to live again with his parents, the understated mother-smotherer (Isabella Rossellini) and her worried husband (Moni Moshonov). Mom and Dad own a dry cleaning shop where Leonard works and are in negotiations to sell the business to another family, the Cohens, who have a beautiful daughter, Sandra (Vinessa Shaw), who is inexplicably drawn to Leonard. Leonard has suffered some terrible time and is still recovering. The boy is “sensitive” and clearly suicidal. Yet Sandra nonetheless yearns for him. Meanwhile, Michelle, “trouble” stamped all over her lovely frame, moves in upstairs. She and Leonard have a not-so-cute meet, and she adopts him as a needy brother. He, of course, lusts after all of her WASPy fabulousness. As Leonard’s family and the Cohens get closer to closing the deal, so does Sandra try to get closer to Leonard. She, of course, claustrophobically represents family, obligation, books and PBS. Leonard resists until finally taking her in his grimy boy’s bed after falling sway to her charms while his stern rabbinical ancestors scowl down from the walls. That he will betray her terribly is as obvious as a dreidel.

Phoenix’s job here is to make Leonard’s boy-man’s plight shine bright to the audience. He shambles, he mutters, he takes listless photos. It’s not Phoenix’s fault that James Gray chose the fatal triangulation of writer-director-producer; such myopic immersion always results off-kilter, and Leonard is not a sympathetic character for most over age 16. Rather, “Clean up your room!” “Man up!” “Take your meds and shut up about it!” reverberated around this viewer’s brain as Leonard tries and fails to go gentile into that good night.