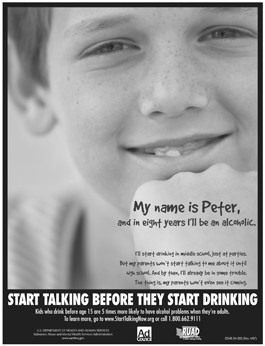 TOOTHY: Developed by the National Ad Council in conjunction with the Washington State Coalition to Reduce Underage Drinking, this ad packs a punch.

Among Sonoma County teenagers hunting for verboten booze, it’s common knowledge that Monte Rio and Guerneville are some of the easiest places to get it—but not for long. The recently formed Russian River chapter of the Coalition to Prevent Underage Drinking is rallying the community to put an end to easy access.

Twenty-two-year-old Sonoma State University graduate Jessica Lenth, officially the Environmental Prevention and Friday Night Live coordinator for West County Community Services (“Try fitting that on a business card,” she says) currently oversees the group, one of many across the nation that fan out from a parent organization formed in 1997. Her mailing list stands at about 20 so far, and Lenth says she sees about half of the members at any given meeting.

“It’s a voluntary coalition, so finding time is always a challenge for folks,” she says.

A native of Santa Cruz County, Lenth has seen her fair share of alcohol-related tragedy, which she says motivated her to get involved with similar groups through high school and college.

“My high school had the unfortunate event of losing quite a few students to drunk driving fatalities,” she says. “It was something I was not interested in ever having to go through again, or watch anyone else go through, for that matter.”

The Coalition uses an environmental prevention model, which Lenth explains concerns access, not ozone. The group focuses on the long-term impacts on a community through the policies and laws surrounding alcohol possession, working from the inside out.

“We’re working to change the social norms and the community norms in general. Guerneville, like so many communities, is very unique and has its own ideas about what’s acceptable and what’s not,” Lenth says. “So we’re working with the community to become more aware about the message that they’re sending to younger generations.”

Cheap beer and peach Schnapps from Mom and Dad’s liquor cabinet have long tempted teens, but Lenth says the increased use of alcoholic beverages in media context has lead to a higher level of social pressure in recent years.

“For a lot of young people there’s definitely that stereotype that everybody drinks and it’s what you have to do to be popular,” she says. “But when we’re surveying students and collecting data, only about 50 percent admit to alcohol use. So it’s definitely not the norm.”

The Russian River-based group works through two branches: an adult voluntary coalition and high school recruitments, who in turn create on-campus chapters and sit in on adult meetings as representatives for the younger members of the community.

Lenth emphasizes that the Coalition does not target young people specifically.

“A lot of what we see in prevention is that people want to go out and talk to kids, and if kids just knew the risks of underage drinking. . . . but you don’t see a lot of long-term behavioral changes that way,” she says. “So instead of putting it all on the young people to make better decisions, we’re really focused on having the community make better decisions on behalf of the young people.”

“Someone who’s under the age of 21 goes into a store with their valid California I.D. and tries to buy alcohol,” she explains simply. “They’re never allowed to lie about their age. In 2008, 57 percent of the stores still sold when they knew the person was underage.”

With statistics that high, Lenth and her crew have their work cut out for them. The Coalition is funded by the Department of Prevention and Planning in Sonoma County, and Lenth adds that the Russian River area is one of seven communities that have money available to set up these preventative groups.

“We’re lucky enough to have a lot of support in terms of money,” she says. “We sit down and figure out our community needs assessment—what are all the issues around underage drinking in the community—and then develop a plan for each year and try to carry that out.”

The group is currently growing by word of mouth, carrying out their community-based agenda through law enforcement and workshops held for youth in the county like Friday Night Live, a program that Lenth coordinates.

“Because we’re county-funded, we have to be very careful about how we lobby, so I would say I do a lot of education about upcoming policies or potential areas in which legislators could be doing more,” Lenth says, mentioning a recent incentive to increase the alcohol tax by five percent.

Lenth emphasizes that controlling access to alcoholic beverages is the coalition’s primary goal.