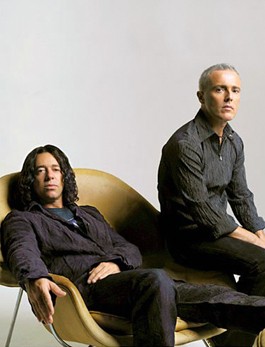 I t was the end of the 1980s and Curt Smith from Tears for Fears had it all: a string of hit singles, his face all over MTV and hundreds of thousands of fans. And then, having lost his passion for music, he left it behind, packing up and moving to New York, leaving the other half of the band, Roland Orzabal, to carry on alone. With the band recently reunited and on the phone from his Los Angeles home, Smith considers what he and Orzabal—his best friend since age 13—came to odds about almost 20 years ago.

Smith’s departure at the end of the ’80s was a timely exit. Tears for Fears virtually defined “out of place” in the image-obsessed, Flock of Seagulls-laden 1980s pop hit sphere. With their biggest hit “Shout” based on the primal scream therapy of Arthur Janov; with “Woman in Chains” the most effective feminist statement of the ’80s written by a man; with their 1985 album Songs From the Big Chair named for a miniseries on associative identity disorder, the band always inspired a deeper intellectual connection than most ’80s fluff.

“We don’t really write love songs,” Smith says. “They normally involve politics or personal politics, and by that I mean psychology, to some degree; relationships, to some degree. There has to be some sort of meaning in it for us—otherwise it’s a pointless exercise. That’s just how we are as people. And it doesn’t mean that anyone has to understand it.”

Of course, in 1985, everyone understood Tears for Fears. Flush with the No. 1 success of hits like “Everybody Wants to Rule the World” and “Head Over Heels,” the two entered the studio for a follow-up, The Seeds of Love, further tipping the group’s political slant. Most who heard the catchy “Sowing the Seeds of Love” playing on every radio in 1989 might have been surprised to actually read the lyrics, liberally peppered with references to government corruption, starvation, education and greed. The album also explored music outside their synth-pop safety zone.

“We toured America quite a lot during that period,” Smith explains, “and we started to learn more about American music. If you listen to the Seeds of Love album, you can hear bits of Little Feat, you can hear, in the case of ‘Woman in Chains,’ a bit more gospel, a bit more soul. Steely Dan, even. And this was the first time we’d really listened to this kind of music. In England, it would never get played anywhere.”

The album made a splash, but musical and personal differences took their toll—especially, Smith says, “when you’re living in each other’s pockets every day of the week because of work.” After the split, Orzabal kept the Tears for Fears name for 1993’s Elemental, an underrated gem in the band’s timeline that included a scathing song, “Fish Out of Water,” transparently aimed at Smith and his decision to leave. Orzabal sings: “And on the crucifix his mother made / Hangs one more martyr to the hit parade / You’re dreaming your life away.”

“I thought it was quite amusing,” Smith says of the song today. “That was a song obviously written out of anger. I’d left the band, he was pissed off, and fair enough.” (Smith recorded a response, “The Sun King,” on his next solo album.)

Years later—after a Gary Jules cover of the group’s “Mad World” from the film Donnie Darko slowly became a red-hot hit, and before Kanye West sampled “Memories Fade”—Orzabal asked to meet with Smith, the two had dinner, and the next thing they knew they’d recorded a major comeback album, appropriately titled Everybody Loves a Happy Ending, replete with a buoyant, vintage feel. Pleasantly surprising even the most trepid fans, Happy Ending manages to retain a classic Tears for Fears sound without sounding formulaic or contrived. A successful tour followed, the two get along again, and Smith says it’s almost just like old times.

As for the vindictive songs they once wrote for each other? Water under the bridge, says Smith—even though he still feels he got in a humorous last word.