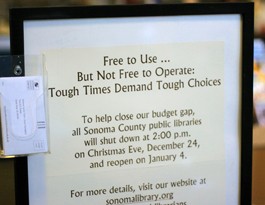 As the place where people gain information, skills and inspiration for free, libraries are essential to the functioning of a truly democratic society. But as stated on signs recently placed around Sonoma County Library branches, the library is “free to use, but not free to operate.” On Dec. 24, a large segment of the North Bay community will lose access to local branches for 10 days, as the county library system begins a block closure running through Jan. 3. All services will be shut down, including online catalogue access and internet access as well as fee and materials collection.

Some 2.6 million people across the county visited their local libraries last year. For patrons who depend on the libraries for the internet, job search data, general entertainment and study needs, 10 days is a long time to be out in the cold.

How did it get so bad? According to library director Sandy Cooper, difficult decisions had to be made after a $1.7 million budget shortfall. With the fall in home values across the county, the Sonoma County Library System, which gets 90 percent of its income from property taxes, was forced to cut its operating budget. The entire staff accepted a 5 percent pay cut, and nine employees have agreed to take early retirement, but even those budget cuts are not enough to close the gap.

“It was the best way to handle the situation, to quickly save the money without really having a long-term impact on programs and staffing,” Cooper says. “We have no idea how long these hard times are going to go on, and our goal is to maintain the staff and the library service at the highest levels we can so that when we come out of it, we can hit the ground running and continue to provide the best service we can.”

Library decision-makers are currently waiting “on pins and needles,” according to Cooper, for next year’s property tax income projections, due from the County Assessor’s Office in January 2010.

Margaret Lynch, chair of the Library Commission—the entity that makes the fiduciary decisions—says that the block closing is the result of a “contorted and ineffective structure for libraries.” Lynch claims that the library is not generously funded to start with, so they were particularly affected by the drop in property tax income.

“We don’t want to close, but certainly something eventually has to be done about the tax structure in the state of California if we are going to continue to have services, i.e. libraries, schools, etc.,” says Lynch. She says that the closure of the library is painful all the way around, for patrons and staff.

It’s not only the county libraries that are suffering as a result of the recession. On Jan. 13, the Santa Rosa City School Board will announce whether to eliminate seven teacher-librarian positions in order to cut $5.6 million from next year’s budget.

Santa Rosa City School Board member Tad Wakefield advocates cutting the teacher-librarian positions if it means that class sizes will not be increased. “I know it upsets people who love books and libraries, as I do, yet it is a greater disservice to our 15,000 kids to jack up their class sizes to unconscionable levels before sending seven teacher-librarians back to the classroom where they can still serve our kids in an effective, albeit significantly different, way,” Wakefield argues.

Connie Williams, past president of the California School Library Association, says that students need access to the information and technology available in libraries in order to succeed in the 21st century. Williams believes that kids who read well do better not only in school, but throughout life. It is the teacher librarian who often puts those books into the kids’ hands. Williams says that with cuts to both school and county libraries looming, those from disadvantaged circumstances, who cannot just drop by a bookstore to pick up a new book, will be the ones who are deprived.

“School libraries are funded by school districts, and public libraries are funded through a different set of funding sources,” Williams explains. “The two don’t really have anything to do with each other fiscally, but what happens—in having the county libraries shut down over the break, for example, and taking away from the school libraries—means that there are children who have no access whatsoever to books.”

People who would like to support strapped county and school libraries do have options. Donations to the Public Library Foundation can be made at any branch, and new members of local library “friends” groups are always welcome. To learn more about the proposed cuts to Santa Rosa City Schools libraries, the school board meetings are open to all.

“You close the school libraries, and then sometimes the city library is the fallback,” Williams says. “The two are different animals, but if you close one door and then you close another, then all of our population—whether rich or poor—doesn’t have access.

“We want to keep it open for everyone.”