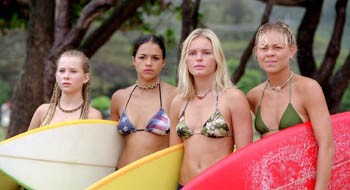 I guess I haven’t seen that many teen movies lately,” admits Joelle Fraser, underscoring her confession with the kind of contagious laugh that makes everyone within earshot burst a into smile. Fraser–author of the instantly notorious, critically lauded memoir The Territory of Men–has just experienced her first “teen movie” in several years (she’s 35) and, it turns out, was quite impressed. “If all teen movies are like Blue Crush,” she says, “then–wow!–I’ve been missing out.”

Note to Joelle Fraser: most teen movies are nothing like Blue Crush–though that’s not to say that the film’s a masterpiece. Blue Crush is a little sloppy around the edges, but nevertheless it was full of pleasant surprises for first-time author Fraser, in part because it bore so many eerie similarities to her own life story, as described in heartbreakingly poetic detail in her sensational new book.

Blue Crush, based on a magazine article about Hawaiian surfer girls, follows the gritty adventures of three hard-bodied surfer girls in modern-day Hawaii, primarily Anne Marie (Kate Bosworth), who dreams of competing in a major surfing competition but has a lot of issues to overcome: men, mothers, fear of drowning–that kind of thing.

To anyone who’s read Fraser’s book, it will come as no surprise that what slammed her the hardest about Blue Crush was not the film’s extraordinary surfing scenes, the all-night partying, or the icky hotel schtick. It was Anne Marie’s painful struggle to avoid following in the footsteps of her mother, in regards to living for men and compulsively giving up her own dreams.

“That stuff really hit me,” Fraser says. “I could so identify with that young girl, wanting to shake that off, that whole ‘like mother, like daughter’ expectation that people have. It’s so hard, wanting to say ‘No. That’s my mother. That’s not me,’ and at the same time having to face the fact that, yeah, who my mother is and what she’s done is a big part of me.”

In the movie, Anne Marie’s friends are more than aware of her self-destructive nature, and when she begins to skip surfing practice to go romping with a vacationing quarterback, they are quick to tell her she’s messing up.

“To pursue a dream,” she goes on, “you have to become single-minded and somewhat obsessed. And when you have a guy, you spend all your time thinking about him instead of your dream. It can change the direction of your life. All of a sudden, instead of having a hundred doors open, you are with a guy–and there are only these 10 doors available.”

I ask Fraser if she thinks this is a positive movie for teen girls to see.

“Oh, yeah. This is a movie for any girl who wants to be inspired, and for any guy who is willing to start seeing girls in a different light. Girls will be so inspired by this story. And then the other thing was watching a girl kick ass like that. I think it’s good for guys to see that. I really think a movie like this, if it’s seen by enough young people, can change the way men and women relate. It could actually increase the level of respect there is for women, both in the way men see women and the way women see themselves.