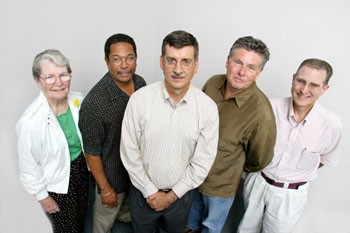 War of the Wages

Matthew Smith (not his real name) has a wife, three children, and two jobs. He gets up at 4am five days a week, and his day is over when he drops into bed at 11pm.

The only wage earner in his household, Smith maintains this work schedule because it’s the only way he knows to keep his family out of poverty. Of his two jobs, he prefers the one that pays him $14 an hour. His greatest fear is that these precious hours will be reduced: it’s a tough economy, and the company has recently made cutbacks.

Smith receives no sick leave or vacation time. When he doesn’t work, he doesn’t get paid.

Smith’s other job, which pays $10 an hour with minimal benefits, is at a company that has a contract with the city of Santa Rosa. A living wage ordinance in the works for Santa Rosa would raise Smith’s wage by over $2 to $4 an hour, depending on whether benefits are included.

Though Smith can only afford a two-bedroom apartment, all in all this family of five is lucky to have a roof over their heads. According to the California Budget Project, more California workers earned poverty-level wages in 2000 than in 1989. Also in 2000, 26 percent of the state’s workers earned wages that were too low to bring a family of four above the poverty level.

An added pressure on families attempting to rise out of poverty is the spiraling cost of housing. The National Association of Home Builders reports that in 2001 families earning $61,800 could afford only 15.3 percent of the homes available in Santa Rosa. That’s way out of reach for Smith, whose annual gross income is about $42,000.

Finding affordable rentals is equally challenging. According to the Living Wage Coalition of Sonoma County, in 2001 the average rent of $1,020 for a two-bedroom, one-bath apartment required a wage of nearly $20 an hour.

San Anselmo is expected to pass an ordinance in September or October. Sometime after that, the Living Wage Coalition of Sonoma County will introduce a revised version of the ordinance that the Santa Rosa City Council rejected last year.

If approved in its current form, the ordinance will ensure that eligible workers are paid $12.25 an hour with benefits or $14 an hour without benefits. As an employee of a city contractor, Smith would receive the raise.

The proposal also applies to employees of companies that receive subsidies from, and/or have lease agreements with, the city. Businesses with fewer than six employees are exempt, as are seasonal city youth workers and student interns. Nonprofits covered by the ordinance wouldn’t have to comply with its wage and benefit standards until three years after implementation.

Lynn Hollander, a member of the Living Wage Coalition, explains why she supports a living wage. “The city of Santa Rosa–the people of Santa Rosa–should not be subsidizing poverty, which is what happens when contracts are awarded to firms that pay very low wages to their workers. People should not have to live that way.”

The Reverend Tom Kimball, minister of First United Methodist Church and a member of the Interfaith Committee on the Living Wage, has a similar view. “A fair day’s work deserves a fair day’s pay. No one who works for a living should have to struggle in poverty. Our city should [help] poor people rise above that.”

Though he tentatively supports a living wage, Santa Rosa City Councilman Steve Rabinowitsch has reservations about the proposed ordinance. “It has certain impacts to the city. There are some budget issues we need to make sure that we address. There are also potential impacts to local businesses. We need to study it and come up with a wage level that makes sense for Santa Rosa.

“We’ll be concerned about contractors, as [the ordinance] could impact the price of services. The city may have to spend more money for services, and we’re under a lot of budget pressure. . . . There will be a lot of discussion about it [and about] what level it should be.”

Keith Woods, chief executive officer of North Coast Builders Exchange in Santa Rosa, opposes local living wage ordinances. “We believe the city should not get into determining what wages should be for private employers,” he says. “The last [version of the living wage ordinance], in our mind, was so badly flawed and had so many unanswered questions that we think the city did the right thing in not setting up a task force to study it.”

“Let’s say that a small business in Santa Rosa wants to bid on a significant project,” Hauser continues, “but their pay scale is below what the ordinance would mandate. How would they manage that? Would they create two wage structures, one for city projects and one for other projects? And what if some high roller comes in and can easily afford [to pay more]? That’s all dependent on the wages and fringe benefits the ordinance calls fair. The dirt’s in the detail.”

Rabinowitsch stresses that a living wage ordinance won’t solve all the problems that face the working poor. “Wages compared to the cost of living are low, particularly in our area with housing prices being so high. . . . I’m supportive of the concept of living wage as a tool to help address the problem. At the same time, it’s only one piece. The minimum wage is too low. It’s inadequate for people to live on, and even a living wage only affects certain groups of people.

“Many other things need to occur. There’s a bigger societal problem of inequality, and unequal distribution of income.”

Fairfax Town Councilman Frank Egger also believes that the minimum wage is too low. “The federal and state governments are in denial about the real cost of living–in San Francisco, California, Washington, D.C., all over,” he says. “We have a state minimum wage of $6.75 an hour, and it should be $10. You can’t [even] find a teenager to help you with your yard work for $6.75! Defense contractors make billions of dollars, CEOs make millions of dollars–and elected officials are worried about the impact of raising the minimum wage. The reason they’re concerned, I guess, is that the big campaign contributors are the CEOs that pay these low wages.”

Egger is the author of the Fairfax Living Wage ordinance, which provides the highest living wage in the nation: $13 an hour with employer-paid benefits and $14.75 without benefits.

Stephen Harper is chairman and founder of the Faith-Based Coalition, a group that supports low income and special needs housing in Sonoma County. He describes the minimum wage as a “poverty” wage. “The [federal] government has issued guidelines as to at what point the poverty line is, and the [federal] minimum wage falls below that line,” he says. “I believe that businesses have a moral and ethical mandate to pay people a wage that can support them within their community, and that would be a living wage.”

In fact, the government’s method for setting the poverty line hasn’t changed since the mid 1960s. Many analysts and government programs, including Food Stamps and Section 8 Housing Subsidies, define the actual poverty line as 100 percent to 250 percent above the federal poverty line.

Until state legislators and Congress increase their respective minimum wages, it appears that local jurisdictions will continue to pass living wage ordinances.

But what about Santa Rosa? Marty Bennett, co-chair of the Living Wage Coalition, says, “We’re currently talking to the Santa Rosa City Council to see if there are four votes [for the living wage ordinance], and haven’t yet decided when to introduce it. In early September, we’ll distribute [the revised ordinance] to all city council members and candidates. We’ll lobby each one and attempt to make the living wage a campaign issue.”

Also at the forum, the coalition will release a UC Berkeley report on a study of the impacts of a living wage law on the city of Santa Rosa and its contractors. Based on the experiences of other cities that have passed ordinances, researchers found that at least half of the anticipated costs of a living wage ordinance would be offset by a decrease in employee turnover and increases in training and productivity.

Though the living wage ordinance wouldn’t eliminate the need for Matthew Smith to hold two jobs, its passing would make his life easier. “I’ll be able to cut back on my hours,” he says. “I’ll be able to get more sleep and to spend some time with my wife and children.”