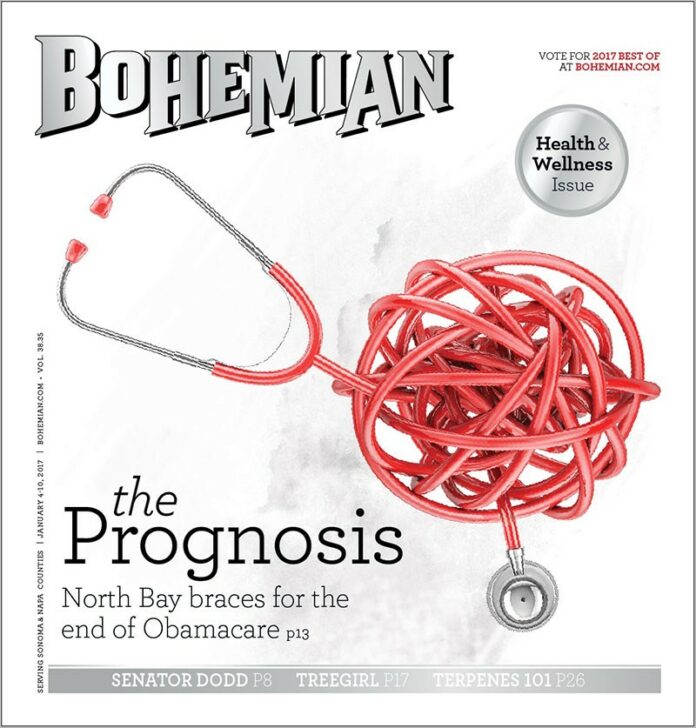 Will the cure for the Affordable Care Act make matters worse?

‘This bill is being shoved down the throats of the American public” was a well-traveled Republican refrain around the Affordable Care Act as it wended its way through the legislative process back in 2009, and a favorite rhetorical talking point of former House Speaker John Boehner.

Now the Republican majority promises to repeal Obamacare as the first order of business for the 115th Congress. And it appears that they aren’t proposing any sort of replacement for it, a move that will likely cause pain in California and across the country.

The Republican plan is to “repeal and delay,” but nobody knows if a GOP omnibus health bill is in the offing that would replace some of the popular aspects of Obamacare, which include a ban on denying coverage based on pre-existing conditions and a ban on annual caps on coverage.

“What we don’t know yet is, when will it take effect?” says U.S. Rep. Jared Huffman. “Will there be a two-year cliff or a four-year cliff?”

The GOP plan also includes a promise of extortion if Democrats don’t go along. House majority leader Kevin McCarthy says that if Democrats don’t participate in post-Obamacare, then they’re responsible for whatever consequences ensue.

The Sonoma County chapter of Organizing for Action, the post-Obama, activist-outreach organization, has been busy protesting McCarthy’s office and that of fellow California GOP Rep. Darrell Issa, neither of whom support the idea of healthcare as a basic human right, but who represent districts with significant buy-in to the ACA.

“When they know that their district is going to push back on them, it might give them pause,” says Sonoma-based OFA organizer Linda Hemenway. “We’re trying to educate the public about what’s going on, and our basic premise is that you can’t repeal it without a replacement that has been presented to Congress and explained to the American public, instead of this fantasy replacement that the American public supposedly supports. We’re on the defensive, we’re under attack and we’re going to say, ‘Do you really want these rights and benefits taken away from you?’”

Obamacare has generally been a benefit to California and to the North Bay. The state embraced the Medicaid expansion that went along with the healthcare overhaul, and was one of the first states out of the gate to set up a state-run exchange, Covered California. Thanks to Obamacare, the state halved its uninsured population, and the reforms have trickled down to hospitals, which are seeing fewer people in their emergency rooms—amid a greater, holistic appreciation for the benefits of preventative care. The Sutter Health system has experienced big savings in its hospitals located throughout California, including one in Sonoma County. The company reported that it spent $52 million in uncompensated “charity care” in 2015, compared to $91 million in 2014.

The North Bay has embraced the Obamacare benefits and mandates, and stands to lose if the ACA is repealed. The Sonoma County Economic Development Board published a report in 2016 that highlighted benefits brought to Sonoma County citizens under the law, especially given the county’s aging population and composition of its labor force. Many lower-income immigrants qualified for the Medi-Cal expansion.

“Healthcare is contributing to the economy’s vitality,” the report noted.

The potential post-ACA risk for a place like California, which enthusiastically embraced Obamacare and a Medicaid expansion, is that it has the most to lose under a Republican repeal-and-delay plan.

The Urban Institute estimates that up to 30 million Americans will lose insurance if the Affordable Care Act is repealed, and even if the Republican Party decides that the politics are against them and starts cherry-picking popular aspects of the law, it’s unclear how they’ll keep the ban on denying coverage based on pre-existing conditions without, as Huffman says, “wading into risk pools and market forces.”

Previous GOP repeal bills haven’t addressed those issues. The Republican position on Obamacare has also helped to drive down enthusiasm among younger people to sign up, a key piece of the bill’s success in driving down the cost curve over time.

The previous GOP push to undo Obamacare has been pretty simple: repeal it and send the bill to Obama who dutifully vetoes it. Now that the GOP has total power to eliminate it without a replacement, there are signs that there are limits to “shove it down your throat” politics. Even as the Republicans vow to disable the law, Americans continue to flock to the ACA-created health exchanges to buy an insurance product suitable to their budget. “Will [Republicans] be smarter,” says Huffman, “or just set up some distant cliff and count on everyone to come together before the cliff takes effect? We’ll see.”

Whatever happens, Huffman says, congressional Dems will try to hold the line. “Obviously, we will fight that,” he says. “We will focus our efforts on the effects it will have on Medicaid and on Medicare, because the ACA actually stabilizes [Medicare] and provides funding to seniors.”

The latest plan from House Speaker Paul Ryan is to reform Medicare, a legacy of the LBJ-era Great Society programs.

One of the strangest things about Obamacare, as it has been received by Americans, is that, while there is wide support for many of its benefits, the law itself remains unpopular, and one of the reasons has to do with a basic question of nomenclature. A 2014 CNBC poll found that while 46 percent of Americans were opposed to “Obamacare,” only 37 percent opposed the Affordable Care Act. Part of the explanation for this disconnect is the rhetorical violence that has met the bill since its inception in 2009. Democrats have not adequately addressed the rhetorical divide.

And yet nobody seems to remember that, as part of his sales pitch for the bill, President Obama put the ACA framework into the hands of pragmatic Maine Republican Susan Collins and said, “You write it.”

But Collins joined every Republican in voting against the bill, even as liberals screamed betrayal that Obama hadn’t implemented a single-payer system that would have destroyed the employer-based healthcare system. “It was a step forward, even if it wasn’t a big enough step forward,” Hemenway says.

And so now it’s time for a big step backward, and the latest news from Collins is she isn’t so sure it’s such a great idea to dismantle the ACA.

The other infamous line from the ACA’s inception was minority leader Nancy Pelosi’s observation that Congress had to pass the bill to know what was in it. That comment takes on a new urgency in light of the pledge to repeal and maybe replace some of it.

The Affordable Care Act is more than 2,000 pages long and part of the reason for that is lawmakers from around the country were able to include health reforms targeted at the particulars of their district, even when they opposed the bill as a whole. As they did with the first Obama economic stimulus package, Republicans rejected the bill, but not before making sure their constituents were appeased in some way.

That fact leapt into the media last week in a well-traveled news story on CNN from the heart of coal country, where residents who had, in the main, voted for Donald Trump now wondered about those parts of Obamacare that dealt with the effects of black lung disease on coal workers and their families.

A standard Republican talking point on the ACA at the time was that it was too much, too fast and that a better legislative strategy would have been—and will be—to pass each of its component parts as a separate bill.

If the Republicans make good on their plan to repeal and delay replacement, that will give lawmakers like the Kentucky senator Mitch McConnell time to write up a targeted bill for his constituents.

In California, repeal means that the state would have to pick up the slack and account for a Medicaid expansion that has helped the state halve its uninsured population from
6.8 million pre-ACA to under 3 million now. There’s been buy-in across the state and the region. Marin County recently reported that about one-fifth of its 250,000 residents have in some way been touched by Obamacare, either through the Medi-Cal expansion or through Covered California.

Napa State Sen. Bill Dodd says Sacramento Democrats are ready to take up the fight in the likely event of repeal-and-delay.

“I’m an ardent supporter of Covered California,” he says. “The idea of people not getting insurance at all, forcing families into poverty or, worse yet, forcing them to suffer, is not my idea of a prudent 2016 or 2017 health policy.”

Dodd is a former Republican who readily admits that while the ACA is not perfect, the needed reform is not repeal. “While I’d be the first to admit that the cost of Obamacare is not what we’d all have liked to have seen the markets move to, they are what they are and I’m hoping that the next presidential administration will be a little more pragmatic and look at Obamacare through a lens of not political but practical,” Dodd says as he promises a forceful pushback to the Republican’s push to repeal and delay the ACA.

“You are going to see the Democratic Party in the Legislature defending the people who are on Obamacare,” he adds. “The Republicans could have gotten involved in this system instead of trying to kill it.”