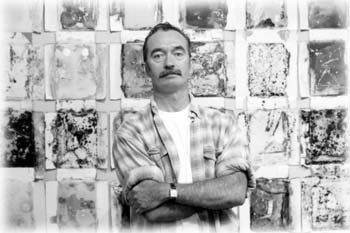 People tell us things–can you blame them?

Ice Cream, You Scream: “Those are molded ice cream lids,” laughs installation artist Elmo May, pointing to the light green (pistachio), sweet brown (chocolate), and pale pink (strawberry) rectangles hung with a repugnant beauty on the back wall of the California Museum of Art. “I work in a coffee shop and just kept pulling them off, and there they were,” he chuckles.

Doing little more than fixing the goo with a sealant and putting some of the lids in the dark to mold, May is among the artists exhibiting at the CMA’s “Registered” exhibit, one of three new shows at the museum. May’s installations will share the space with SRJC instructor Alan Azhederian’s quilted wood marvels, the work of painter Alice West, and the drawings of Susie Philips. Mark Gordon’s moody ceramic eggs and some ton of lava rock will occupy the main gallery (“Installed”), while found-object artist Zoltan Vasvary’s tall, lacy weldings made from railroad ties (“Nailed”) will fill the foyer.

But right now there’s a bunch of eclectic junk on the floor, track lighting sitting dejectedly in a box, and lots of free pastries laid out on a folding table: a child’s idea of the perfect museum experience. This might not disturb May.

“A lot of this is about childhood,” he says, standing near his second installation, one composed almost entirely of silvered milk cartons, “about how we compartmentalize our thoughts from childhood, and how we try to hold children up to standards that we can’t keep up with ourselves.”

Spare, dark, and clean, May’s installations have a surprising lyricism wrought from the change in context this former window dresser has wrung from his starting points. But he’s not looking to knock anyone out with his ego. “I’m sure for a lot of people it’s just going to be a bunch of moldy ice cream lids,” he shrugs with a smile.

Down to the Ground

Two years ago the Gravity Art Festival, an adjunct event to April’s Apple Blossom do, was initiated. Stipulating that all works must examine the earth’s pull on matter, this event has before featured art that co-organizer Paul Stychno slyly reports looks as though it’s been run over by a tank.

A thinking man, Stychno devised a twist: he’s got a tank–a 25-ton Russian T-34 5-person tank, to be exact–and is inviting artists to exhibit in next year’s Gravity Art show with works that either have a certain hangdog appeal before being run over or will have a certain je ne sais quoi after squashing. Cuz squashing is exactly what the works will endure. Scarcely able to contain his glee over the phone, Stychno, along with fellow organizers, is compiling a jury of 12 peers (“a bunch of people who will walk around and drink beer”), and calls to artists will go out through the Sebastopol Center for the Arts early next year. We’ll keep our ears flat to the ground on this one. 829-4797.

The Spreckels Performing Arts Center in Rohnert Park has announced its new season line-up, and among such regular attractions as the Festival of the Harps (Nov. 8), Spreckels has added a new wrinkle. Teaming up with the producers of the Russian River Jazz and Blues festivals, Spreckels introduces indoor jazz, with Bobby Hutcherson and his quartet enlivening the fall (Nov. 1), Charlie Byrd and his trio swinging through in the winter (Feb. 28), and the Cedar Walton Trio jamming it out in the spring (April 18).

The resident Pacific Alliance Stage Company begins the season with Lend Me a Tenor (Nov. 2-19), a mistaken-identity comedy whose laughter stems from backstage antics and the theatrical device of one door opening as another closes, thus confounding all but the audience. PASCO reprises the popular 1940s Radio Hour for its holiday show (Nov. 28-Dec. 7), and mounts the stage version of the popular Danny DeVito vehicle Other People’s Money (Feb 12-March 3) in its smaller theater in the spring, finishing the season with the pioneer drama Quilters (April 23-May 10).

The Smuin Ballets/SF return to Spreckels with their holiday two-act, consisting of “The Classical Christmas” and “The Cool Christmas” (Dec. 13-14). “Classical” plays it straight, with dancers swirling to Bach, traditional Hanukkah music, and Renaissance madrigals. “Cool” employs such artists as Louis Armstrong sending the lords a-leapin’, as well as music by lesser-known Cajun and African artists. For traditionalists, resident Ballet Califia stages its annual Nutcracker (Dec. 19-21), choreographed by company director David McNaughton. 584-1700.