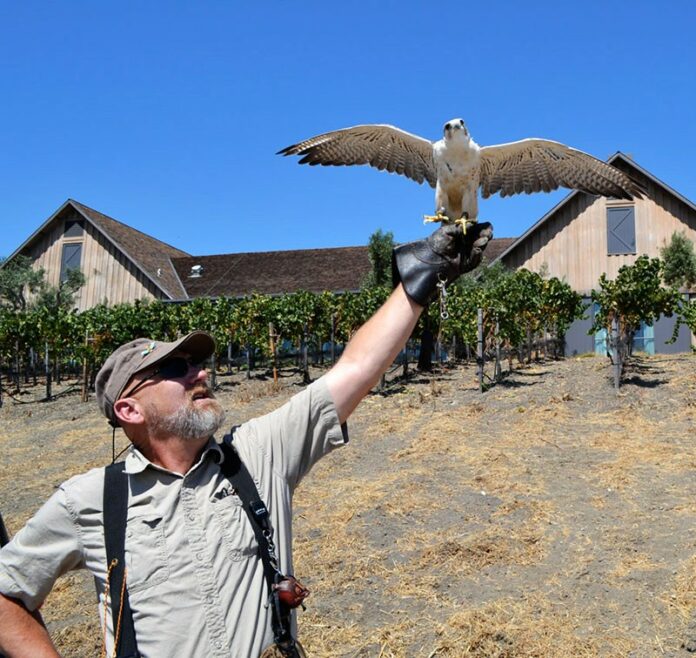 Jim Tigan’s SUV is an aviary on wheels. When he opens the cargo door, an enormous Eurasian eagle-owl swivels its head to stare back with gleaming orange eyes. Perched comfortably in their respective cubicles, two falcons appear unfazed—they’re wearing little leather hoods that block their vision. When Tigan uncovers Beebe, an 8-year-old saker falcon, she hardly blinks before scanning her surroundings. After he gives the signal, she is nearly out of sight within seconds, taking an inventory of the area’s thermals for future reference and, most importantly, striking fear in the tiny hearts of starlings.

Marauding birds can inflict heavy damage on vineyards, especially flocking birds like starlings, and especially in the Carneros area. Deterrents such as shiny tape and gas cannons may have limited effect and it’s labor-intensive to apply miles of nets. For the past two years, Ram’s Gate has retained the bird abatement services of Tigan’s Tactical Avian Predators. As the owl waits in the car for his moment in Pebble Beach (seagulls are his specialty) the certified master falconer and his assistant, Bo, spend the day running after their birds. Tagged with radio transmitters, the falcons are free to roam, but they do their job, whatever it is: Beebe recently did a stint on a reality TV show, delivering a wedding ring.

Tigan gets Beebe’s attention by whistling, and brings her back in by swinging a tasseled lure—like a dog chew toy—over his head. In a flash, the falcon nails the lure and gets her reward—bits of restaurant-grade quail meat. Tigan’s falcons generally don’t attack the starlings; they only need to haze the birds and inspire them to move on to someone else’s vineyard.

It’s an elegant way to protect grapes, if not the most inexpensive. But plastic nets eventually become waste, and they’re a hazard to native songbirds and raptors, Tigan says. Part of the upside of Tigan’s falconry service is that he brings his birds into the winery at the end of the day, where they’re a big hit with visitors.

There’s still plenty to peck on at Ram’s Gate, but they’ve changed up the program since we stopped by in 2011. The à la carte small plate menu didn’t work out—not that it wasn’t popular. Now, the capacious, upscale barn-styled joint offers a tray of small bites with guided wine pairings, a gab-with-the-chef rendezvous, as well as tastings at the bar. Top pick: 2012 Ulises Valdez Diablo Vineyard Grenache. When the dust settles on spicy-earthy notes, sweet cherry licorice is revealed, and the fruit lingers under top-palate dryness.