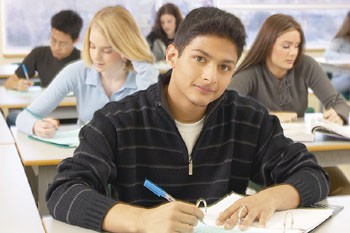 Progress Report: Like all students, Latinos do better when parents are able to easily communicate with teachers.

Latino parents pressing the Cloverdale Unified School District for a bilingual secretary at the district’s middle school have ignited a controversy tinged with racism in this small, northern Sonoma County community.

The conflagration was sparked after members of Washington School’s English Learner Advisory Council (ELAC), a group of Spanish-speaking parents led by president Marina Trevizo, requested a bilingual secretary at the monthly school-board meeting last February. They were answered by a series of articles and letters to the editor in the local newspaper, the Cloverdale Reveille, that left some Latinos fuming.

Such tensions illustrate the needs of a Latino community that is growing statewide even as education budgets come under increasing pressure. More than one-third of the 632 students at Washington School are Latino. Meanwhile, in a budget cycle that includes last year, this year and next year, the district will see nearly $1 million lopped off its annual $10 million budget, according to Washington School principal Tonya Giusso.

“We can’t hire a bilingual secretary, because there’s a hiring freeze, and we can’t just cut a secretary to put a new bilingual secretary in,” Giusso explains. “If we could, we would, because obviously there’s a need for one.”After the ELAC request at the school board meeting in February, Cloverdale Unified School District superintendent Claudia Rosatti responded with an article that was published on the front page of the Cloverdale Reveille on March 2.

In the article–which was also subsequently mailed to parents in letter form–Rosatti defended the district’s efforts in providing English as a second language (ESL) services to both adults and students. The issue at hand–whether the district should provide a bilingual secretary at Washington School–was the fourth item on a lengthy list. After pointing out that last year the district had responded to the ELAC’s request by hiring a bilingual person to answer calls at Washington School for one hour at the beginning and the end of each day, Rosatti finally cut to the chase.

“Beyond the above-mentioned position, the District has explored whether it was legally obligated to hire a full time bilingual secretary, or other clerical position,” Rosatti wrote. “The answer from all sources was that there was no legal obligation to do so.”

The response didn’t exactly go over well with Spanish-speaking parents, reports Oscar Guajardo, a counselor at the Cloverdale Boys and Girls Club who has worked closely with the ELAC.

“It’s not just about legality,” he insists. “School is a business, and if you want your child to succeed, you want somebody who can communicate with them. This goes beyond the bilingual issue; this is about respect and dignity.” And, he adds, it is not a new issue.

“Parents have been telling the school again and again. Cloverdale is like the Cinderella stepsister of Sonoma County.”

Guajardo also says Rosatti made it sound as if the district itself was paying for all of the ESL programs, when in fact most of them are federally funded, and many are endangered by future cuts in funding. In fact, Guajardo formerly worked as bilingual counselor at the Jefferson grade school in Cloverdale and one day a week at Washington until his services were cut due to lack of available funds last year.

Adding insult to the minor injury caused by Rosatti’s article was an editorial in the same issue by Reveille editor Bonny Hanchett, which stated that Hispanics have “overlooked the many accommodations that the Cloverdale Unified School District is providing for parents” and that “it would be more productive to encourage such parents to dedicate themselves to the task of learning English.”

It was left up to letter writer Gari Jones to throw gasoline on the flames in the next issue of the Reveille on March 9.

“Marina Treviso has pushed her exclusively Hispanic agenda too far,” Jones wrote. “She won’t learn English and wants the rest of us to pay for it? In light of severe budget restraints and cuts, if the threats Treviso made are a joke and if our Hispanic community wants to be taken more seriously, they should challenge this woman with her antagonistic views.” Jones’ rant reached a fiery conclusion: “As hard as we work and as much as we give, we ask for nothing. Marina Treviso should ask for even less.”

“We’re pretty open with our letters to the editor,” Hanchett replied when asked about Jones’ letter, which caused a firestorm in Cloverdale’s Latino community. That included Latino students at Washington School, a number of whom wrote their own letters to the editor in response. Yet when those letters were delivered to the Reveille offices, Hanchett refused to print them, according to multiple sources contacted by the Bohemian.

“We are studying the Constitution in school this week,” one eighth-grader wrote. “This week, in life, I learned about racism.”