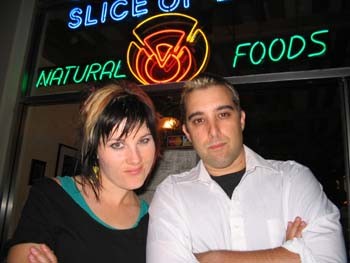 It’s 2:35am and I have just spent the evening trying to convert the singers of a punk band into hippies.

It was useless, of course, but I had to give it a shot. It all started with a song titled “D.R.H.” on Ashtray’s new album, White Sugar Is The Devil (Pandacide). I quote: “We’re friends with the animals, we’re friends with the trees. / We are the flower children, we even love the bees. / We follow Phish around and we followed the Dead. / We’re Dirty Rotten Hippies / We need a bullet in the head!”

OK, even if you think hippies are misguided and annoying, and even if you hate jam bands and patchouli, and even if you really wish that hippies could get their act together enough to be a cultural force instead of a shadowy caricature of a bygone era, you have to admit that Ashtray might be going a little bit overboard here.

So I decide to get to the bottom of things and throw Ashtray into the fray. I’ll drag them around to some hippie hangouts and see how they fare–who knows, maybe even get them to see eye-to-eye with hippies a little bit.

We start with Whole Foods Market in Sebastopol, as gruff singer Dave Wiseman portends, “to face our worst fears and nightmares.” The evening’s first challenge is to find, among the yoga pants and braided beards, some sort of hippie product that the singers of Ashtray can actually condone. To incite their support, they’re each given $5 to spend–not exactly a big budget for Whole Foods, but Ashtray comes through.

Fellow vocalist Sarah-Jane Andrew is overwhelmed in the homeopathic aisle by $10 sponges and $18 lubricant, but settles on some Persimmon Rose Geranium Deodorant. “But I don’t think it’s going to be very effective,” she complains. “It tells you to clean your armpits before you put it on.”

Wiseman heads to the meat department before embarking on a vain search for Robitussin. Ultimately he decides on the most sensible hippie-punk compromise: a bottle of hemp beer (“Alcohol is the great equalizer”). He still has $1.50 left to spend, and incredibly, we convince him to get a shot of wheatgrass juice.

Wiseman slams down the vile drink, winces in pain, goes next door and throws up.Things are not getting off to a very good start, and it only gets worse. See, among Ashtray’s top targets for abuse are vegetarians and vegans (see “Vegan Song” from White Sugar), and alas, our dinner tonight is at a natural foods restaurant which boasts an animal-product-free menu.

“Yeah, this place is fucked up,” adds Andrew. “Look at this: ‘Zenburger. It’s zensational!'”

Nearby, two women discuss the upcoming Harmony Festival and life in the Colorado Rockies between cell phone conversations. A guy in a ponytail and a pair of Seven jeans walks by and smiles at Andrew. New Age piano music drips from the speakers.

When our food arrives, the singers for Ashtray dig in to a pair of vegetarian burgers, complete with fake bacon and soy cheese, and I can’t believe my eyes.The reviews, however, are not good. “These taste like fries I found in the trash,” says Andrew of her fat-free side order. She attempts to explain the weird yellow substance accompanying her Nutburger, while Wiseman, still a little rocky from the wheatgrass, valiantly stomachs his entire sandwich.

We walk around town for a while and peek into store windows, eliciting more dismay. “Oh God, yoga, chakra, shells, a book about fairies?” Wiseman groans. There’s books with subtitles like Chart Your Own Course Of Healing And Spiritual Awakening and Concentrated Wisdom For Juicy Women.

“I don’t know, apparently there’s a goddess inside of me,” says Andrew, “and I’m supposed to get in touch with it.”

One of Ashtray’s features as a band is the lost art of Not Taking Yourself So Seriously, and Andrew and Wiseman are having such a good time wandering the streets of Sebastopol, deconstructing all the terrible, billowy outfits, that it seems their famous hippie- and vegan-hating might be a front.

I decide to press my luck. We hop in the car and drive back to Santa Rosa, and I press “play” on the carefully planned surprise cassette in the car stereo: the Grateful Dead’s 1968 album Anthem of the Sun. “No!” Wiseman cries. “The worst of all! Hippie music!”

“How do you dance to this?” asks Andrew. “I feel like I should be swimming underwater, that’s how this music makes me feel.”

But is there any way, I ask, that you could see yourself getting into the groove?

“The groove of this?!” Wiseman shouts. “Hell no! Have you heard our album?”After endless interrogation about hippies, the dam needs to crack at some point, and it does–right after a rant about the Doors. It’s Wiseman who breaks first, heaping praise on Ken Kesey and his Merry Pranksters who were, in his words, “the true, original, real hippies. They were actually a bunch of cool, rebellious people who took everything to the next level.”

Subsequently, Andrew starts raving about Mario Savio, the late founder of the free speech movement at UC Berkeley. I think we’ve almost reached an accord, and when we crack open some Pabst Blue Ribbon in the parking lot outside a reggae show, it feels like all is well.

But the truce doesn’t last long. As soon as we start watching the reggae band inside, Andrew and Wiseman are finally and completely steamrolled. They stand stunned, arms folded, only sporadically bemused. There may be just so much the singers of a punk band can take, and this reggae band, right here, is the saturation point.

It’s time to call it a night. The band is actually pretty tight, but Ashtray is having none of it. What’s more, there aren’t hardly any actual hippies here to make fun of, and most importantly, there’s more PBR out in the car.