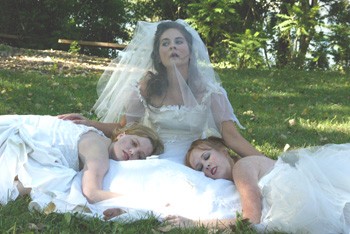 In Chekhov’s plays, it was the gun. If you saw a firearm lurking on the mantle in Act I, you knew it would go off by Act III. In Big Love, now at Actors Theatre, it’s the bubble bath–a big tub of soapy water sitting ominously in the middle of the stage. But here, we don’t wait long for the inevitable.

It takes a mere 30 seconds for Lydia (played by Sigrid Sutter) to burst through the door, strip off a wedding dress, and plunge into the waiting water. The punch line? It’s not her bath, it’s not her house, and it’s definitely not the hotel room she thought it was, as she learns when a resident of the house turns up to determine what a naked stranger is doing in the family bathtub.

As for the audience, it has just learned much of what it needs to know. For better or worse, Big Love was not written by the sort of playwright who worries about such questions as “Why would an apparently intelligent young woman mistake a private Italian villa for a hotel?” The song and dance numbers that follow confirm that gritty realism of the usual sort is not on offer here.

It’s easy to say what Big Love is not. Describing what it actually is amounts to a much tougher task. Playwright Charles Mee has taken one of the oldest surviving dramas in human history–Aeschylus’ Suppliants–and used it as a foundation for a surreal, disjointed, and disturbing exploration of the modern battle of the sexes.

The plot of Big Love isn’t too different from its source. After her splashy entrance, Lydia reveals that she is one of 50 sisters fleeing from the mother of all arranged marriages. The women–the audience only meets Lydia, Thyona (Melissa Thompson), and Olympia (Kelley Rose Anderson)–are supposed to wed 50 cousins, who are now in frantic pursuit of the wayward maidens. The sisters appeal to Piero (Joe Winkler), the villa’s owner, for protection. Piero dithers, the cousins arrive in force, and confusion and conflict ensue.

The cast, composed mainly of young actors, does a creditable job of bringing these characters to life. The three sisters are excellent, with Thompson standing out as the fierce Thyona, who promises to shed blood rather than surrender to her would-be husband. “This game isn’t over until someone lies on the ground with the flesh pulled off their bones,” she growls.

Patrick James Alparone is both compelling and appalling as Constantine, the militant leader of the suitors, who explains why he is unconcerned that his bride-to-be is not interested in marriage. “People are taken against their will every day,” he says. “Time itself is an act of rape.”

Big Love‘s big problem is how emotionally incoherent it proves to be. The playwright clearly wants his audience to think about the complicated compromises people must make to live in a world they never made. But a play about human relationships that revolves around forced marriage and rape makes nuanced feelings seem inane. We should probably be appalled when Thyona, facing imminent violation, proclaims, “These men should be snuffed out.” Instead, it’s hard not to want to reach up to the mantle and hand her the gun.