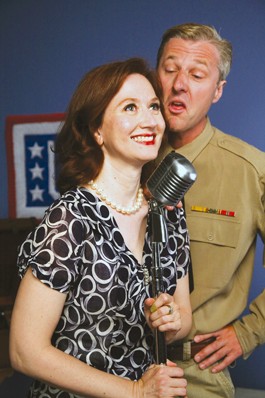 Beloved Shakespeare comedy gets 'In the Mood' at Sixth Street

Much Ado About Nothing is not only one of Shakespeare’s funniest, best and most beloved comedies, but, with some of the Bard’s sharpest and wittiest repartee, it is one of Shakespeare’s most accessible plays for modern audiences. So it’s a pleasure to report that the Sixth Street Playhouse’s 1940s version of Much Ado, In the Mood, retains most of the original Elizabethan text.

The original inspiration to marry Much Ado with songs like “In the Mood” and “Apple Blossom Time” belongs to the late Patrick Watkins, who staged a similar version in 1997 at the University of Tennessee in Knoxville. That production, which opened just before Watkins’ death of AIDS, used John Fitzgerald’s adaptation of Shakespeare’s original. Since that first production 12 years ago, Fitzgerald has dreamed of resurrecting Watkins’ USO/Much Ado musical hybrid, and now, under the direction of John Craven, an additionally reworked version has come to Sonoma County.

At a captured Italian villa during WW II, a USO camp has been established by American entertainer Madame Leonora (written as a man in Shakespeare’s original, here played beautifully by Elly Lichenstein), whose daughter, Hero (a delightful Marjorie Rose Taylor), is among the women of the troupe. When a band of soldiers arrive for a few weeks of R&R, a series of romantic entanglements are set in motion. Claudio (Tyler Costin) is the young second-in-command to seasoned soldier Don Pedro (Paul Huberty), whose jealous half-brother Don John (a glowering Anthony Abate) seeks to derail Claudio’s spontaneous betrothal to Hero.

Meanwhile, another solider, the confirmed bachelor Benedick (Tim Kniffin, outstanding and frequently hilarious) engages in spirited battle-of-the-sexes verbal combat with Hero’s cousin Beatrice (Danielle Cain, all ice and fire), who swore off love long ago. Some of the play’s most memorable dialogue comes from the rich put-downs and taunting launched by these two warriors of wit.

Don Pedro’s friendly conspiracy to trick Benedick and Beatrice into falling for each other sets up yet another series of misunderstandings and confusions, all of which are ultimately resolved in Shakespeare’s traditional, last-minute, over-the-top collision of coincidence and forgiveness. A lot of the plotting is outrageous enough when left in Shakespeare’s original setting, but when moved to the 1940s, it takes on an aura of dreamlike surrealism and farce that only emphasizes the fun.

The songs, when they occur, seem less easily integrated than one expects from a musical, but the tunes are well chosen and cleverly presented (there’s no band, only a large vintage phonograph player). The musical highlights are Lichenstein’s early performance of “More Than You Know,” Taylor’s scaldingly sweet “Someone to Watch Over Me” and Kniffin’s show-stopping rendition of “Come Rain or Come Shine.”

The cast is almost uniformly fine, with some excellent work done by the supporting players, notably Jeff Coté as Don John’s ruffian accomplice Borachio and Chris Murphy as the loopy constable Dogberry, who uses words the way chefs make omelettes. Murphy wisely slows down Dogberry’s onslaught of words so we can hear every tortured twist of baffled verbiage.

The production is not without flaws. As often happens when Shakespeare’s settings are altered, the translation to modern times is occasionally jarring; the notion of someone literally dying of heartbreak is a bit much even for the 1940s. There was also a perceptible tentativeness on opening night that most likely will have disappeared by now. Quibbles aside, this is a highly entertaining riff on a literary classic, made fresh and frisky by a first-rate cast whose sense of fun is nothing if not infectious. With Shakespeare’s masterful words blended with tuneful uplift of big band favorites, this is a show that will certainly put audiences in the mood.