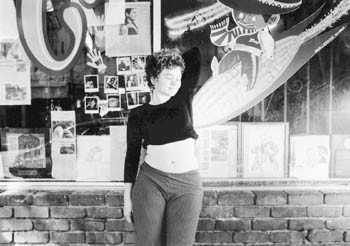 ‘Eclectic’ is too limiting a word for Beth Custer

Beth Custer lives about five lives at once in San Francisco, but she’s taking time out for local shows. Her upcoming Point Reyes performance brings in Custer’s latest band, Doña Luz 30 Besos, dubbed in tribute to an abuelita of a landlady named Doña Luz, with whom Custer stayed when she was studying Spanish in Oaxaca.

When not performing with Doña Luz 30 Besos, Custer collaborates with Joe Goode and the Dance Theater, which entails a musical residency at the LAB, a San Francisco arts showcase. Custer also busies herself teaching music and preparing for a long vacation trip to Spain, which will be followed by a recording session for the new Doña Luz album. She is also incubating a new film soundtrack for debut in November at San Francisco’s Castro Theatre–accompaniment to Kote Miqaberidze’s silent film Chemi Bebia (or My Grandmother), a once banned and little-known 1929 Soviet comedy. “It stars an Ernie Kovacs look-alike,” Custer says.

To keep busy, Custer is also taking a crash course in Spanish to further a fascination with Latin music that spurred her recent trip to Cuba. “I think about moving there,” she sighs with true love. “Every street corner has a cafe, where the music starts at 11:30am and goes on till 2am. There’s government support for musicians there, but you have to audition and then get certified class A, B, or C.” Cuba probably doesn’t need to import any musicians, but I bet they could use Custer, a class-A musician if ever there was one.

Mostly, I’d been familiar with Custer’s clarinet playing on the Club Foot Orchestra’s love theme from The Cabinet of Dr. Caligari, a cobwebby waltz that is miles away from her velvety session work on the underrated Connie Champagne album, La Strada.

Custer’s been playing piano since age three. She went from being a young prodigy to a BA in music studies at SUNY, Potsdam. Custer came out West on a bicycling trip and stayed put. In between her many projects, she finished up an MA in clarinet performance at San Francisco State University before turning back to the piano.

Custer grew up expecting to become a classical musician. Indeed, she ended up in one of the most eccentric orchestras since Raymond Scott’s–the Club Foot Orchestra. This ensemble, founded by Richard Marriott, went from a one-room nightclub to international performances of original scores for silent classics such as Metropolis and Nosferatu.

The orchestra’s membership waxed and waned, at one point including the distinctive Ralph Records guitarist Phil “Snakefinger” Lithman. Eventually, Club Foot fielded some CBS money doing the soundtrack for the Twisted Tales of Felix the Cat, a noble attempt to bring back the wonky surrealism of the pre-Mickey Mouse cartoon pioneer.

“It was extremely low pay for a 12-piece band,” Custer said in 1998, “but later you get royalties for these things, and television royalties are pretty happening. It’s gotten me through the bad times financially.”

Work with the orchestra began Custer’s performance of original music. “I went from free improv and solo concerts to writing down stuff. That’s when I started to blossom as a composer.”

The Doña Luz concert may also include a song that she’s recorded three different versions of, “In the Broken Fields Where I Lie.” The song, an excerpt from her own Vinculum Symphony, is “a final ode to my grandmother,” Custer notes. The Vinculum Symphony is Custer’s other project this year, which she’ll perform with the Minneapolis Symphony.

I sought in vain some vinculum (bond, that is) that connects all of Custer’s work, but it’s easier just to listen to the music of this multifaceted performer for whom the word “eclectic” itself is far too limiting.