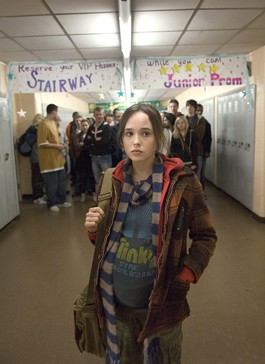 One of the year's best, 'Juno' is hilarious, heartfelt and real

J uno MacGuff (Ellen Page) is a quirky teen, as sarcastic as she is intelligent. As her story begins, the feisty 16-year-old, via gallons of Sunny D and multiple home-pregnancy tests, confirms her suspected pregnancy from a one-night fling with her best friend, Paulie Bleeker (Michael Cera). After considering and rejecting an abortion, Juno instead decides to have the baby and give it up for adoption. But this course of action involves telling her parents of her predicament and subsequently getting so very obviously preggers that everyone at school—nay, the world—can’t help but notice.

Complicating her life even further is the unique relationship she strikes up with the wealthy suburban couple (Jennifer Garner, Jason Bateman) she selects to adopt her child and her continually fluctuating emotions about Paulie.

Juno is a film both unconventional yet easy to relate to. It flirts with the eccentricity of Napoleon Dynamite but is ultimately grounded in an authentic realism. Blogger-turned-screenwriter Diablo Cody’s screenplay avoids many of the typical Hollywood traps; there are no tidy resolutions or sappy lessons to be found here. Unplanned teen pregnancy is not glamorized or romanticized, but neither is it the worst disaster that could ever befall poor Juno. Refreshingly, it’s just something unexpected and maybe a little unfortunate.

The incident of conception is not the logical beginning of a story that succinctly spans the nine months of a pregnancy, but something only glimpsed in sporadic flashbacks. Thus we are dropped in the middle of events already set in motion. Juno’s world feels like one that has existed somewhere else all along. If there isn’t anything particularly daring about the ensuing story, the film nonetheless manages to arrive fresh and original entirely through its very distinctive voice.

Juno herself is one of those characters who can be perfectly pictured just from reading her dialogue as it is on paper. Not to take anything away from Page’s star-making performance—she earns all the award buzz her performance is getting, and then some—but first-time screenwriter Cody has managed to create one of those characters who is instantly her own persona. Juno is imbued with a distinctive dry wit and deadpan delivery sprinkled with perfectly placed pop-culture references (the timing of “Thundercats are Go!” being just one highlight not to be spoiled here).

Cera’s passive and unassuming Paulie Bleeker, although but a slight variation on the young actor’s other roles (Superbad and George Michael Bluth in the short-lived sitcom Arrested Development ) is almost the perfect counterpart to Juno’s constant sassiness, bested only by the fantastic J. K. Simmons as Juno’s good-humored working-class father. The interactions between the doting father and his knocked-up daughter are some of the most heartfelt moments in this very heartfelt film.

Juno expertly conquers the oft-botched hybrid dramedy genre, successfully mingling somber moments among its many comedic scenes. When things get serious for a bit in the third act, the film doesn’t stumble into a depressing fog; instead, it deftly keeps our interest by remaining both sincere and touching. There isn’t much emotional ground left untouched in Juno , and every moment feels just as real and engaging as the rest of it. Juno is not only one of the funniest movies of the year, but also the most satisfying type of comedy. When it’s funny, it’ll make you laugh; when it’s not, it will still make you smile.