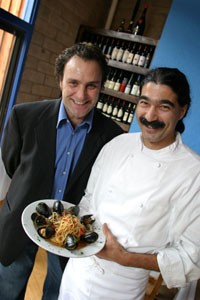 Belle Arti makes a meal fit for the King

My entire karaoke repertoire consists of precisely two songs: “Swinging Doors” by Merle Haggard and “Burning Love” by Elvis Presley. At first glance, this fact would apparently have nothing to do with Belle Arti Trattoria Siciliana, the neat little Sicilian restaurant tucked in the back of the Main Street Exchange, the square, brick fortress of a building that also houses the area’s state and national political representatives in downtown Napa. But as the late crime noir writer Jim Thompson used to say, things are not always as they seem.

The early evening chill had chased away most of the tourists as my dining companion and I made our way down Main Street, searching in vain for the trattoria. We had the right building, but no restaurant was in sight. Spinning around to go back the other way, I bumped into a sandwich board set up on the edge of the sidewalk.

The winged face of a woman with snakes for hair gazed out from the sidewalk sign. Three bare female legs splayed out from the Gorgon’s head like evenly spaced spokes on a wheel. The face was strangely compelling.

I knew that Greek myth holds that staring into the Gorgon’s eyes can turn a man to stone. Later, I’d learn that the cultish looking symbol on the sandwich board is known as a trinacria, the official symbol of Sicily: the three legs denote the three extreme points of the Mediterranean island off the toe of Italy’s boot; the three chaffs of grain represent the island’s fertility.

It’s the accepted imprimatur for all things Sicilian these days, but spiraling down into the Gorgon’s gaze, I recalled its Greek origins–the horrific creature composed of three daughters of the gods of the seas, their powerful tentacles dragging humans down to watery graves, a constant reminder to a seafaring people that sometimes the ocean’s bounty is dark indeed.

“Belle arti” means “beautiful art” in Italian, and the Italian obsession with trinities dominates the restaurant’s décor, from the room’s primary color scheme–a large painting of a blazing fluorescent red rose, soothing Mediterranean blue walls, cheery canary yellow highlights–to ubiquitous trinacria of various sizes on flags, tapestries, support beams, and tiles. It seems co-owners Santi Sacca and Rosario Patti (also executive chef) brought more than a little bit of Little Italy with them when they relocated from Brooklyn to Napa after 9-11. The place has culture.

This made the trattoria the ideal place to begin our multicultural nocturnal activities, which that night included a karaoke date with Randy Hussong and Kevin Radley’s “Elements from the Hot Rod Rodeo” at the Di Rosa Preserve’s downtown gallery, Off the Preserve, just three blocks away from the restaurant. Hussong was going to plug One Million Watt Karaoke Elvis on Viagra–a 25-foot-long sculpture of a top fuel dragster made out of metal rails, a red velvet headboard, and 1 million watts of audio components–into a karaoke machine and open up the mic to the audience. I was prepared to perform “Burning Love” for the occasion, and the stage fright that has haunted me throughout my karaoke career was already making itself known. Heavy fortification with food and beverage was called for.

Belle Arti did not disappoint. Complimentary slices of Italian bread, olive paste, and a Sicilian-style salsa I didn’t catch the name of (our waiter was a tall, dark, handsome lad for whom English seemed to be the second language, Italian the first) laid a firm foundation for the gustatory pleasures to come.

Sicily is where Italy and the Mediterranean meet, and the dishes offered at Belle Arti are similar to fare you might find at a restaurant specializing in cuisine from southern France or eastern Spain, which border the same sea. The region has an affinity for fine olive oil, and it can be found in most of Belle Arti’s creations. Still, there’s no mistaking that this is Italian cuisine, from pesce del giorno (fish of the day, $12.50), to penne alla norma (noodles and sautéed eggplant, $9, one of the few vegetarian entrées) to bistecca alla Fiorentina (38 oz. porterhouse steak prepared Florentine-style for two people, $38).

We began with zuppa del giorno ($6), the soup of the day, which was lentil, with tender, brown legumes simmered in opaque broth that proved the perfect warmup. Our waiter was attentive but not intrusive, providing us plenty of time between dishes. Our wine selections, Napa Knoll Cabernet Sauvignon 1996 ($9 per glass) and Mario Perelli Minetti Cabernet Sauvignon 2000 ($9), arrived with our salads, insalata di mare ($9.50) and a spinaci e formaggio di capra ($9.50).

The insalata di mare stared up at me in much the same way as the Gorgon, a maze of chilled white squid, pink shrimp, and purple octopus tentacles swimming in lemon juice and olive oil. My favorite bite of the night: I wrapped a leaf of Belgian endive around one of the largest tentacles and soaked it in the sweet, lemony juice, forming sort of a mini seafood burrito that forked easily into my mouth before sliding to its rightful home in my stomach.

The spinaci e formaggio di capra, spinach and goat cheese salad, featured a mound of fresh, clean spinach topped with four silver-dollar-sized wheels of baked goat cheese and finished with a balsamic and olive oil house dressing. The leaves were succulent, the wheels crusty golden brown on the outside and creamy delicious on the inside.

Other appetizers and salads available at Belle Arti include antipasto della casa (an assortment of house-made appetizers that goes beyond the usual salami and olive sampling, $9), caprese di bufala (buffalo mozzarella with fresh roma tomatoes and basil drizzled with olive oil, $9.50) and insalata tre colori (in yet another trinity, a salad of radicchio, endive, and baby greens, $5).

Everything to this point was prepared with extreme competence, but unfortunately, that didn’t prove to be the case with the picatta di vitello ($19), veal scaloppini in a lemon, caper, and garlic butter sauce. The two pale, palm-sized scallops of veal I received were the real milk-fed McCoy. The sauce was superb, light, blended smooth, with just a hint of citrus. But the tiny cutlets were overcooked and tough and chewy as a ham steak, negating the intended purpose of such a politically incorrect menu selection in the first place: to enjoy the luxurious tenderness of genuine veal.

But Belle Arti pulled its fat from the fire with one of that evening’s specials, lobster fettuccine ($21.50). Boiled in what must be the Sicilian version of bay seasoning and served in the shell atop a mountain of perfect al dente noodles slathered with rosemary-rich tomato sauce, the tender chunks of lobster meat brought back fond memories of all the cioppino feeds I’ve attended over the years.

As for the wines, both the Napa Knoll and Mario Perelli Minetti leaned toward the tart, cherry side of the taste spectrum, with the Napa Knoll barely edging the Minetti in boldness. There’s also a large selection of imported Italian wines and dessert apéritifs. Unfortunately, karaoke was calling, and we had to forgo the dolci del giorno (chef’s last minute whimsy of special desserts, $6.50).

The food and wine had done their job, and my stage fright had disappeared by the time we made it over to Off the Preserve. I took my place at the mic and thrilled an audience of teenage girls with my rendition of “Burning Love.” Over their adoring screams, I heard a high-pitched chorus cutting through the karaoke din–Hussong, my dining companion, and an unidentifed patron, howling through the mic that was hooked up to One Million Kilowatt Karaoke Elvis on Viagra.

All and all, it was a night fit for the King, and it all started with dinner at Belle Arti.