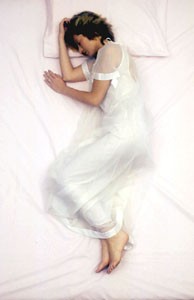 Supposed Repose: Slumber is only a part of it.

More than just something to sleep on

Every 16 hours or so, most humans simply wish to do one thing: drop. Down we must inevitably go, to spend roughly one-third of our lives in that rasping, dreaming, snoring state of sheet-trapped flatulence and night sweats known as sleep. Ever adaptable, we can essentially drop anywhere: in a car alongside the freeway; on a small, fragrant fluff of pine needles in a forest; at a dinner table alongside the soup. Yet choosing where one sleeps, as opposed to simply dropping, means choosing a bed.

Cradle to crib to single bed to bunk bed to dorm bed to futon to double bed to childbirth bed to family bed to king-sized bed to death bed–a short and chillingly simple description of Western lifelines is easily sketched by that bed which accompanies each stage. Give the pillows a quick shake when you’re done.

Both public and private, sure, beds are for sleeping. But they’re also for reading, eating breakfast, lovemaking, doing crafts, being ill, drinking wine, listening to the radio, watching TV, talking on the phone, nursing the baby, telling stories to the children, telling secrets to lovers, paying bills and writing poetry.

In essence, beds regularly act as small islands tucked away in specific rooms upon which lovers begin and end; food is served; children are procreated, fed and comforted; and art and communication occur. Glassblowing, jam making and carpentry are just about the only things that can’t be accomplished on them–and that’s only if you’re not careful.

Heck, former Massachusetts governor Jane Swift campaigned from bed in 2001, confined there while carrying her twins to term. And Southern novelist Flannery O’Connor wrote some of her most acclaimed work while crippled in bed from lupus. Forced to return to her mother’s Georgia farm, O’Connor sat up in the sticky sheets notating by hand while peacocks screamed outside in the heat. From that short territory, her imagination caressed the heartbreaking and the grotesque.

My great-aunt Mabel took to her bed when she was 67, determined to die. A hale and healthy Christian Scientist, she decided to let God have her, and soon, please. Four years later, she still sat in a variety of begrimed satin bed jackets, a fierce set to her jaw. Too greedy to starve herself, she finally wasted away from an early dementia that was unattractively satisfying to close family members.

While beds indeed host the sick, the pregnant, the reader, the toast eater, the artist and the insane, they are also always just one point of inquiry away from intimacy. We train ourselves not to imagine our relatives producing babies on those mattresses. It’s one thing to giggle over wine at hearing the proficiency a friend’s new lover exhibits, another thing all together to consider that comforter under which he regularly performs it.

So we toss our jackets on beds, lay purses on them at dinner parties, put our visiting babies to sleep on their middles, tip-toe past them on the way to the toilet and essentially decide to formally ignore any private presence in our public lives.

Yet an intensely private and personal thing, be we celibate or lusty, a bed is. Thomas Moore, the savant priest who writes extensively on sexuality, suggests in his book The Soul of Sex that a bedroom should be a sanctuary with the bed itself an opulent altar. One’s own personal notion of opulence–be it silk, sleeping bags or clean cotton–dictates.

My own early knowledge of such sanctuary came at age 13, when using the master bath in a friend’s house. I came out and glanced briefly at her parents’ bed: long and narrow with unlovely sheets and just one thin blanket marred with age balls. I instantly understood that they no longer loved each other. Within the year, I was of course absorbed in gassy death-poet Sylvia Plath.

On the lighter side, my friend James careened through the last of his college years and into his mid 20s as a self-proclaimed “couch god.” He explained that a couch god denies the personal burdens of domesticity; he just borrows them. Surfing his friends’ couches, sleeping as he went on the lumps and springs and old chips and loose change of borrowed sofas, James believed that a couch god was among the last free men in the Western world.

This hobo of the living room attained his liberated status simply by refusing to own a bed. Along with such blanket rejection came a denial of long-term intimacy, mortgages or the visiting of an Ikea outlet for anything other than the meatballs.

For my buddy Dennis, a bed is a symbol of yearning. For years he endured the chaste penance of sleeping each night solely upon a foam yoga mat, refusing to purchase even a futon until he had a suitable lover. He thinks he’s found her, and when last we spoke, they were on their way out to get lunch and price queen-size mattresses. “Hooray!” I shouted a bit too heartily, knowing the metastory of this shopping expedition. “Thanks,” he said with shy pride. “We plan,” he lowered his voice, “to break it.”

Actually, I know lots of people who have broken their beds–or rather, have simply found beds to break. Curiously, one rarely seems to break one’s own. I myself have broken my sister’s bed, but that’s OK because she broke our mother’s guest bed.

My niece took advantage of her unhappy parents’ 20th anniversary weekend away to break their bed with a variety of partners. “Someone has to use it!” she hissed in furious late-adolescent rebuttal across the dinner table. The family sat in silent awe, considering not so much her flamboyant sexuality as her flamboyant disregard of the sanctity of the marriage bed, arid though it may have become.

Because while we may spend our early adulthoods frolicking indifferently across squatters’ mattresses laid on the floor, the marriage bed has an impermeable dignity. Even the most adulterous spouse knows better than to foul it. The average 60-by-80 inches of a queen-size mattress has been the wrestling mat for spit-addled arguments, a stage to buoy forms enjoying the sweetest times, and has felt both the warm slumber of two relaxed sleepers and the icy elbow-shove of those too restless to cooperate even when unconscious.

Sharon, whose husband died last summer, insisted that my husband and I use her bed when we recently visited. We protested; she insisted. “It would be nice,” she said softly, “to have happy people in it once again.” So we slept in it, made quiet love in it and hoped to heal it. All we probably really did was to produce more laundry, but sometimes a bed is more than just a place to lie down.