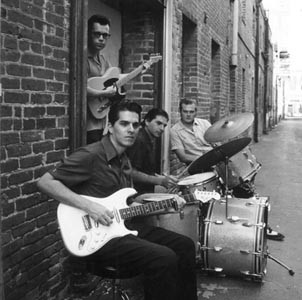 Battle of the Blues

Local bands duke it out at Battle of the Blues

WHICH IS SONOMA County’s best up-and-coming blues band? Maybe you have an opinion already formed in your mind, or perhaps you don’t have a clue as to what the local blues scene has to offer. In any case, on Thursday, Dec. 2, we’ll get an answer of sorts when four local blues bands duke it out for the title at the first Annual Battle of the Blues at Rumors Nite Club in Santa Rosa.

Ron LaFranchi, Sonoma County native and owner of Hedgehog Productions, is the mastermind behind the event. A good deal of LaFranchi’s motivation for the contest sprang from his frustration about how other battle of-the-band events are often run.

“I wanted a less political approach to selecting a winner, which is why the audience will vote to select the winners,” he says.

Generally, so-called expert panels are used in judging such contests, but LaFranchi’s approach is a more honest one–it acknowledges that music fans are sometimes better judges than those in the business.

LaFranchi chose the battling bands based on their talent, original material, and the fact that they are lesser known. The lineup currently includes the Aces, Hall of Mirrors, Hott Spell, and Blue Blazes.

“I could have easily added Eric Lindell to the bill, for example, but I felt there are other bands that are as deserving but less visible,” he says.

The location is equally important to LaFranchi: “I also wanted a good venue and found Rumors to be that,” he says. “It has a capacity of 500, a large stage, probably one of the largest dance floors in Northern California, and an exceptional sound and light system.”

The competition will feature a wide variety of blues stylings, and each band will be given a 45-minute set to perform original material and one cover tune.

“Having the bands play a cover song will help give the audience some point of reference, since it’s unlikely they’ll be familiar with the originals,” LaFranchi said.

Attendees will receive a ballot with their admission ticket. The votes will be tallied and the winners announced at the end of the event. The lucky first-prize winner will receive recording time at Prairie Sun Recording Studios–pure gold to any musician.

LaFranchi is no stranger to the local music community. He manages the bands Pen Fifteen, Powerbalance, and Butter B Down and has produced a long list of benefit concerts for Kid Street Theater, the Polly Klaas Safety Fair, and, most recently, the “Rockin’ for Rio” show put on to help flood and mudslide victims of Rio Nido. As if that weren’t enough, LaFranchi also booked the Moonlight Restaurant & Bar in Santa Rosa for a two-year spell and is currently booking live acts on Thursdays at Rumors.

LaFranchi’s desire to renew interest in the local blues scene also plays a huge role in his creating this contest.

Catch the Battle of the Blues on Thursday, Dec. 2, starting at 6 p.m. at Rumors Nite Club, 120 Fifth St., Santa Rosa. Tickets (for 21 and over only) are $10 and are available at Stars Music in Petaluma and Santa Rosa, Backdoor Disc and Tape in Cotati, and Rumors Nite Club in Santa Rosa. For details, call 545-5483.