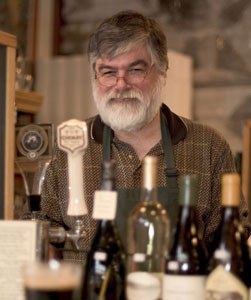 With its hidden backroom bar, Sonoma's Wine Exchange is as much about the suds as the grape

There’s an old wine-industry adage that says, “It takes a lot of good beer to make a fine wine.”

Dan Noreen, proprietor of Sonoma’s Wine Exchange, is inclined to agree. Since 1989, he has kept six draft beers on tap in a hidden bar at the back of his wine shop, with an additional 250 different brews lining the south side of its Plaza location, which locals have come to simply call “the Wall.”

“All along, we thought it was important to have wine and beer together, particularly considering the fact that we have so many winemakers in the area who love to drink beer,” says Noreen, a bearded, bespectacled man whose reverence for beer and wine is of the sort usually associated with antiquarian book collectors.

“We’re very exclusive as far as what we serve. We don’t serve any products from Miller, Budweiser or Coors,” Noreen continues in his characteristic matter-of-fact tone, which measures an average of diffidence and defiance.

His eyes narrow as he continues. “None of the big brewers, none of their off-brands or their so-called premium brands. I don’t want to do business with those people. They try every day. Budweiser gave up years ago; they realized we were hopeless. I won’t even carry things that Bud is involved with, like Red Hook Ale, because I think that they are, unfortunately, anathema to fine beer, and they want to control the market.”

Noreen’s quiet rebel spirit informs every selection represented on the Wall. The guiding principle might be best summed up by a Monty Python gag: “Why is American beer like making love in a canoe? Fucking close to water.” Indeed, in a market where domestic brewery conglomerates have recently gulped down several microbreweries in an attempt to imbue their lines with some indie cred, guides like Noreen become necessary to separate the real suds from the Buds. His is one of a few independent outposts, if not the only one in the county, dedicated to this notion. His requirements are simple.

“High quality. The beer has to be balanced, in terms of the classic style, and intense,” he lists. “We like to support small local producers. We also like to support small European breweries. If we can find a niche in either of those markets, which are vastly different, we’ll support them,” says Noreen, who has made a study of wine and beer since 1976. “For instance, there are breweries in Europe that are huge but make extraordinary beers, like Pilsner Urquell or Budvar in the Czech Republic. It doesn’t matter if they’re big if they’re making great stuff.”

The implicit commentary is that size matters only when in the States, where, in this case, bigger is blander, not better. The European-produced brews, conversely, are distinguished as much by their craftsmanship as by their taste. For example, the Czech beer Budvar is brewed and bottled only in the city of CeskÈ Budejovice on the Vltava River south of Prague. It uses Zatec hops, Moravian malt (both named for the lauded regions where they are farmed) and soft water drawn from the brewery’s own well.

What is perhaps most germane is that Noreen omitted part of the Czech beer’s name, which is actually “Budweiser Budvar,” though it has no relation to the fizzy water imbibed back at the frat. Was Noreen hoping to avoid confusing the neophyte holding the tape recorder in this conversation, or, as this reporter prefers to think, did he overlook it out of respect?

“Dan is my kind of wine guy and beer guy, too. He’s really serious about it and treats it like a lifelong study,” says wine importer John Kwitkor, who makes the Wine Exchange one of his regular stops. “It’s the best parts of the art and academia. There are not a lot of people in the business that have it down.”

Another gentleman at the bar, pint in hand, likewise weighs in.

“I’m a home brewer, and these guys always have beers on tap that you can’t go get anywhere,” observes regular Rick Lachmiller, who quips that the time he spends at the Wine Exchange is research. “Learning how to make beer and tasting some of these beers has trained my palate.”

Such research has also lead Noreen to champion several locally produced brews as well as his prized European beers.

“In Sonoma County, we’re blessed with several small, super-high-quality brewers,” says Noreen, citing Brian Hunt’s Moonlight Brewing as one of his favorites. “It’s a one-man operation, and he’s amazing. He started out at Schlitz, and now he’s making some of the finest beers in California. Russian River Brewing Company is doing a fantastic job out of Santa Rosa,” he adds. The Lagunitas Brewing Company and North Coast Brewing Company are also well represented at the Wine Exchange, which, to the chagrin of some patrons (namely those with day jobs), keeps banker’s hours during the week.

“We’re often criticized for that, but people have to remember that we’re actually a wine and beer store, and the bar is for fun,” Noreen reminds, pointing out that the bar is often a late discovery for some patrons. “People come who have lived here for 15 years and say, ‘I didn’t know you had a bar.'”

By strictest definitions, however, Noreen says his back room is a “tasting room,” which he contends is a philosophical rather than legal distinction. Likewise, the hours keep the crowd to a dedicated fellowship of daytime imbibers, connoisseurs of every stripe with a penchant for the finer things. Lately, this has included a taste for Belgian beer, a cultlike phenomenon among beer enthusiasts.

Among those Noreen proffers is the St. Bernardus Abt 12 (its label depicts a robed monk wagging his finger, presumably at the drinker, with cheeky dismay). A well-structured brew, it has a sweet malt profile wonderfully underscored by a bitter chocolate finish, and is worlds apart from anything available from joints with neon in the windows.

“Those beers are so amazing, there’s nothing like them in the world. The efforts being made in California are improving, but we have a long way to match the classic Belgian beers. Those guys are insane,” Noreen says. His eyes brighten as he reflects on specific beers.

“I’m thinking of breweries like Gouden Carolus–they used to have a trough that would float around the top of the brewery, open to the air. Now imagine what that does to the beer?”

Suddenly, I am reminded that beer is indeed a living thing, and become self-conscious of the fact that I’ve let my eyes fall to my glass, perchance to spy some beneficial microbes swimming in the froth like drunken sea monkeys. Noreen is too polite to notice, and soon our chat has departed Belgium for a town just east of Staffordshire, England.

“Or Burton-on-Trent, where Marston’s has that Burton Union cask system where the beer ferments through a whole series of wooden casks,” Noreen continues. “They’re really ancient, but perfect for what they’re trying to do. I think we suffer from that, and obviously we don’t have the established familiar brewing system in Belgium and Germany, where people inherit the brewery and don’t have to start it up.”

My eyes begin to glaze–not from the turn in conversation, but from Pliny the Elder, one of the Wine Exchange’s most popular drafts (on this visit, all customers within arm’s length of me were drinking it). Made by the Russian River Brewing Company, the hoppy beverage is named for the first-century Roman naturalist, scholar and historian who is credited with inventing the botanical name for hops, Lupus salictarius, apparently meaning “wolf among scrubs.” At 8 percent alcohol, one can see how the term “loopy” comes from lupus. Noreen notices that I might have turned a corner, especially when I suggest that all of this to-do about fine beer is tantamount to a crusade.

Noreen deflects the notion, but says, “Fortunately, we have lots of fellow crusaders that are helping us out.”

I order another as Gary Kirkhofer, one of the Wine Exchange’s handful of loyal employees, reaches for a tiny mallet and plays a brief tune on a miniature xylophone atop the counter. The quaint chimes means it’s 15 minutes to closing.

“The key to this is that we’re really committed to quality, we really want people to experience beers, and of course wines, that are of such high quality that they will be amazed about what they’re drinking,” says Noreen. “Or perhaps have a life-changing experience and say, ‘Wow,’ because that’s what it’s all about.”