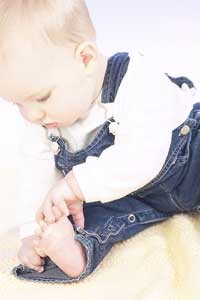 Knee-Biter: Babies are born to asanas.

Will they replace lattes, too?

Tiny yoga studios and Indian restaurants abound in San Francisco’s Mission District, a neighborhood that has in recent years become increasingly filled with trendily inked scenesters. Not that there’s anything wrong with tattooed hipsters; following trends is as common as yellow LiveStrong bands and Levi’s 501s in that fine city. I like to go to one particular studio on Valencia Street because the classes are taught and attended by other waitresses with expensive highlights who, like me, try to keep grounded and preserve their figures through the asanas of yoga, combating the party lifestyle that being a server in a fancy-pants restaurant encourages.

Over the last few months, however, the class size has dwindled from nine to seven to five to four. The reason? Many of our yoginis have gotten pregnant and moved to Marin, where I assume they no longer follow hair trends (salon fumes are bad for the in utero fetus). Although it’s only a few miles away, Marin is a world apart from the Mission District.

On one recent Saturday in Mill Valley, some friends and I pulled up our usual rocks at the boulder circle in front of Peet’s Coffee. These boulders are like the high school quad for cyclists on weekend mornings. From about 9am until noon, a rotating cast of spandex-clad men and women soak up the sun, stretch and sip oversized Peet’s mugs before (and after) heading up the roads of Mt. Tamalpais. While I always look forward to these weekend mornings for the beverages and the company, I do not look forward to waiting in line at Peet’s.

The fact that I’m standing sweaty in skin-tight Lycra surrounded by nonsweaty, attractively dressed people who stare has a lot to do with it. Further adding to my angst are the claustrophobia-inducing crowds and the lack of good pastries. But the real reason I hurry through the line as quickly as possible are the small blonde children. Led by young, athletic men wearing Keen sandals, toddlers with names like Cailie and Lily and Brody and Morgan howl in rage and bite my knees because it’s not yet their turn at the counter.

After gritting my teeth against the bedlam and sweating even more in an enclosed space filled with cute dads who pay me no mind, I unwind a Brody from my ankle, collect my coffee and head back out to the rocks and relative quiet of other cyclists checking out sexy SUV-driving moms (one reason my buddies like to sit in this particular spot).

I don’t remember Peet’s being like this five years ago. Back then, everyone seemed to be in sweaty spandex telling dirty jokes and shooting the breeze about trail conditions on Tam. I remember the women who ordered lowfat scones and nonfat lattes, and the men who checked them out. Apparently, while I was busy writing, these people got busy getting busy and now the coffee line is full of little knee-biters.

In an area ranked as one of the most expensive and fashionable places to live in the entire world, it makes sense that Marinites keep up with trends. First it was yoga, then Kabbalah, now babies. Supermodels did it in the late ’90s, followed by Madonna and her protégée Britney. Demi Moore made it hot to be photographed while pregnant, and now the girls in my yoga class and the boys who used to ride bikes are following suit and spawning.

Babies are everywhere. One of my favorite magazines (sad but true: Us Weekly) recently had a special “baby issue,” complete with updates on Britney in her seventh month (she was still chomping Cheetos and swilling Starbucks caramel Frappucinos), what color Jen and Ben were painting the baby’s room (apple green) and how long it would be before Paris Hilton was expecting (she said two years).

Time passes, and it follows that the self-obsessed, Prana-clad, yoga-mat-toting city girl has become the family-obsessed, Anne-Taylor-maternity-wear-clad, jog-stroller-pushing Marin resident. It may seem a stretch, but babies have become the new yoga.