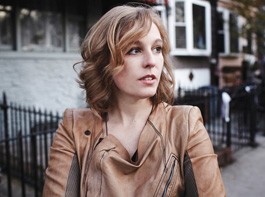 Another Country isn’t just the name of Tift Merritt’s third studio album; it’s a statement of purpose for the red-haired, high-heeled singer-songwriter from North Carolina. Ever since her 2004 roots-rock, Grammy-nominated scorcher Tambourine blazed past expectations set by her calm, Dusty in Memphis&–style debut, Bramble Rose, Merritt has wandered from the cow fields of traditional country music and explored the moss-covered wooden fences on its perimeter, coming up with soul-tinged diamonds about the taller, greener grass on the other side.

This year, Merritt traipsed even further with See You on the Moon, where she’s discovered a meadow all her own. Part Emmylou Harris, part Mazzy Star’s Hope Sandoval, Merritt sings with an airy, breathy timbre that renders beginnings or endings of her lines elusive, and the album’s production does the same for her obscured country roots. “Feel of the World” features My Morning Jacket’s Jim James, “Engine to Turn” ends with a straight-up Crosby Stills & Nash harmony, and the sweet lines of “Danny’s Song,” a soft-rock hit for Loggins & Messina, sound like they’re being shared secretly between an excited young couple—the way the song’s written—instead of broadcast innocuously on a thousand dentists’ office radios.

What Merritt shares with early Joni Mitchell is her desire, in love, to please; she wants to knit you a sweater, to write you a letter, to make you feel better. Hearing a friend recently complain that women are only good for “headache, stress and an early grave,” leads me to prescribe repeated listens of Merritt’s “Keep You Happy,” a reflective five minutes of soft reassurances that the feminine soul is, in fact, capable of spreading contentment. Likewise, her new single “Mixtape” casts a homemade cassette as a microcosm of everything she wants to give to you—songs, stories, passion and art. It’s driven by falling strings and handclaps, and it’s stunning like an autumn sunset, and it’s not country music at all.