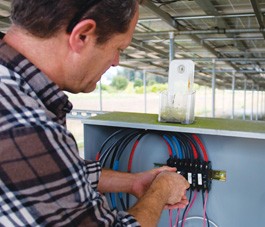 Robert Bulterman never counted on PACE to save his business. The 46-year-old electrician and solar technician, like a lot of green-collar workers, had admittedly held high hopes that the Property Assessed Clean Energy Program would infuse the overcrowded sustainable-energy industry with a slew of much-needed jobs. But to count on it doing so, he says, would have been “just plain stupid.” As it turns out, Bulterman’s skepticism was well-founded.

“When I heard PACE got put on hold, I just thought, ‘I knew it,'” he says from the driver’s seat of his white Chevy Cheyenne utility truck en route to one of the few solar jobs he was able to land in the ruthless Central Coast solar market. “When it takes off—if it takes off—I think it could quadruple my business, and there would be enough to go around. But I’m not going to assume that’ll happen.”

“PACE” is a general term used for a host of different alternative-energy financing schemes that evolved from a program pioneered in Berkeley in 2008 and which are now being replicated in 22 states nationwide. Indeed, the programs are so promising that the Obama administration has committed $150 million in stimulus money to help them get off the ground.

Under a PACE program, a homeowner who wants to buy green technology like solar panels but can’t qualify for a bank loan for the $15,000 to $30,000 needed for a typical system can receive funding from a local municipality. The homeowner then pays back the money, with interest, over a 20-plus-year time frame through property taxes. The plan, which attaches a tax lien on the property itself instead of loan debt on the individual, seemed the perfect way to get everyone—regardless of home equity or credit—on the path toward green energy use.

In Sonoma County, like the 13 other counties in California that were looking to participate, the program had been approved by local leaders and was just about to start accepting applications when word came down in early July that the effort would be put on indefinite hold. On July 27, Sonoma County sued to protect the right to operate its program.

The reason for the hang-up was that government-backed mortgage giants Fannie Mae and Freddie Mac, along with their regulatory body, the Federal Housing Finance Agency (FHFA), backed out of supporting the program over concerns that the tax liens would take precedence over the mortgage loans in the event of foreclosure—in short, that a homeowner who defaulted on a home loan would technically have to pay off his PACE lien before paying off his mortgage. The result? Freaked-out lenders. The companies have since vowed not to grant any loans for properties that participate in PACE.

“PACE loans are unlike routine tax assessments and pose unusual and difficult risk-management challenges for lenders, servicers and mortgage securities investors,” reads a statement released July 6 by the FHFA. “[These] programs present significant safety and soundness concerns that must be addressed by Fannie Mae, Freddie Mac and the Federal Home Loan Banks.”

Because Fannie and Freddie collectively own or guarantee roughly half of all U.S. mortgages, their participation was crucial to the programs’ success. Since the dust-up, gubernatorial candidate and California Attorney General Jerry Brown has filed suit—in addition to the county of Sonoma —against the mortgage corporations and the FHFA, with Brown saying that “Fannie Mae and Freddie Mac received enormous federal bailouts, but now they’re throwing up impermeable barriers to bank lending that creates jobs, stimulates the economy and boosts clean energy.”

The heart of the legal argument that now awaits lies in whether the PACE tax liens are legally considered loans, as Fannie and Freddie contend, or assessments, as Brown and the various participating counties insist they are.

“These programs involve assessments, not loans, and there are decades of law that define assessments,” says Liz Yager, program manager for the Sonoma County Energy Independence Program (SCEIP), the only program in California to keep running despite the threats from Fannie, Freddie and FHFA. “Every time someone calls it a ‘loan’ it’s misleading.”

There is a love-hate relationship between green technology installers and local PACE programs. On one hand, the promise of government cash and tax rebates for buying expensive retrofits like solar panels has been key in bringing in business for workers like Bulterman, and PACE would no doubt have been the biggest draw yet.

On the other hand, however, that same potential gravy train has also brought an influx of prospecting workers—some strictly solar-specialized, others from a host of trades like roofers, carpenters, electricians and general contractors—that has overcrowded the local green job market, and, as one installer says, made it “cutthroat beyond belief.” As word of PACE spread, installers and wholesalers fought the impression that it would be a “silver bullet” for customers who have been content to wait to go solar until the sweetest deal comes along.

“People are always waiting for the next big deal for solar, even though a lot of them could get good loans by just going to the bank. Plus, they wouldn’t have to pay the 7, 8 or 9 percent interest that [PACE] programs quote,” says Peter Putt of Suns Up Solar, based in Santa Cruz. “There are so many players in the solar market that just because there’s another avenue for financing doesn’t mean the little guys are going to all of a sudden be making a bunch of money.”

Even in Sonoma County, where the PACE program is still running, the number of solar jobs available is less than the myriad workers on hand to do them. Yager says, however, that despite the rocky start, support for the plan remains strong, and that Sonoma County is happy to stand up to big mortgage companies that are looking to ruin the party.

“Our board of supervisors decided to keep the lights on and stand up for SCEIP,” she says. “There is a huge grassroots movement around this. We’re confident there will be a resolution.”

In the meantime, Bulterman says he’ll keep competing with the 10 to 15 other solar installers who bid on the same jobs he does, and that he’ll “take whatever work I can get.” Back in his truck, the electrician takes a phone call from a fellow installer whom he hires whenever he needs the extra help.

“Hey, Robin. Yeah, things are slow. You know how it is,” he says. “If I manage to get some more work somehow, though, I’ll have some for you.”

Turning toward me, he continues: “There you go. That’s one more guy that could be working if PACE went through.”