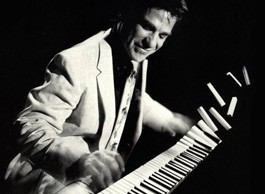 Pianist Mitch Woods hammers away at the 88s

Mitch Woods, who calls his upbeat piano style “rock-a-boogie,” was an eight-year-old growing up in Brooklyn during the 1950s when he first heard boogie-woogie piano at an African-American neighbor’s apartment. “That sparked me,” he says during a recent interview at his Marin County home. “My stepfather got us a piano, and that’s what got me started.”

Nearly 50 years later, he hasn’t lost the spark. Woods says that he’s “really happy and excited” about bringing his band, the Rocket 88s, to this year’s Russian River Blues Festival on Sept. 12.

After three years of classical piano lessons which taught him the basics (“But I got bored,” he says), Woods started playing rock ‘n’ roll with neighborhood friends at Brooklyn and Greenwich Village hangouts like the Cafe Bizarre. “We were playing for $25 a night and all the salami sandwiches we could eat.” The club lacked a permit for live music, so when the police appeared, the owner cut off the electricity and the band pretended they weren’t playing.

Woods moved to Buffalo, N.Y., to attend college, and began sitting in at blues clubs and delving into the music of the boogie-woogie greats. One teacher, prominent jazz saxophone player Archie Shepp, invited him to join a local jam session, not expecting him to appear. “He challenged me the way older musicians challenge younger ones,” Woods says of Shepp. Woods took the dare but felt relieved to find the venue had no piano. “I gained his respect just by showing up, and he started to hip me to who to listen to.”

In 1970, Woods drove to San Francisco in a Volkswagen bus with his girlfriend Gracie Glassman, stopping along the way to play coffeehouses billed as “Mitch Woods and His Red Hot Mama.” Glassman, wearing a feather boa, would sing and play washboard to Woods’ piano. On arriving in the Bay Area, the duo expanded over the next decade to include former players with Boz Scaggs, Commander Cody and the Sons of Champlin.

Thus was eventually born Mitch Woods and His Rocket 88s, in which he’s currently backed by two horns, guitar, bass and drums. Woods’ deep love for the past masters of boogie-woogie, R&B and jump blues is evident throughout his music. He titled a mid-’90s release after a role he relishes, Keeper of the Flame. “I’m trying to keep it alive,” he says. “This is what I do.”

Woods first visited New Orleans in 1981 and now calls it his second home. “I fell in love with the city and the music,” he says. “Piano has a strong tradition there.” His latest release, Gumbo Blues, mostly songs by the New Orleans songwriter, producer and musician Dave Bartholomew, will be featured at his performance in Guerneville. “New Orleans music is a mixture of whatever’s in the pot,” he says. “It’s a melting pot of all these cultures.”

In the years since getting his first piano, Woods has also recorded with John Lee Hooker, Johnnie Johnson, James Cotton and Earl King. He received a nomination as the Pinetop Perkins Piano Player of the Year at the Blues Music Awards in 2007. Next month he’s off for a 20-city tour of Turkey.

Not bad for a neighborhood kid from Flatbush.