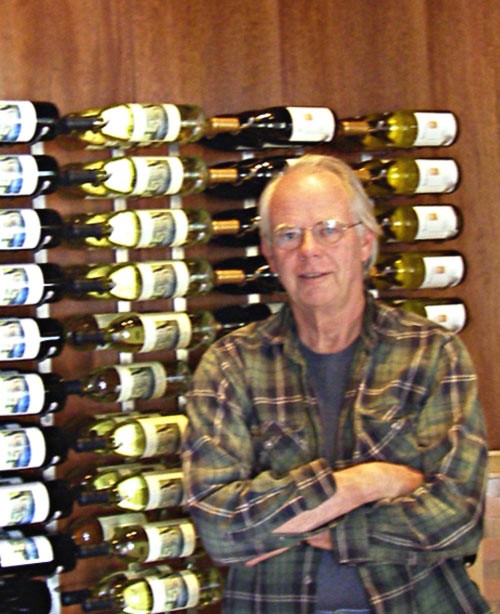 Fitting that Atascadero Creek should show up in Santa Rosa’s new, industrial-zone, urban tasting room. Over in Graton, amid the prestigious vine rows of Green Valley, where did winemaker Bob Appleby find himself when he sought to build a house? Zoned industrial, an artifact of Graton’s railroad days. So he built a winery—or a three-car garage—with a “caretaker’s residence” above. Appleby enjoyed wine, but hadn’t any particular designs on winemaking when a friend persuaded him to share a corner of his woodworking business with a barrel of Pinot Noir in 1989.

Encouraged by the accolades for his amateur efforts, Appleby eventually closed down the shop and went pro with the wine. A wry-humored sort who plays guitar around the area in a band called Bottle Shock and hauls out his Harley on the odd weekend, Appleby is clearly at home in the vinting life, but tells a story that’s more schlepping and hard knocks than boutiquey-pastoral: vineyards are ripped up under your feet, and if other wineries don’t pick your grapes when you’re not looking, they bid up the price. And the weather takes the rest.

He’s glad to be at the Wineyard, spacious digs with a big sit-around bar. Designed by Dino D’Argenzio of the so-named winery next door, it’s a comfortable space and still a bit in-the-works. Here, the fine product of students at Santa Rosa Junior College’s Shone Farm winery may be sampled, along with that of two other small producers.

The 2011 release of Atascadero Creek’s Ritchie Vineyard, Russian River Sauvignon Blanc ($21) has just a blade of grass in its fruit-bowl aroma of pear and white grapefruit, honeydew melon and pineapple with garnish of jasmine flower. Long finish, rich, but dry. Reminiscent of blackberry wine, the 2008 Haun Ranch Zinfandel ($28) is deep and rich, but the lip-smacking finish is efficient, Chianti-like. The 2008 Rail Road Vineyard, Green Valley Pinot Noir ($30), so named for an eccentric strip of old railway bed gravel, the trellis held up by sections of repurposed railroad track, is perfumed with orange rind, citrus blossom and raspberry compote.

It’s easy to see how this obscure winery has a good showing at local restaurants—all self-distributed within 20 miles of his house by the guy who made the wine. “And put the cork in it, and slapped the label on it,” Appleby adds.