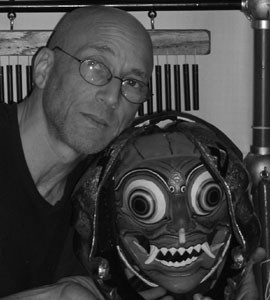 ‘Apocalypse: The Book of Revelation’

For actor-writer Eliot Fintushel, the end of the world is a one-man show

Anyone who’s ever sat down to read the book of Revelation–that fierce and fiery end paper to the Christian Bible–is no doubt aware that unless you’re a biblical scholar, a born-again fundamentalist, or a raving wacko, the 22-chapter book is a hell of a read. Emphasis on hell.

Purportedly penned by the apostle John while in exile on the island of Patmos, Revelation (imagine a first-century “dream journal” describing a deep-trance vision so trippy and freakish it would have made Timothy Leary give up drugs) is nothing like the comforting poetry of the apostle’s lyrical Gospel According to John. On the contrary, Revelation is confrontational, bizarre, dense with Jungian metaphor, ludicrously over the top–and damn scary. It’s no wonder that every Revelation-inspired movie, TV show, or novel (think of The Omen, Millennium, and the Left Behind series) has told its tale through the genre of horror.

It’s amazing, then, that in the world premiere of Eliot Fintushel’s bold, new one-man show Apocalypse: The Book of Revelation, John’s massive vision is staged in a way that illuminates the shock and awe of its recurring images but somehow steers the piece clear of expected horror clichés, all without resorting to satire or comic wink-winkery. One could even call it a miracle. Fintushel, a longtime Sonoma County actor and writer with numerous award-winning solo works to his credit, cleverly allows the book to speak for its own startling, roller-coaster self.

He brilliantly accomplishes this feat by acting out every single word of Revelation. All 11,995 of them. Perhaps it’s only Fintushel’s way of heeding the book’s spooky final warning, where plagues and eternal death are promised to anyone who “either addeth or taketh away” anything from the book. Whatever his spiritual inclinations might be, the result of his decision is bold, brave, mesmerizing–and, yes, occasionally kind of terrifying.

After all, in Revelation God reveals his step-by-step plan for the destruction of the world, from the battle of Armageddon to the final wiping away of the earth. It’s not a pretty picture, even when Fintushel describes the new world order while standing on his head.

Like the vision of John itself, Fintushel’s Apocalypse nearly defies description. Mixing the highly imagistic scripture with instrumental music, multifaced masks, dance movement, and other tools from the basic New Theater box of tricks, Fintushel is nothing short of mesmerizing. Barefooted, clad in black sweat pants and shirt, he fully commands the tiny little stage at the Loading Zone Collective.

With ingeniously choreographed movements, he takes turns playing God, the Devil, various spirits, the whore of Babylon and poor, rattled St. John himself, spilling his vision of talking beasts, seven-headed monsters, and bloodthirsty angels in an energized flood of adrenalized verbiage, like some nervous, wide-eyed guy at a party describing an acid trip while it is still technically occurring.

What catapults the show above mere recitation–and far beyond its religious trappings–is Fintushel’s breathtaking actorly interpretations of the text, as when a heavenly guide shows John the Lake of Fire, then repeats the words “lake of fire” with dreamy semisexual excitement. Whenever God appears, describing his love for his followers and the agonizing doom awaiting all others, Fintushel plays God’s flip-flop, from fatherly warmth to grimacing, shrieking wrath, with such suddenness and intensity that the result is terrifying.

Is God suffering from bipolar disorder? One begins to wonder.

Apocalypse–which Fintushel plans to take on the road after its North Bay run–has a few awkward transitions, mainly when Fintushel has to shift between his performance of the text and his singing and playing on a variety of ancient musical instruments. And given the intensity of the subject matter, one might also wish for a couple of laughs along the way–hey, the bit where John keeps worshipping the wrong person could be pretty funny–but such details are relatively trivial.

All said and done, Apocalypse–a one-of-a-kind theater piece, as disturbing as it is exhilarating–is a wild story simply told, and in the end, it’s simply unforgettable.

‘Apocalypse: The Book of Revelation’ plays in Studio 208 at the Kid Street Theater on the corner of Davis and Eighth streets in Santa Rosa. The show runs through April 5, with 8pm shows on Friday and Saturday, and 2pm matinees on Saturday and Sunday. Tickets are $10. 707.526.1481.