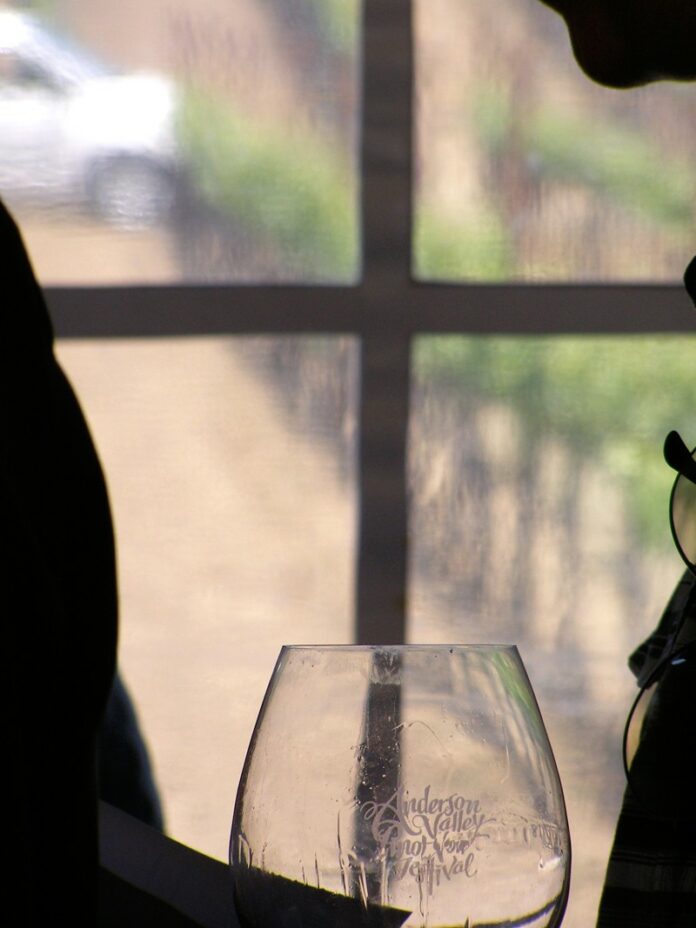 On the long and winding road, pull over for Pinot

Stylistically, Anderson Valley wines seem much closer to Oregon than, say, the Russian River Valley. The drive there certainly makes it feel that way. The road climbs, twists and dives, then repeats.

The virtue of this long, winding road is that there isn’t likely any driver in front or behind you for a long time. Until there is, and you know that you are not in Oregon. Fortunately, there are plenty of opportunities to pull out—unfortunately, just not enough for impatient drivers.

Anyhow, on to a friendly little Pinot Noir tasting put on by Anderson Valley Winegrowers. The 16th such festival, it’s hosted by Goldeneye Winery in a big tent in the middle of their manicured vineyards. By the warm greetings and banter, it’s clear that many of the attendees are in the business in one way or another, too. With over 2,200 acres of vineyard—compare to over 9,000 in Dry Creek Valley—the Anderson Valley wine scene is like a backyard party.

Angel Camp Vineyards’ winemaker knows something about driving Highway 128. During harvest, he commutes daily from Napa Valley—once a week during slow months. The couple who run Frati Horn (“wine glass” in Boontling) truck their grapes all the way down to Inspiration Vineyards’ warehouse joint in Santa Rosa to make their 2011 Pinot Noir—a cool, juicy rhubarb-flavored refreshment.

Joe Webb, the young general manager at Londer, explains that he does the footwork for a host of satellite clients—four or so who are pouring Londer Vineyard designates at the event. Gadgetry helps him out; he shoots a photo, uploads his stats and lines up some pick dates. His 2009 Swan Clone Pinot Noir has a nose like a wild raspberry dreaming it’s cotton candy.

Sonoma’s Williams Selyem has its Ferrington Vineyard, Napa’s Saintsbury has its Cerise—a bit fatter than many others here, and more like the most recent lineup of their Carneros that I tasted—with a hint of Christmas candle spice. As with every wine festival, the longest lines are for wineries approved by Wine Spectator. Black Kite Cellars fills that role up here, and, yes, the 2010 Kite’s Rest Vineyard Pinot Noir ($45) is not particularly disappointing.

These nice people and their good Pinot Noir have put me in such a fine mood that, even though I’ve assiduously spit out every taste, as I amble back up the hill, munching on a plate of local smoked salmon, a Goldeneye terrace lounger turns to her partner and remarks, “People get so hammered at these events.”