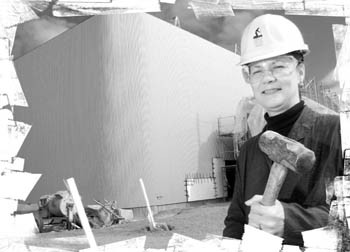 Hammer time: Daphne L. Derven, assistant director for programs and curator of food, at the site of Copia.

LOCATING the semi-complete $70 million American Center for Wine, Food & the Arts in Napa is a bit like looking for a hole-in-the-wall restaurant on the seamy side of town. The trek requires turning your back on the city’s freshly rejuvenated and bustling central hub and tooling along First Street away from Napa’s shiny downtown into a less exciting neighborhood, bordering on dilapidated, on the shallow banks of the dark Napa River.

On the left is an immense chained-off area where the torn ground is populated by a hulking army of construction equipment–as still as shadows on this quiet Sunday morning. At the back of the construction site is the beginning of a massive undulating-roofed building. It seems odd to think that this quiet road will become the gateway to the one-of-a-kind world-class wine, food, and arts mecca, slated to attract an estimated 300,000 visitors each year.

“Yeah, that’s it,” confirms a woman, in a noncommittal tone, working at the cut-price liquor store next door as she wheels a cart laden with cases of beer toward the shelf. “That’s Mondavi.”

And Mondavi it is.

The American Center for Wine, Food & the Arts (also known as Copia and named for the goddess of abundance) is the brainchild of Robert Mondavi, the venerable vino Granddaddy of the Napa Valley, and his wife, Margrit. Back in 1988, the pair envisioned creating a nonprofit cultural institution devoted to exploring the interrelationships of food, wine, and the arts, and their role in American culture.

Over the years, the idea for the center took root, attracting such key partners as the University of California at Davis, the Cornell University School of Restaurant and Hotel Management, and the American Institute of Wine and Food. It has since exploded into the ambitious concept Copia: The American Center for Wine, Food & the Arts.

The idea got off the ground in 1995 when Mondavi purchased 12 acres of land on the oxbow of the Napa River and donated it to the center for its new home. The weathly vintner also forked out $20 million to fund the project.

The following year a group of supporters drawn from around the Bay Area made substantial donations to help make Copia a reality.

Now both in their 80s, the Mondavis await the opening on Nov. 18 of their ambitious dream. But the events and programs will kick off this week in a big way.

A Feast Fit for a King, a March 31 benefit for the center, featuring the King Midas Banquet (named for the fabled king whose golden touch led him to starve to death), will attempt to re-create a sumptuous 2,700-year-old funerary feast believed to have been in honor of the legendary Midas when he finally kicked the golden bucket.

Dr. Patrick McGovern, an archeochemist with the University of Pennsylvania, has taken scrapings from vessels discovered in a tomb in Turkey thought to have been that of King Midas, and analyzed the contents so that chefs can replicate the traditional dishes.

“We are re-creating the meal eaten at the wake,” says Daphne Derven, the center’s assistant director for programs and curator of food. “We’re taking science and turning it into enjoyment and education.”

Of course, they will use a pinch of culinary creative license.

“We know that 2,700 years ago they had lamb and lentil stew, and there was saffron, which we are using to flavor the broth; plus we’re making dates stuffed with goat cheese–we’re not sure they did that exactly–but we know they had both those things,” explains Derven.

“We interpreted and created the dishes from what combinations were in each old vessel. It’s like putting together a jigsaw puzzle when you have no idea what the final picture is going to look like.”

For the Midas meal, Callinan will prepare a dessert using dried figs, muscat wine, and a panna cotta-style custard incorporating goat’s milk, which will be flavored with coriander and anise.

In addition, a Delaware-based brewery has come up with an interpretation of the unusual fermented beverage–a blend of wine, beer, and mead–found at the tomb.

“It’s a combination of grapes, grain, and honey,” explains Derven. The potent brew, aptly dubbed the Midas Touch, will be served at the banquet. McGovern will be on hand to describe the Turkish archeological discovery that led to the re-creation of the ancient dishes.

“This is exactly the kind of thing we’ll be doing when Copia opens,” adds Derven, of the Midas Banquet. When complete, the center will host an array of sensory-geared public programs, including seminars, lectures, culinary demonstrations, winetasting, and workshops.

WHEN completed, the American Market Cafe will serve as the center’s casual dining room, while Julia’s Kitchen will be the premier restaurant. Chef Dommen, who worked for two years at San Francisco’s four-star Fleur de Lys, among other gigs, intends to create the “freshest and finest” ingredient-based dishes, which will change regularly to reflect the center’s programming and the season.

“We will use some of Julia Child’s recipes, but more than that–we see her legacy as an ongoing exploration of food and flavor,” says Derven. “The restaurant will be more about the spirit of education than about a specific recipe.”

In addition, the center will feature more than 13,000 square feet of exhibition space, a 280-seat auditorium, an 80-seat demonstration kitchen, and a gift shop. Three and a half acres of working and decorative public gardens and a 500-seat outdoor concert terrace for live music and theater performances will grace the center’s grounds.

New York architect James Polshek is developing the 80,000-square-foot main building using native stone, metal, polished concrete, and large expanses of glass. And those with too much time on their hands can even monitor the project’s progress by logging onto a webcam at Copia’s website, which updates pictures of the construction site every 15 minutes.

Ultimately, Copia’s grandiose goals are as heady as the Midas Touch elixir that will help fund them. “Our mission is to explore food, wine, and art and to look at areas of intersection of the three,” concludes Derven.

“We’re the only institution in the world to be doing this.”