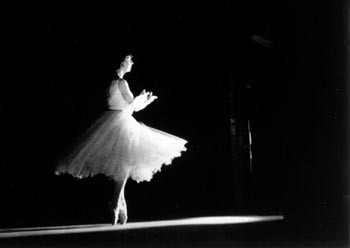 TODD Robinson’s Amargosa is a mesmerizing cinematic surprise, an offbeat, often-moving tale of a singularly odd woman. Marta Becket, age 76, is a semi-reclusive painter and ballet dancer who resides in a remote ghost town: Death Valley Junction, population 10, a slowly crumbling collection of shacks located at the edge of California’s Death Valley.

For decades, Becket has been out there in the middle of nowhere, performing inexplicable “dance-mime” shows for anyone willing to drive the necessary hundreds of miles. Her venue is the grandly named Amargosa Opera House, a once-deteriorating meeting hall that Becket named the Amargosa after the former mining town’s original name.

Crowds were scarce at first, so Becket painted her own audience on the interior walls of the theater. For no apparent reason, she painted them as Renaissance Italians. Filling the theater, these silent peasants and courtiers cavort merrily and watch the stage, beautifully crafted characters in an intricate al fresco fairy tale.

Amargosa, the movie, of course, is nothing if not a fairy tale. It’s a story of loss and redemption, in which an eccentric dreamer attempts to lose her demons in the desert and half-succeeds. It’s also an inspirational tale in which a lone soul bravely pursues her art for the sheer pleasure and blissful salvation of the artistic act.

If this were fiction–if Marta Becket were not a real person–then the whole oddball-in-the-desert scenario might seem like something dreamed up by David Lynch. Or Sam Shepard. But Becket is very much the real thing, and she has made quite a name for herself out there in the desert. The performances she continues to give–twice a week, every month from October to May–now sell out every show. The theater’s murals have made the building a candidate for landmark status.

Scenes of Becket toe-dancing on stage, sinewy and lithe despite her years, are intercut with segments that initially seem to have little to do with anything: Becket leading a midnight tour of the town’s “haunted” hotel; Tom Willet–Becket’s swaggering, semi-toothless stage-partner–tearing through the desert on his three-wheeled motorcycle or showing off a model train track he’s run through every room of an abandoned house; Becket feeding wild horses from her back porch, or weeping softly as she remembers her father’s disdain for her artistic inclinations, or firmly detailing her plans to be buried in the horse graveyard behind her house.

The film is poetically narrated by Mary McDonnell (Dances with Wolves), and intercut with lively interviews by such Amargosa fans as science-fiction writer Ray Bradbury. Indeed, it is Bradbury who sums up Becket’s importance when he says, putting the message of her life and work into words, “If you want to do something, don’t talk about it. For God’s sake, do it.”

In the end, the film, like Becket herself, is both whimsical and a little bit baffling–but, like Becket, it is also moving and quietly astounding.