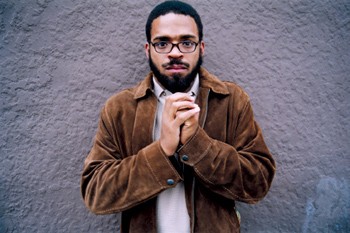 The mess around sound of self-definition

This is not another article about underground and indie hip-hop; however, it is a review of three unusual recent hip-hop releases, so I’m kind of obligated to talk about, you know, alternative hip-hop. Alt-hop? Yawn, zzzzzz. Conscious rap with a positive political message vs. gangsta mean and materialism bling? Yawn, yawn, zzzzzzzzz. Underground jazz poets and abstract DJ wizards vs. generic major-label teen hits? Yawn, yawn, yawn, zzzzzzzzzzzz.

Three recent discs run right over any boring separation of the popular and the authentic to simply fulfill hip-hop’s essential destiny to mess around with sound while making yourself profound.

Busdriver, ‘Fear of a Black Tangent’ (Mush) Busdriver is almost close to “normal” hip-hop, but he strives to be an oddball. On his third disc, Fear of a Black Tangent, this So-Cal MC sets his rhyme-o-meter in overdrive while resurrecting Frank Zappa, rapping with the rapid precision of a bebop saxophonist to grooves that are beat-based but all over the map. Formally, it’s basic beat-and-loop pop, but amidst the wackiness, there’s no sonic center other than Busdriver’s witty hyperactivity. His flow is elastic, and he raps so fast that you can often hear him inhale between verses.

His ironic, nerdy twist on Public Enemy’s planetary album title isn’t merely the beginning; rather, it points to complex identity issues and self-doubt. Busdriver feels torn over his lack of music-business success. He’s envious, but that won’t stop him from violating hip-hop’s playbook with tricks like sampling Joan Baez. “Why did I choose to do weird shit / I steered my career off a cliff in a flaming stunt car” he laments on one track, while sarcastically noting on another cut that “most likely I’ll sell more records in France.”

Busdriver’s outsider’s stance is amusing yet also confusing. But he finally makes it clear on “Lefty’s Lament” that he’s really against narrow-mindedness, mocking the standard warm and fuzzy sensitive-rap finale and casting the terms “underground” and “fascist” as limiting epithets alongside “towel-head” and “dirty hippie.”

Dälek, ‘Absence’ (Ipecac) Sounding different doesn’t necessarily mean your identity is strong. New York political rapper Dälek gets points for fearlessness; his MC/DJ/turntablist trio push the envelope on both of their potential audiences, irritating conscious hip-hoppers with their rock excess and confusing aggro-funk rockers with their riffless squall. Their new disc, Absence, fittingly recorded for rock extremist Mike Patton’s experimental label Ipecac, aims to sound like polemicist rapper Chuck D preaching over the layered guitar distortion of the band My Bloody Valentine, with song titles like “Asylum (Permanent Underclass)” and “Culture for Dollars” that imply the righteous topicality of Rage Against the Machine.

But however seemingly radical, Dälek plays with obvious stereotypes, settling for the assumption that industrial noise and well-trodden attacks on the status quo are a challenge. And Dälek’s flow is as uneventful and droning as the squall; if Busdriver raps like a bebop saxophonist, Dälek raps like a rock drummer who can only play in 4/4 time.

Buck 65, ‘This Right Here Is Buck 65’ (V2/Warner) Buck 65 may build his tracks with twangy rawhide and pedal-steel guitar, but he’s the real hip-hop deal. He’s comfortable knowing that being white and Canadian gives him zero street cred; in fact, it’s an authenticity that he carves like a piece of wood, and a funkiness pops out of his self-acceptance. If it sounds like his all-time favorite song is Kid Rock’s “Cowboy,” he’s really more of a peer, as his second domestic release This Right Here collects new cuts with indie import tracks dating back to 1998. And unlike Kid Rock, Buck 65 is content being a regular Joe.

Buck likes to remind listeners that he’s a hick, coloring his rhymes with words like “horses,” “old yellow dogs” and “ghost town,” never rushing his gravelly voice, boasting that he’s “got a little Johnny Cash in the old tape deck.” But he’s never a redneck, as his keen sympathetic storytelling skills reveal on portraits like “Cries a Girl” and the sad-dad tale “Roses and Bluejays.”

He even covers a Woody Guthrie song, “Talking Fishing Blues,” that sounds plain and folksy even in its shuffling ambiance. Is that hip-hop? It is reinvention and self-definition, and it is an accessible alternative. Whether hick, hip or hit, Buck 65 has the genuine disregard of hipster expectations that Busdriver and Dälek crave. “We need new inventions / That reveal people’s true intentions,” he muses, knowing that hip-hop’s openness is that very device.