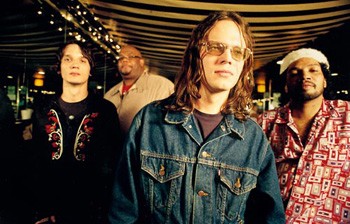 A roots-rock band you shouldn’t miss

‘If this were 1971,” the Los Angeles Times once opined in a review of the North Mississippi Allstars, “these gentlemen would be the biggest band in the world.”

Even in the derivative scene that is pop music circa 2005, the Allstars are hot stuff. Their rootsy rock is a fusion of Mississippi hill-country blues (as played by the likes of R. L. Burnside), alt-rock aesthetics and jam-band sensibilities–sort of like the Jon Spencer Blues Explosion with a whole lot more soulful country blues in the mix.

The core of the band, Luther and Cody Dickinson, are the sons of influential Memphis record producer Jim Dickinson, who has contributed his keyboard talents to everyone from Aretha Franklin to the Rolling Stones, and produced Big Star’s landmark 1974 power-pop album Third/Sister Lovers, among other notable discs (including recent CDs by Chuck Prophet).

Raised in northern Mississippi, the Dickinson brothers–who perform May 22 at the Mystic Theatre–have been involved in some darned fascinating projects of their own. Which is to say they’ve done their daddy proud.

Their 2000 debut, Shake Hands with Shorty, evoked the steamy juke joints that pepper the northern Mississippi countryside. The CD found the Allstars covering four songs by Mississippi Fred McDowell, three by Burnside and one by his Fat Possum label-mate Junior Kimbrough, a pivotal figure in the raucous blues style that has influenced the White Stripes, Jon Spencer and others. Comparisons to the Allman Brothers, Little Feat and even Cream are inevitable–and the brothers aren’t apologizing for that one bit.

Indeed, they returned in 2001 with 51 Phantom, which featured mostly originals and an even rootsier sound. That same year, the band teamed up with organist John Medeski of the jazz-fusion band Medeski, Martin and Wood, along with ball-of-fire pedal-steel player Robert Randolph to record the eponymous disc The Word, a gospel-inflected instrumental that was one of the highlights of the year’s roots-music scene. (As a group, the Word are scheduled to perform next month at the Bonnaroo Music and Arts Festival in Tennessee; no word on a follow-up album.)

They may not be the biggest band in the world, but the Allstars are living up to their reputation for innovative roots music that is setting the standard for modern blues.