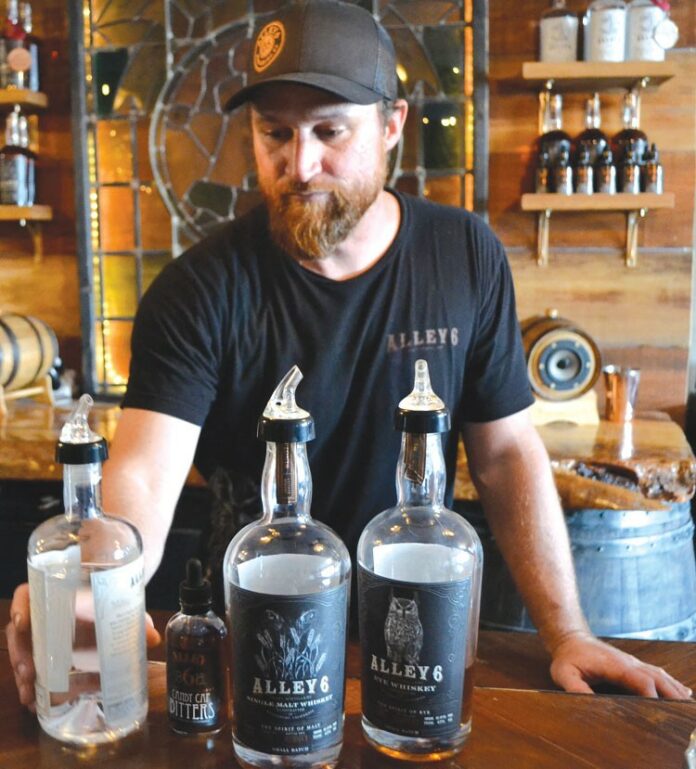 The craft-defying feats of Alley 6 distillery

When I drop by impromptu at Alley 6 Craft Distillery one weekday afternoon, it looks likely they aren’t open—or that I might disturb someone who’s hard at work—so I’m about to turn away after a minute or so when a sleepy-eyed Jason Jorgensen peeks out the door. Actually, he’d been having a nap.

If it sounds like he’s asking for trouble, à la moonshiner’s folly, it’s all part of the distiller’s long shift at work, Jorgensen explains in the tasting room, an unexpected little hideaway furnished like a cozy pub within this light industrial district northwest of downtown Healdsburg. Having already started a distillation of Viognier wine, which he and his wife, Krystle, use as a base for their bay laurel and wild-harvested fennel-infused Harvest gin ($40), he’s got a few hours to wait it out (while the spirit drips tediously into a collecting vat) in what he describes as a man-cave-style room upstairs until having to decide when he will cut the “tails” of the distillation.

If you’ve heard that a narrow cut in between “heads” and “tails” yields the purest product, the spirit in question may have been vodka. Where it concerns whiskey, says Jorgensen, he prefers to leave the tails rather long, as this more oily portion contributes mouthfeel and flavor.

So is that the secret to the Jorgensen’s Alley 6 rye whiskey ($50), which Bohemian staffers picked as their overall favorite in a tasting earlier this year? Or is it the 22 percent aromatic malted barley from Heidelberg, Germany, that also makes up 100 percent of their Alley 6 single malt whiskey ($60)? Could be those antiquey copper stills over there, manufactured in Portugal for the brandy trade—although other local craft distilleries use the very same design, with very different results.

The distiller’s hard-earned art is paramount, of course. And for the Jorgensens, there was that one dream trip to Scotland . . . and that two-day course in Colorado . . . “I like to say I went to the university of YouTube,” jokes the often-chuckling Jorgensen.

Surely the barrel regimen plays a role. Although the whiskey is aged in the same charred, new American oak barrels that’s required of all American whiskey bearing the name, some of the barrels in the Alley 6 cellar, a mere pantry compared to the most boutiquey of winery cellars, are as small as five gallons. Some say that’s a whiskey aging “trick.” I say it’s a delicious whiskey. Who wants to wait for whiskey this good?