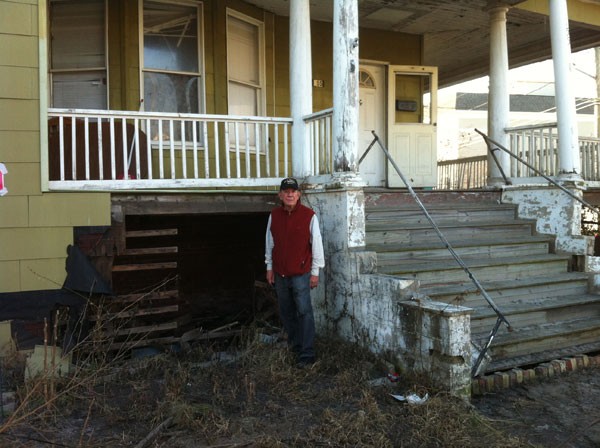 I went to New York last weekend to perform a wedding ceremony, and while I was there I figured I might as well go to one of the areas hardest hit by hurricane Sandy, the Far Rockaways. I’d been there in the summer, and I have a dear friend who lives there. When he went there to work, I went with him. We drove into the war zone from Manhattan, traffic snarled, troops wearing the colors of camouflage, an army of dump trucks, New York police directing drivers around mounds of refuse, gnarled fences, dead electrical wires down in the street, a sense of suspense hanging overhead.

At least the old sun warmed the polyglot neighbors sharing food and hope. The disaster brought out the saints, the criminals and city bureaucrats imposing rules on ornery citizens perched on the edge of the city working with volunteers to redeem their homes.

Here are some of the images in my head: the rosebush blighted in my friend Paul’s front yard, the garden soil sogged with oil and salt from the sea, the sound of a solitary bird singing in a bare tree, the air filled with the stench of garbage, a stray cat walking along the top of a sagging brick wall. In the gutted basement, drywall removed, Paul salvaged family heirlooms: his great grandfather’s record of military service in the Spanish American War and the water-soaked score for “Melodic Rag” in Eubie Blake’s own hand, and I wondered what rag Blake might play for the ravaged Far Rockaways on this Sunday.

We ambled along the mud-covered street to the sea, past the wrecked cars ready for the junkyard, past desolate houses, nearly everything broken that was built by humans. Past tattered American flags fluttering in the breeze, past two women wearing face masks against the stench and contamination, and on a wall these words handwritten: “We need never be hopeless, because we can never be irreparably broken.” I took nothing away with me, but it was a part of me now, inside forever.

Jonah Raskin grew up on Long Island, N.Y. He lives in Santa Rosa.

Buds in the Bunker