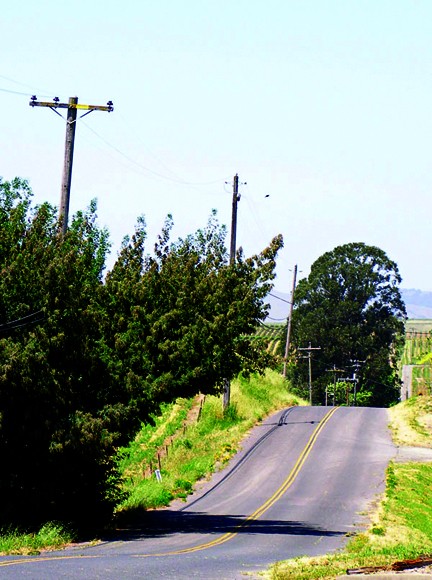 A taste of Carneros

There’s something desolate about the Carneros on the southern sweep of Napa and Sonoma. The rolling hills, dotted with run-down ranches, peter out at the edge of a vast, dun marsh. A Christina’s World, with grapes.

One day at the turn of the century, I drove down with a sampling crew to check grape sugars for an unnamed winery that contracted with a vineyard whose name I have long forgotten. Winding through green slopes of sameness, looking for our blocks, I marveled that the vineyard had set aside an area of tall grass and reeds. But the road around it was littered with shotgun shells. Seems that when the grape-eating birds congregated in the reeds, the vineyard crew, at their leisure, went boom, boom, boom.

I take it that things are different at nearby Acacia Vineyard, which has partnered with the Napa-Sonoma Marshes Wildlife Area, the California Department of Fish and Game and Ducks Unlimited to promote marsh restoration and wildlife habitat through sales of its 2009 Marsh Chardonnay ($25). Founded in 1979, and now owned by wine and booze giant Diageo, Acacia pumps out Carneros Pinot and Chardonnay on the props of 90-plus scores. Its biggest client is Costco, but the tasting room is a hole-in-the-wall in a drab beige facility swarming with more orange safety vests than a Caltrans pothole-filling party—except for the tasting room hostess, who must not be expecting a rowdy crowd.

I was lured here, firstly, by a varietal that wine-industry doyens have declared decidedly unsafe: Syrah. Acacia’s 2008 Kick Ranch Syrah ($45), from a Santa Rosa vineyard that Syrah faithfuls hold in high regard, has warm aromas of purple pigment, toast, and alluring blueberry fruit. Delicious, but get it while you can: it’s a one-off.

Secondly, I’m on a kick of my own with Carneros Pinot. Let’s say that I’m looking at a shelf of Pinot—Russian River, Sonoma Coast, etc. What can I expect, generally, from Carneros? Recent tastings have turned up a mixed bag, some bright with cherry fruit, others showing a remarkable similarity in dried berries, potpourri and sandalwood. What ties those together?

The 2010 Lone Tree Pinot Noir ($55) is more akin to a Russian River Valley, with chocolate, black cherry and spice, while the “a-ha” 2008 Beckstoffer Pinot Noir ($75) has a little of that Carneros incense, soapy, dried fruit and high-toned tannins. This vineyard, planted by Louis Martini in the 1960s, who lent his name to the Martini clone once widely planted in the Carneros, has since been ripped up. If this is the signature Carneros character, get it while you can before it’s strictly for the birds.