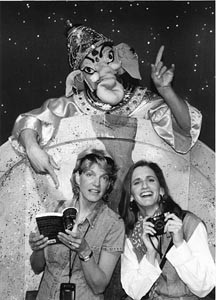 IT SETS UP like a blue routine in the Catskills: “Two WASPs are on an airplane going to India. On the wing, there’s this fat guy with an elephant’s head. . . .” But rest assured, Quicksilver II Theater Company’s production of Terrence McNally’s A Perfect Ganesh is a profoundly satisfying evening of theater.

Years prior to their travels, Katharine’s grown son died in a gay-bashing incident–a horror with which the grieving mother feels karmically associated because of her failure to accept her son’s homosexuality. In a rather radical act of atonement, while in India, she intends to kiss a leper.

Meanwhile, catty Margaret has discovered a lump in her breast–a frightening secret that she privately agonizes over.

Present throughout the women’s pilgrimage is the sagacious and gleefully rotund Ganesha (Ross Foti), the shape-shifting, elephant-headed Hindu god who has jurisdiction over all the obstacles and boons that confound or foster one’s earthly endeavors.

From the bustle of airports, midair turbulence, and train compartments to riverside chats with the elephantine deity, director Fontaine reveals his startling ability to transport an audience with the simplest of theatrical effects (watch for Aloysha Klebe’s clever light design when a porter pantomimes opening the Venetian blinds) and deliver them straight into the emotional heart of a scene. He keeps emotions pitched and the gags funny in this taut triumph of a production.

Lichenstein outdoes herself as the amiable chatterbox Katharine, a charming travel enthusiast with more pluck than a string section on a pizzicato jag. Lichenstein proves particularly adept at depicting Katharine’s maternal pains and the self-loathing that belies her otherwise effervescent character (the actress takes a tack that is wonderfully reminiscent of Kate Hepburn). The queasy notion that her son’s violent death was the outward manifestation of her own intolerance looms, while subtle symbols like a stream of lost luggage (qua emotional baggage) suggest that recovery is imminent.

Jorgensen turns in a rich performance as the comically sanctimonious Margaret–one could comb Sunday schools up and down the Eastern seaboard and not find a bigger prig. Like Katharine, Margaret is also a collection of microscopic transformations eventually leading to a revelatory end, a process Jorgensen deploys with subtlety and grace.

Evidently a man of a thousand faces (or at least as many costume changes), actor David Abad portrays innumerable porters, a couple of dead sons, a benumbed husband, and sundry other ancillary but important characters who provide dramatic ballast throughout the production. Early on, Abad is hilarious as an airport ticket officer whose droll humor rattles old-maidish Margaret. Abad’s most interesting character by far, however, is a gay doctor dying of AIDS who befriends Katharine on the adjoining balcony of their Indian suite. Abad proves that there are no small roles.

Quicksilver II’s A Perfect Ganesh is wonderful, cathartic theater in the very capable hands of a very capable company. Indeed, it is a trip worth taking.