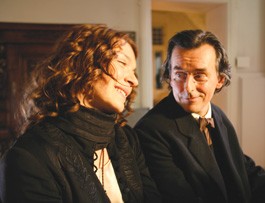 In reviving Percy Adlon’s Bagdad Cafe, the 24th annual Napa Sonoma Wine Country Film Festival has become the festival that says, “Yes, fat chicks!” The fest’s schedule isn’t quite solid yet, but we know where it is, so that’s a plus. It takes place over two counties and at locations as different as Round Pond Winery and the jewel-box-like Cameo Theater in St. Helena.

Director Adlon and his gemültlich, plus-sized Dietrich, Marianne Sagebrecht, cut a brief but memorable heyday in the mid-1980s. For a time, Adlon was German comedy, considered an oxymoron in those years between the Big War and the 1980s. Nineteen eighty-eight’s Bagdad Cafe is a fondly remembered film. The large and lovely Sagebrecht plays a hausfrau looking for Disneyland, stranded in the Mojave on what’s left of Route 66. There, she encounters a courtly cowboy (Jack Palance in a rare gentleman role) and a derelict cafe that needs a cook.

Adlon’s 1991 Salmonberries is set in Alaska, with K. D. Lang. It’s a similarly dry aquarium full of fish out of water; one remembers most the beguiling stained-glass effect of the sun coming through jars of pinkish-orange berry preserves. The film established Adlon as a wanderer and explorer, a bemused, comic version of Werner Herzog.

Adlon and his son Felix are bringing their newest film, Mahler on the Couch, to the festival this year (Sept. 18 and 25). Here, the composer seeks out the aid of Freud as he tries to put his Bauhaus in order. The problem: Mahler’s straying wife, Alma (cue Tom Lehrer’s song of the same name).

The NSWCFF promotes both indoor and outdoor films, specializing in sunset movies in the cool of the evening in the vineyards. One of the draws is Ben Affleck’s Southie crime drama The Town (Sept. 15), which pits John Hamm and wily Boston bank robber Affleck against a miasma of Catholic guilt. (Speaking of C.G., Martin Sheen and son Emilio Estevez are signed up for closing night on Sept. 26.)

There’s a sharp and tangy left-wing counterpoint to the faux-chateau ambiance. The Balibo Conspiracy, aka Balibo (Sept. 19), starring Anthony LaPaglia, is introduced by SSU professor Peter Phillips of Project Censored fame. If you were Australian, you’d know about this atrocity: the Kopassus (Indonesian Green Berets) took care of a quintet of Australian TV journalists in 1975 as they recorded the fighting in East Timor.

Our electorate may be confused as to where Timor is, let alone East Timor, but the event is now being investigated as a war crime. One potential witness (as per Mr. Hitchens’ book on the subject of the man’s many misdeeds) is Henry Kissinger, whose machinations helped the Timorese invasion take place.

Most liquefying, even in preview form, is The People Speak (date TBA), a sort of a film version of Howard Zinn’s People’s History of America. It’s an all-star cast in staged dramatic readings from some of Zinn’s gathered voices, including Bob Dylan (hopefully intelligible for the occasion). Speaking of poets, laureate Robert Haas will be on hand for a reading in front of John H. Healey’s documentary on Gary Snyder, The Practice of the Wild (Sept. 20).

The wine on hand at all venues, “bottled poetry” like the billboard says, should take the rough edges off some of the more haphazard indie films that inevitably turn up for such occasions.