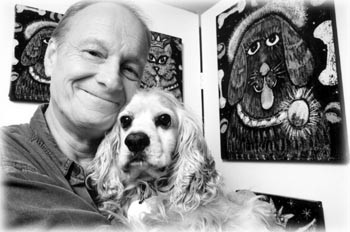 Dog days of autumn: Zak Zaikine and his canine companion pose before one of the artist’s angelic pet portraits.

I’M SORRY that you’re late,” calls artist Zak Zaikine standing in his Sebastopol driveway as I pull the car in, rolling down my window. Only five minutes tardy and I’m sorry too, becoming sorrier by the second as Zaikine explains that he tried to keep one of his collectors, musician Tom Waits, engaged just a bit longer so that I could meet him. “Do you mean in that old Cadillac that just pulled out?” I ask weakly.

Zaikine smiles and nods and leads the way into his house, past hollowed-out rocks adorned with floating jasmine sprigs, past old tools, outdoor shoes, and lawn sculpture, into a kitchen arrayed with colorfully painted platters, whimsical iron work, paintings of haloed dogs, a plate of cookies, and warmed cider in the kettle. I resolve never to leave.

Seated in his kitchen nook, Zaikine continues to talk. Continues, because Zaikine hasn’t stopped. Exhibiting in the ARTrails open-studio tour, Zaikine is a talker, a storyteller, a man whose rich connection with people and beauty has etched his face. “I think that because I love what I do, and people really love me–and I know that because I love them–I’m very lucky,” he says, pouring steaming cider in a cup.

Later, tears flow silently down his face as he describes selling his beloved home in upstate New York before moving to California more than 20 years ago. “Because the house was very special, I made it almost womblike,” Zaikine remembers, recounting realtors’ exasperation when he would turn down offers based on personal dislike of the buyers. The realtors would ask, “‘Don’t you want to sell the house?'” Zaikine chuckles, “And I said, ‘No, not to them.’

“And then one day, this incredible man came to my home,” Zaikine goes on. “He was so gracious, and just so magical. The way he moved, and the way he looked, he was so gentle. You could see that he had just recovered from an illness. He said, ‘Would you give me the honor of allowing me to live in your space?’ and I said, ‘Wow. Well, sure, take it,'” Zaikine laughs.

Zaikine eventually pressed upon the buyer all that he admired: table, chairs, paintings–even his car, a custom-built Buick Riviera. “It turned out,” Zaikine says, smiling and wiping a cheek, “to be [choreographer] Paul Taylor. Anyway, when I went with him to the Motor Vehicles Department, his best friend was there. It was [playwright] Edward Albee. I’ve just had that kind of a life.”

“That kind of a life” might be expected to start with more silver in the spoon. Raised by poor Russian immigrant parents, his father a muralist, Zaikine, now 56, lost them both before he was 14. He put himself through the Pratt Institute delivering newspapers, pumping gas, and working for Pan Am.

Modeling himself on the well-rounded aesthetic of Picasso, Zaikine welds iron; paints on anything that doesn’t move; sculpts; and makes ceramics. “Most artists do a lot of things,” he says, “but there is one focal point that they concentrate on, maybe because they weren’t given permission to do more, or maybe some critic said, ‘Well, his watercolors aren’t very good.’ To tell you the truth, if I had an opportunity to have something by Rodin, it would be his watercolors–the most beautiful things you’ve ever seen: the full blossom of his women comes out.”

Working in bright colors with sometimes zany images, Zaikine often gives his work the collective title of “That Joyous Feeling,” a bliss-drip that comes off the man himself. “If you can do something well, and everyone can–I don’t think that there’s anything wrong with being in bliss, all the time,” he says. “You really aren’t going to be creating masterpieces every single moment, but you will be in a place where you can learn something else.”

Working in many different media helps Zaikine to remain in that learning place. “It sounds easier than what it’s like, but you can establish the parameters,” he says. ” I can’t tell you how to make a million dollars until I’ve made two. And the same thing comes with painting. When I’ve done workshops, people come up to me and say, ‘I want to know how you did that,’ and I say, ‘Do you really want to know how I did it, or shall we talk about what you want? Everyone’s got a technique, but let’s find out who you really are.’ Let’s find that soul,” he smiles, “and connect to that.”