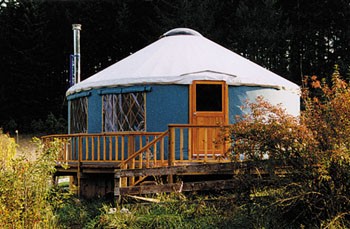 Yurt Place or Mine

Nomads for the new millennium

I first encountered the Central Asian structure known as the yurt (ger in Mongolian) while visiting Kazakhstan 12 years ago. Stooping to enter through the carved and painted wooden door, the dimly lit interior was pungent with the odors of damp animal hair, smoke, and spices. The Kazakh family alighted on pillows and oriental carpets spread on the tamped earth, their possessions neatly stored in wooden chests around the perimeter. In the middle, a platter of steaming pilaf awaited sharing.

Akin to a teepee, a kiva of the Southwest, an igloo, or a Massai thatched hut, the yurt has something familiar about its archetypal circular form–the primal sphere reflecting the 360-degree horizon, the cycles of seasons, the spiral path of consciousness. Indeed, it was like coming home, and I imagined that one day I’d live in one.

Now one of these circles is my home. It was erected three years ago with the help of friends on land overlooking the Pacific Ocean. Though the underlying architectural structure of this tent/cabin/pagoda is identical to its native predecessor–the framework consists of wooden rafters spanning from expandable lattice walls to a central pressure ring–Kazakh and Mongolian nomads would hardly recognize this up-scale progeny. Where the traditional yurt is swathed in sheets of felt made from pressed animal hair (not skins), mine is covered with laminated canvas punctuated with vinyl windows, wooden doors, and is crowned with an acrylic dome skylight.

On the outskirts of Bodega, weaver and fiber artist Ed (many yurt owners lack permits; last names are omitted to protect their privacy) erected a 20-foot yurt among his apple trees to use as his studio. “Besides being economical,” Ed said, “the main reason I chose a yurt was because I wasn’t sure how long I’d be staying here, and if I were to move, I could pack it up and take the studio with me.”

In hindsight Ed said he would have bought a larger, 30-foot yurt, and the only big problem is that on hot days it’s too warm inside. Though temperate regions such as Northern California, particularly near the coast, are ideal for yurts, on those rare hot days they can become giant porta-ovens. And even with the optional insulation liner, the occasional subfreezing temperatures require keeping the wood-burning stove stoked.

For decades back-to-the-land types have created their own yurts from scratch. Now several companies in the USA are dedicated yurt makers. Depending on the size–typically between 16 and 30 feet–and various options (extra windows, French doors, high walls, insulation liners, opening skylights), a yurt can cost between $1,400 to $7,000. Highly reputable and longest in the field is Pacific Yurts Inc. in Oregon, who sell between 300 and 400 a year.

Fast gaining ground since it began operations eight years ago is Nesting Bird Yurt Company out of Washington state. President Jody Locklear estimates that a total of about 1,000 to 1,500 yurts are sold annually in the United States and that Nesting Bird’s sales have doubled annually for the last four years.

“There are several reasons for the surge of interest in yurts,” Locklear surmises. “Particularly among baby boomers, there’s a trend towards simplifying life. Those wanting a weekend getaway or a significant alternative home in a quiet place might choose a yurt because of the portability factor and its low environmental impact. And yurts are no longer simply an off-the-grid tent. Upscale ones have hard-wood floors, stone hearths, lofts, and full kitchens that appeal to someone unwilling to sacrifice creature comforts.”

Though yurt life hints of a perpetual camp-out, my thoroughly modern yurt with pine-paneled floor is wired with electricity, phone, and hot water; my kitchen is equipped with sink, under-the-counter refrigerator, and a two-burner propane stove; and my bathroom boasts a glass shower, sink, and composting toilet. And even on the frostiest winter nights, it’s warm and cozy with a wood-burning stove.

Like myself, many people in the North Bay have chosen yurts as their primary residence. Wishing to become independent of the rent scene, 10 years ago Jackie Screechfield moved to a meadow in west Sonoma and created an 18-foot yurt. “I read books on yurt making and got blueprints from a woman in Bodega that had a small yurt-making business. I sewed my first yurt on a Singer sewing machine and broke lots of needles!”

She lived in the yurt for three years, birthed two children there, and later built a new 22-foot structure. When friends began requesting yurts, she bought an industrial machine and now creates custom yurts and also consults with those wishing to make their own. Though they lack the fine finish of the larger manufacturers, each is unique and runs at about half the cost.

It’s impossible to estimate the number of yurts dotting the hills and valleys of the North Bay, but it’s easily in the hundreds. Though yurts are structurally sound, can withstand 120-mile-an-hour gales, and are earthquake-proof, obtaining a permit for one still varies in California from county to county. Typically, they are granted on a case-by-case basis and allowed for nonhabitable purposes such as studios, offices, or recreational structures. Napa and Mendocino have granted permits for housing, though Marin does not allow yurts as permanent living spaces.

When I called the Sonoma County Permit and Resource Department, the man I spoke to was entirely ignorant of yurts and claimed (mistakenly) that they’ve never given out permits for them. Despite the laws, a large percentage of yurt dwellers, particularly in remote regions living off the grid, brush off the formalities of codes altogether and live in yurts anyway.

When Robert and Marcie began constructing their dream home in Marin in 1999, they bought a yurt and set it up on their land. It was permitted as a storage building, but their three children used it as a bedroom. The 20-foot yurt, permit, concrete platform, and sun deck cost them a total of about $10,000.

When it came time for Barbara to erect her 24-foot yurt among the redwoods in western Sonoma County, she put out a call to friends for a Northern California version of a barn-raising party. “It was really wonderful to have all this communal support to help create my new home,” she recalls. “A caterer friend’s contribution was a wonderful meal that we shared afterwards.” (One person said, “Only in California could a person have two conflicting invites on the same weekend for a yurt-raising party!”)

The circular deck had been constructed beforehand, and the yurt was fully erected within four or five hours. (Though over a dozen people helped out, only four or five people are needed.) Barbara now uses her 24-foot, high-wall (7-foot tall) yurt as a living room, office, guest room, and a meeting space for her women’s group.

“Being a circle it’s very womblike, centered, and grounding. When you look up at the spokes of the rafter, it’s like living inside a medicine wheel, a mandala, or a sand painting,” Barbara shared. “People love the space, and a couple friends have reported having special experiences. I had a gathering and my friend sat in the center and had this incredible experience of oneness and well-being. The very shape of it may actually draw in energy.”

What Jackie says she loves about yurt life is that with the thinner barrier delineating inside and outside, nature becomes more intimate. “Inside my yurt, I’m totally aware of what’s happening around me. Every rain drop, the sun moving through the seasons, the moon, the birds. . . . And when you sit in the center and sing, play an instrument, or chant, the sound rebounds back to you and creates a special resonance.”