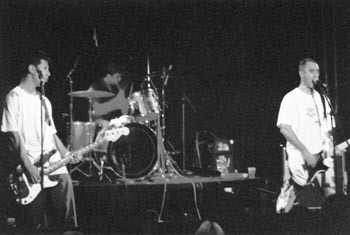 Punk with a purpose: Staying true to their musical mission, the Toronto-born brothers of Youth Brigade play on Monday, July 10, at the Inn of the Beginning.

IF YOU’VE BEEN wondering what happened to all the ’80s punk bands that cared, you might want to check out the Youth Brigade tour as it swings through Sonoma County with the Swingin’ Utters. Youth Brigade (“youth is a state of mind”) continue to churn out titles like “Believe in Something” and “Care,” with punkish insistence on the individual’s “responsibility to change what they feel is wrong with the world.”

Since 1982, when the band started its record label BYO (Better Youth Organization) Records, the musicians have been taking a stand against everything from big corporations to big bombs.

In the band’s heyday, back in 1982-85, Youth Brigade filmed docu-paeans to punk culture and did the punk-chic broken-down-bus-tour thing, with all the attendant horror-show experiences: blitzkrieging skinheads, shows cut short by outbreaks of violence, drink fests, sleepless nights, and grueling schedules.

When Youth Brigade reassembled in the early ’90s, they were singing lyrics like “Violence doesn’t make any sense.” Yet they carried the main punk ideals into their 1994 comeback album To Sell the Truth.

Of course, for Youth Brigade, most albums have been “comeback” albums. The Southern California band’s history is pockmarked with breakups (or fizzle-outs), in which the band’s Toronto-born brothers–Shawn, Mark, and Adam Stern–separated and reunited in various combinations. Recent incarnations toured California to sell-out crowds in clubs like San Francisco’s Trocadero.

Through all the turmoil, the BYO record label has been the ever-progressing tortoise, steadily growing while giving voice to bands like 7 Seconds and Pinhead Circus. The label’s latest hot concept is the “split album,” in which two bands contribute cuts–six of one, half a dozen of the other–to one CD.

As in the early days, the current tour is a close-knit punk-family affair, this time in celebration of BYO’s latest release, Split Series Vol. II, featuring cohabitants Youth Brigade and Swingin’ Utters (whose happy punk ditty “Angels Pissin’ on Your Head” is an utter gem).

As to Brigade’s newer sound, the lead vocals are gruffer, but the lines more melodic. Grating string abuse and fibrillating chord slam are still the heartbeat of the music, but lyrics in songs like “Where Are All the Old Men’s Bars?” grouse about yuppies, almost in echo of a ’97 review calling Youth Brigade “punk’s grumpy old men.”

Modern cowboys: Beautiful anger is the name of the game when the Swingin’ Utters open for the Youth Brigade’s Sonoma County show.

It also seems the band is broadening its palette: the reggae sprinkled sparsely through ’96’s “Believe in Something” has erupted full-on in Split 2’s “Let Them Know.”

If its old Troc shows are any indication, the band is likely to play material from all its incarnations. Youth Brigade’s anthemlike hooks and protest-march chants bring out the best in an audience– mob action and massive shout-alongs.

To grow yet maintain integrity over decades is no small feat in punkdom. It made one reviewer observe, “Something deep inside must fuel them.” Shawn Stern himself has said, “I don’t believe music is entertainment; it goes way beyond that.” It goes to ideals and activism and a good, rowdy ear screwing.