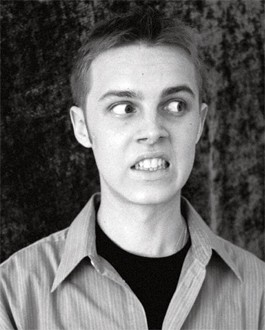 He enrolled at the San Francisco Comedy College in July, produced his first standup show in September and expects to fill the 500-seat Person Theater next week. Santa Rosa native David Studebaker is moving fast.

Just 19 and a product of area schools, kindergarten through the JC, Studebaker sets some of his routine in his hometown, describing the overly intimate atmosphere at his workout club, the Santa Rosa Family YMCA, where the older male athletes spend a good portion of their time naked, evidently cradling themselves and discussing the superior qualities of homemade casseroles. Studebaker knows plenty about family and old men; he still lives at home, a disconnect that doesn’t bother him at all.

“It’s kind of a weird juxtaposition,” Studebaker admits, caught by cell phone as he prepares for an evening gig in Alameda. “I’ll go to San Francisco and perform and then drive home, and I’m still living upstairs in my parent’s house. People expect that if I’m doing standup full-time, that my life outside the stage is really wild, and that’s really funny to me. It’s actually been a huge help to me because I haven’t had to worry about getting a day job, and it’s also allowed me to focus on producing, which is the other aspect of the engine of my quick success.”

Studebaker has always been the funny one in his family but didn’t really get the standup bug until he was 15, when his aunt and uncle sneaked him into the Punchline to see Bobby Slayton. “He’s like the pit bull of comedy,” Studebaker explains. “We sat in the front row, and he spent the entire show just railing on me. I loved it.”

In addition to his own act, Studebaker produces the Young Guns of Comedy, a group standup show that features up-and-comer Ali Mafi, who is poised to have his own TV special this June. “Ali is gay and Muslim,” Studebaker explains, “which is a hilarious combination. All the comedians in the show are fantastic. We’re all 26 and under, we’re all young.”

Having been writing, performing, producing and studying his craft full-time since last summer, Studebaker has about 30 minutes of original material. He aims to have a full hour-long act done by next fall. After that, watch out, Jon Stewart.