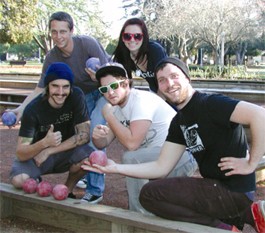 A quick count shows that there are four Napa Valley wineries with bocce courts; Sonoma County has 10. Graton’s Underwood Bar and Bistro has one out back, and more are being built all the time. Based on a game popular since the Roman Empire and variously known as boules or bowls, bocce is not a sport that rewards athleticism or strength; it can be played by those confined to wheelchairs, and it emphatically improves in disposition when accompanied by wine.

In the North Bay, St. Helena (population 6,000) holds the title of the largest and most contentious area bocce league, with almost a sixth of the citizenry competing on 89 teams. The St. Helena Star posts the weekly scores, and when musician and bocce ball commissioner John Kelly passed away last December, the paper vigorously related his history of fairness and attention to detail in a league regularly fraught with argument.

Now video producer and web designer Robert Battaile is poised to step gingerly into the mix, working with the city of Santa Rosa to begin a league in that city’s Juilliard and DeMeo parks with an eye to expanding to other civic properties. With one information session completed and another one slated for March 7, Battaile already has some 10 to 12 teams lined up and ready to play in a three-night-a-week spring league stretching April to mid-June. A fall league is also planned. Players are encouraged to bring wine in nonglass containers and potluck dishes to share. “Bocce’s important,” Battaile chuckles, “but so is the wine and food.” He adds, “A lot of people actually get better when they drink.”

While competition on the oyster bed “field” appropriate for bocce might be fierce, it is nothing if not a friendly game, with a near Zen quality to it. “Bocce’s the kind of game that takes 10 minutes to learn,” Battaile says, “and a lifetime to master.”