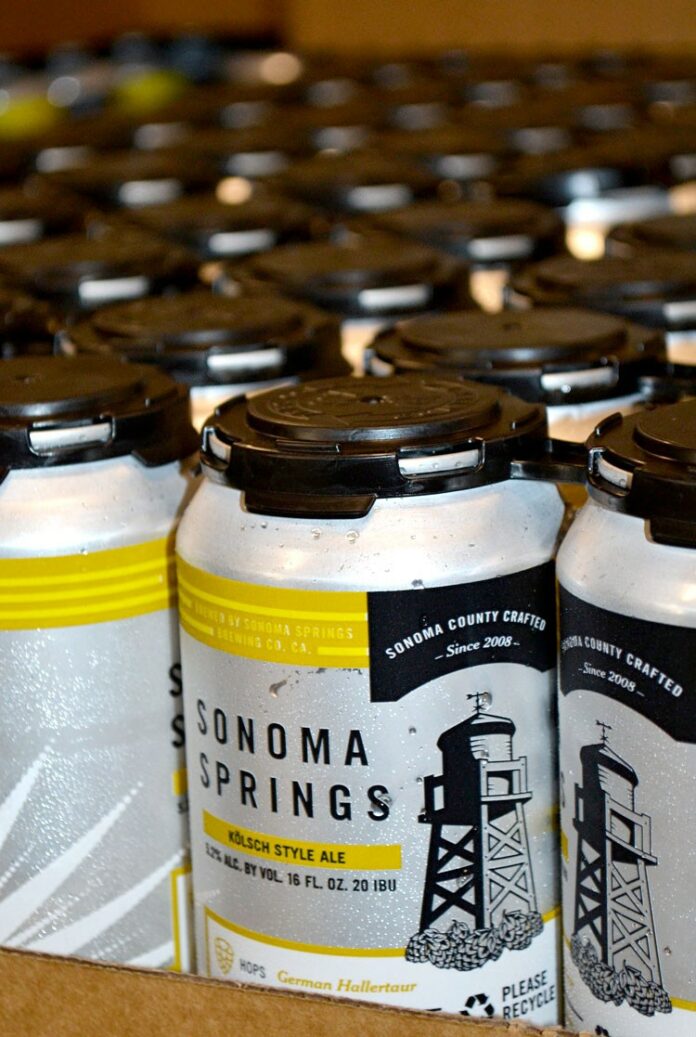 The only thing I wanted to know about beer in a can when I showed up to witness Sonoma Springs Brewing Company’s inaugural canning session was, how do they put the beer in the can without it foaming all over the place? Right away I got my answer: the beer foams all over the place.

That’s a feature, not a flaw, of the process, says canning-line operator Adam Satrom. The carbon dioxide in the frothy brew helps to push out any remaining oxygen while the lids are fastened to the cans. It’s all about keeping the DO—dissolved oxygen—out of the can, chimes in another member of the five-dude crew from the Can Van, a mobile canning service founded by two women as a college project. The Can Van is now in constant demand up and down the West Coast as breweries like Sonoma Springs turn to pint-sized aluminum cans to put their flagship beers on the market.

Even then, a little bit of that DO does find its way into the can. “Our target range is 20 to 40 parts per billion,” says Satrom. “If you have a drop of air, there goes your parts per billion.” Oxygen is the enemy of beer, or more to the point, of beer freshness. Hop aromas are particularly vulnerable to oxidation over a short period of time.

For what seems like the longest time, glass was class, and the 22-ounce “bomber” a symbol of cool, quality craft beer in contrast to the derisory epithet “six-pack” that affixed to mass-market aluminum beer packaging. So what, exactly, is going on—is this a “green” packaging thing? Not necessarily. It all goes back to the DO.

Although glass is bottled under counterpressure and less oxygen gets into the bottle at first, the caps somehow let in about one part per billion per day. Over time, the bottle loses its advantage, making the can a worthy vessel for the mildly hopped Sonoma Springs kölsch-style ale. Tasted on bottling day and three weeks later, it held up well. Not a wetter, weaker pale ale, like some microbrew kölsch, it’s actually more like a nicely bittered, spot-on version of American-style lager produced by mega-breweries, just so much fresher, a little grainier and locally made by master brewer and founder Tim Goeppinger.

The brewery’s newest can release, available April 28, is a New England–style IPA called Juicy in the Sky. Meanwhile, Sonoma Springs signatures like the sweet and spicy Roggenbier Bavarian rye are available at the taproom.