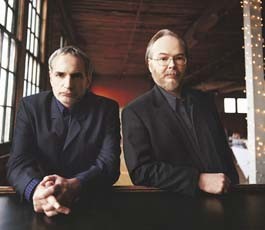 Who else but Steely Dan could marry a strap-on to the perils of great Ulysses?

Lured West to play that irresistibly overflowing dosh-bash known as a Las Vegas private party, Steely Dan strangely enough end their national summer tour in Santa Rosa. Or perhaps not so strangely. I last saw them at the Mid State Fair, working outside in the fading 110-degree Paso Robles heat. This is a gig they reprised last month, so it’s probably safe to note that the once elusive duo known only as a studio band are now more used to crowds. Of course, one of the great things about the Wells Fargo Center is that “crowds” becomes a less explicit word in its 1,600 seat confines.

According to Wells Fargo Center director of programming Rick Bartalini, Dan fans have been making special requests with their tickets and none of them has anything to do with being close to the stage. Rather, it’s about finding that spot in the intimate hall where the sound hits sweetest. Naturally, those seats near the mixing board are way sold-out.

A Steely Dan show can have an air of mystery to it. Will they play even one hit or will they stick to the music that’s most currently interesting to them to the exclusion of all else, as they did at the Shoreline Amphitheater some years ago? Will the frighteningly intelligent Donald Fagen deign to speak or will he just hunker down grumpily over his keyboards, pissed to be in the sticks? And please no, no please no, will Walter Becker please not be allowed to do a song from his solo career? (Alas, he has a new solo disc.)

I’ve seen ’em do it every way, though the Mid State gig, interrupted as it was by carnival sounds and amateurish fireworks from the surrounding fair, was curiously the most satisfying. With a full horn section led by the late Cornelius Bumpus and with a complement of gorgeous women singing backup so hot that it was the audio equivalent of the sway and give of unbridled breasts in a red silk shirt, Fagen and Becker gave the audience every hit. And there are a lot of them.

Night of the Living Dan

As hyped-up Hollywood showcase gigs go, this one in early 1972 was relatively low-key. For one thing, it was held at the Whiskey a Go Go and not the newer and trendier Roxy a little way up the Sunset Strip. For another, the invitation list somehow included the manager of a student-run radio station at a small college across town.

Never one to admire a given horse’s dentistry, I was happily sitting at the front of the modest club’s small balcony when the lights came down and the sounds of musicians settling into place curled out from behind the slightly frayed curtain. It rose as the drummer ticked off a beat and a stuttering guitar lick led the band into their opening number. Arrayed across the triangular stage, nearly obscuring the drummer at the back, was a front line of five musicians, including a tall, dour-faced keyboardist standing at the far right.

As the first song’s chorus came around, the earnest lead singer was suddenly, gloriously surrounded by a wave of ringing voices as the full front five leaned into their microphones and filled the room with crisp harmonies. “Are you reelin’ in the years?” they demanded. “Are you gatherin’ up the tears? Have you had enough of mine?”

Those rhetorical musical questions, of course, remain unanswered. But there was no doubt, as the set unfurled, that this new band—with its odd mixture of pop hooks and complex song structures, wry, inscrutable lyrics and the slightly salacious in-joke name—was a crack performing unit. But no sooner had their debut album Can’t Buy a Thrill scaled the charts than the supporting tour took its toll and the downsizing of the Dan began, with singer David Palmer the first to depart. (He re-emerged later with the worthy but overlooked Southern California band Wha-Koo.)

Steely Dan were a quintet for the 1973 Countdown to Ecstasy LP and tour, after which Jeff “Skunk” Baxter moved on to the Doobie Brothers, and from 1974’s Pretzel Logic on, the “band” existed only as a studio collaboration directed by the famously exacting songwriting team of Donald Fagen and Walter Becker.

Twenty-plus years after that memorable debut, the Dan duo regrouped and emerged from their self-imposed performing exile with a pair of summer tours that yielded Alive in America, the group’s only official live recording. And there (despite a hoot of a Howl- inspired rant about the trials of their prior tour experiences in the CD booklet) it was clear that seven albums and a full generation later, Steely Dan were once again a crack live ensemble, still reelin’ in the years.

And Get Out of Here

High school jazz band, 1991. It had been 15 years since Steely Dan were cool, which was eons to us but was like yesterday to our band teacher. He was always valiantly aiming for us to be the high school that played “cool” music, so there we were, stuck playing Steely Dan.

As the bass player, I should have relished the bass lines to “Black Cow” and “Peg,” since both consist of flashy, gargantuan anchors for the indomitably polished tunes on the surface. But at 15, my bullshit meter went off. The songs weren’t “cool.” They used too many major seventh chords and ninth chords and something wanky called a “mu major” chord. They reeked of cocaine and polyester excess and icky sex parties thrown by people who don’t know how gross they look. They were the soundtrack to Amway and EST and Mind Dynamics and a whole lotta other crap our parents were once into.

Steely Dan may not have been the birth of smooth jazz, but they were certainly its midwife into the world of commercial success, and if that’s not enough to send them to the musical gallows, then I don’t know what is. It’s harsh, I know. But Becker and Fagen are used to people dissing them. After all, aren’t the liner notes to Aja just about what a couple of assholes they are?

Drugs in the Cabin

During a visit to London in 1998, my friends took me to the Bug Bar, a Brixton pub in the basement of an old church. With its dark atmosphere and intimidatingly cool clientele, the place was like a scene from a movie. The dance floor was packed. The DJ rotated among Michael Jackson, Prince and New Order when, suddenly, with the flick of a needle, he mixed it up. The sweet opening strains of “Peg,” one of Steely Dan’s greatest tunes, swept across the dance floor. Nobody stopped. Nobody laughed. The hipsters kept dancing. It was a completely un-ironic gesture. And it was something that I’d never before experienced in my punk-rock-steeped cultural life.

When I returned home, I found a copy of Aja on vinyl and listened to it endlessly, enamored with the smoothness, the musical virtuosity and the lyrical enigmas. What is Donald Fagen really singing about when he says, “Then the shutter falls / You see it all in 3-D / It’s your favorite foreign movie”? The song gained even more cachet for me after I became obsessed with Michael McDonald, the world’s greatest backup singer, and during an intense Steely Dan listening session, discovered that, indeed, he had sung the fabulous backup vocals on the chorus to my new favorite song.

Of course, there is an element to the music that brings to mind sleek sailing yachts, wide-framed sunglasses, cool linen against a thigh, a white wine spritzer held in a manicured hand. Drugs in the cabin. But I love this element as much as the music itself. It’s like going into a time warp, one where the music was smooth and the lyrics were important.

Can Buy a Thrill

Steely Dan reminds me of Alice Cooper. Along with such classic rock acts as Elton John, Deep Purple, Jackson Brown, Yes and Lynyrd Skynyrd, Dan and Cooper have been the subjects of a recent obsessive consumer binge of mine. Not satisfied with mere best-of discs, I’ve instead wrestled with the entire ’70s output of these acts. This has often been a poor choice. Cooper, John and Purple recorded terrific hits, but their album filler is largely outdated. Browne has powerful content but stiff production, while Yes remain sonically bracing but feature irrelevant content. Skynyrd’s great discs are tasty and substantial but clouded by the stigma of flag-waving red-neckism.

But the tasty and substantial Steely Dan catalogue carries no such stigma, no outdated production, no filler. In fact, their albums are almost too fresh and perfect, pulling off a weird, rare miracle of squeezing complexity from compromise. Their boogie-rock beats actually swing, the knotty guitar lines work like easy hooks, the arty jazz-fusion chords are sweet to follow and the obtuse lyrical allusions are full of candy.

Often, the thrills are lesser tracks, like Countdown to Ecstasy‘s “Pearl of the Quarter,” where a timid pedal-steel guitar almost evokes a modern alt-country band trying to ape ’70s-era Steely Dan. It’s not all feel-good oldies, though; Steely Dan had some ill-defined thing for the homeless, from the scary track “Charlie Freak” to lyrics like “While your poor people sleeping / All the stars come out at night,” from the cut “Show Biz Kids.”

Mind you, to soothe a true classic-rock jones, I’ll take Alice Cooper’s single hits “I’m Eighteen” and “Be My Lover” over any Steely Dan hit any day. But the holistic completeness of Steely Dan’s albums reminds me that I’m done with Cooper’s albums.

Tunesmiths Donald Fagen and Walter Becker have been chart-topping rockers for close to 40 years now. Since the drollmeisters will soon be laying down their smooth ironies here, it’s long overdue to thrust beyond merely cataloguing their many hits and spats or ruminating over some arcane lyric’s meaning.