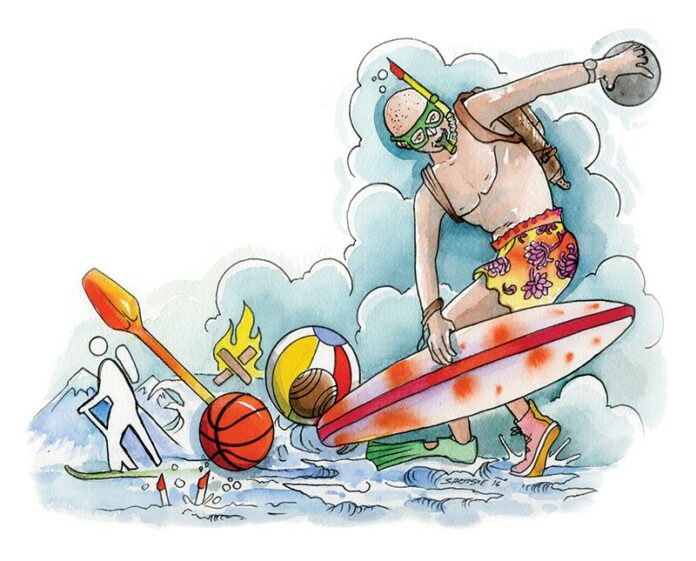 Best Way to Orient Yourself Without a Compass

It’s obvious that we live in one of the most beautiful natural regions in the world, from Armstrong Woods to the Sonoma Coast to the rolling hills of wine country. With all this abundance, it can be difficult to know where to start your explorations.

The team of dedicated and creative ecologists behind Bioregional Orientation is here for you. Leading monthly walks and workshops, with an emphasis on observing, identifying and mapping, Bioregional Orientation also aims to inspire the public to engage with their surrounding landscape and develop a sense of responsibility toward the land. Bioregional Orientation’s walks also involve creative writing and other projects that draw from the newfound insight gleaned from these hikes and the discussions that spring from them.

This month, Bioregional Orientation leads a walk along the floodplains of Tolay Lake Regional Park southeast of Petaluma on March 19, with a focus on natural and cultural history. In April, the workshop heads to the wetlands of the Laguna de Santa Rosa to discuss water management and more in connection to the Russian River. www.bioregionalorientation.com.—C.S.

If you believed the hype around the turn of the century, Dean Kamen’s two-wheeled Segway PT—known for awhile only as “IT”—was going to completely revolutionize travel in this country. We’d look at our cars, our bikes, our sidewalks differently once we mounted one of these quirky, self-balancing, two-wheeled electric vehicles. And yet, when the Segway was finally unveiled, there were problems, many of them. The transportation infrastructure was ill-equipped for this newfangled device, there was a recall over safety issues, the freaking things cost $5,000 and George Bush famously fell off one of them when he was president. But in the intervening years, the Segway has found its niche and utility. Sure, there are a few Segway owners still cruising down urban sidewalks, knocking down the Chinese food deliverymen, and some police forces have purchased and deployed them, but mostly they are just a really fun way to explore a city or a region. Witness the advent of the Segway Tour, which you can find everywhere from New Orleans to, yup, the Napa Valley. Napa Valley Segway Tours offers a number of options for would-be wheelers on those funky looking devices. Yes, of course there are wine tours, but you can also “Glide and Graze” local food purveyors for three hours ($99), and for the not-faint-of heart, repeat customer at Napa Valley Segway Tours, there’s a four-hour Segway adventure up Mt. St. Helena ($150) which sounds like a blast. napavalleysegwaytours.com.—T.G.

Best Whale of a FreshWater Spa

Taking the waters has long been popular with tourists and locals alike in the North Bay, and some say that the area provides spa services for our cetacean visitors, as well. When gray whales make their annual trip from the warm lagoons of Baja to the seafood smorgasbord of the Gulf of Alaska, they sometimes make a pit stop at the mouth of the Russian River. Perhaps they are feeding, as the Sonoma County Water Agency says, but it’s also been suggested that they might be enjoying the river outflow as a sort of spa treatment—there were dozens out there, I was told one day, mothers and their calves splashing about, putting on a show just yards away from the beach at Goat Rock. The jetty that the waves revealed several years ago provides a better view. I’ve hardly waited for 10 minutes when one dark shadow slips through the trough of a wave. Could it be? The sun is low, and I might be making too much of the shadows. Again, there it is—I think it is—gliding northward. Then a pectoral fin arcs over the water and sinks back into the shimmering waves, as the lone whale lolls about near the mouth of the river—as if to say, just to me, “Yep, you heard right. Gotta run now.” Then the visitor is gone. Sonoma Coast State Park, Jenner.—J.K.

This winter’s El Niño was highly anticipated by drought watchers, ski resorts, farmers and, not least of all, surfers. As predicted, El Niño has delivered a once-in-a-generation winter of outstanding waves. Too bad you had to be in Hawaii or south of the Golden Gate Bridge to enjoy it.

More often than not, El Niño–spawned storms create out-of-control conditions at west-facing local beaches in Sonoma County. There’s simply too much of a good thing. The one exception is Doran Beach. Because the cove-like beach faces south, large northwest swells wrap into it around Bodega Head in a smaller, more manageable size. And the north winds that often accompany storm surf blow offshore at Doran, meaning the wind blows into the face of the waves, holding them up and creating clean conditions and sneaky tube rides. Doran is usually good for a few days of surf a year, but thanks to
El Niño there have been days and days of fun, peeling surf.

Doran also gets my vote for most dangerous beach on the coast, if for no other reason than people take it for granted. Even though the beach’s geography means the surf is smaller than at, say, Salmon Creek, it’s still plenty powerful. When you combine Doran’s shallow water and fast, thumping surf, you’ve got a board-snapping and neck-cracking situation. I recently got six staples in my head to prove it.—S.H.

“Crosswalk flasher has been activated.” So you’re trying to cross Brookwood Avenue at Fifth Street in Santa Rosa, with a fat cup of nearby Soco Coffee on the mind. It’s a little traffic-y over here, and the cars have a tendency to whiz on by with indifference, so there’s a button you can push on the corner that stops traffic to allow pedestrians to cross. The button is apparently designed so that blind people can cross the street without getting run over. So that when you push the button, a robotic voice announces, “Crosswalk flasher has been activated.” Are you thinking what we’re thinking? Every time we hear this Siri-like voice, a little image pops into our devious mind, of a weird old man in a raincoat hanging out on the corner, who is activated as well, and flashes the passing cars. Of course the Santa Rosa Middle School is right there, so actually flashing the cars would likely get our old man listed on the state’s sex offender database. But it’s the thought that counts, and this thought is one of our favorite mid-day recreational activities.—T.G.

The Pacific Association of Professional Baseball Clubs had a great 2015. The independent league, which comprises four Northern California teams—the Sonoma Stompers, the Pittsburg Diamonds, the San Rafael Pacifics and the Vallejo Admirals—boasted one of the most exciting seasons in recent memory and saw one of their own represented in the Baseball Hall of Fame Museum.

Coming off of a 2014 championship, the San Rafael Pacifics were trailing in the standings through most of last year until bouncing back with a season-ending, eight-game winning streak to secure a spot against the Stompers in the title game last September.

That game turned out to be a nail-biter of a contest. The Pacifics got out to an early lead, only to see it vanish in the eighth inning as the Stompers tied the game 3 to 3. In the bottom of the ninth, Pacifics shortstop Danny Gonzalez won the game with a walk-off single to bring in Johnny Bekakis, giving the Pacifics their second straight league championship.

Even though the Stompers lost the game, they had the honor of seeing pitcher Sean Conroy become professional baseball’s first openly gay player, earning him and the team a place in the “Today’s Game” display at the Baseball Hall of Fame Museum in Cooperstown.

The 2016 Pacific Association baseball season opens in June, for schedules and tickets visit pacificsbaseball.com and stompersbaseball.com.—C.S.